I get lots of questions about how to identify aquatic insects, especially how you tell one apart from another that looks similar.  Most people are able to identify an adult beetle fairly well and the bugs are easy once you know what you’re looking for (see my post on the subject), but  many people seem to have a hard time telling the dragonflies, mayflies, and stoneflies apart.  The students I teach in my Aquatic Entomology class have a hard time with this at first too, so it’s not something that I’d expect most people to know how to do.  Still, it’s pretty easy once you know which insects have which traits.  Today I’m going to focus on the immature stage of the dragonflies and damselflies, the nymphs.  I’ll cover the adults in the next post and the stonefies and mayflies in my post after that.

Let’s go over what makes an odonate an odonate before we get into the two different groups.  This is what a standard odonate nymph looks like:

This is a dragonfly nymph and we’ll get to how to tell it apart from a damselfly in a moment.  Odonate nymphs generally have long bodies, large heads with large eyes, and long, slender legs.  You can see all of these traits easily in the image above.  However, some other things, like mayflies and stoneflies, share some of these traits, so you need to look for the specialized odonate mouthparts if you want to be really sure you’re looking at an odonate: 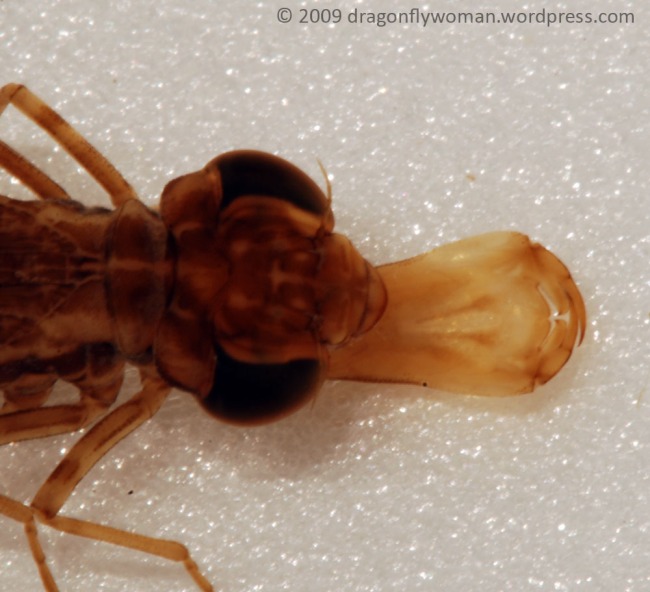 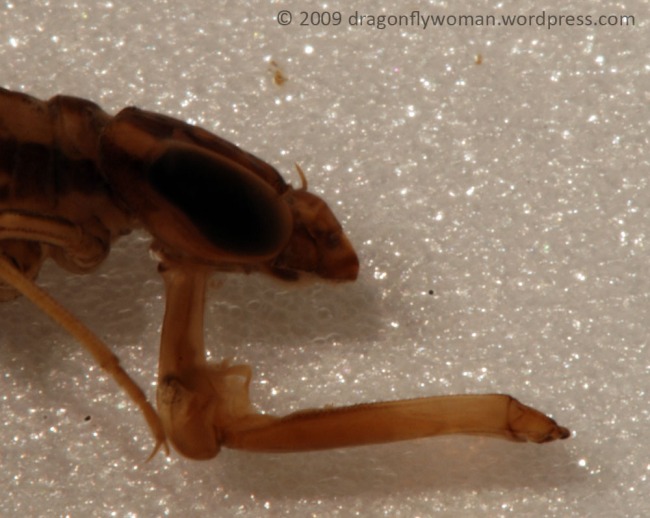 As you can see in the image above, odonates have a long, extendible mouthpart they keep folded up under their heads.  Odonates are predators and eat other insects, small fish, small tadpoles, and other aquatic organisms while they’re nymphs.  This specialized mouthpart is really cool because it allows an odonate nymph to hunt very effectively.  They are able to push the fluids in their body into their heads very rapidly, which causes the mouthpart to shoot forward with amazing speed.  Those little hooks you see at the end in the top view open and snap shut on the prey.  The mouthpart is then retracted, bringing the food into contact with the other mouthparts so it may be chewed up.  Pretty cool huh?  Granted, it’s hard to really understand how this works unless you see it.  I hope you’ll check out this video to see a dragonfly in action!

Okay, so all odonates have this mouthpart.  This is considered the defining characteristic of odonates in fact.  Nothing else in the world has this style of mouthpart, so if you see it, you know you’re looking at an odonate.  But how do you tell a dragonfly apart from a damselfly?  Let’s take a look at that dragonfly again:

The arrow points to the dragonfly’s rear appendages, which consist of 5 parts (cerci, epiprocts, and paraprocts – big words you don’t really need to know and I only mention for those who like to learn these sorts of things).  Notice how they are pointed in the back?  If you have an odonate with short, spiky rear appendages like this, you’re looking at a dragonfly nymph.  The other way you can tell this is a dragonfly is the shape of the body.  It’s long and slender compared to most bugs, but it’s pretty short and stout as far as odonates go.  So, a dragonfly nymph is an odonate (i.e., it has that funky mouthpart) that is stout bodied and has short, pointed rear appendages.

Now take a look at a damselfly nymph:

Can you see how this is different from the dragonfly above?  Take a look at the part the arrow is pointing to.  Like dragonflies, damselflies have appendages that stick off the back end, but they have 3 instead of 5.  They are also much longer and more flexible than the appendages in dragonflies.  This is because they are gills (more about gills in odonates in a moment) and not just pointy bits sticking off the back end.  Notice also the difference in body shape in the damselfly compared to the dragonfly.  Damselflies are much more slender along the length of their bodies than dragonflies and generally taper toward the end in a way that most dragonflies do not.

So, all odonates have the specialized, extendible mouthpart.  Dragonflies are odonates that have 5 stiff, pointed appendages on the back end and stout bodies.  In contrast, damselflies are odonates that have only 3 appendages (soft, flexible gills) and long, slender bodies.  Easy, right?!  Hopefully now you’ll be able to tell them apart in pictures or if you happen to find and/or see a live one.  There is a lot of variation in size, color, and shape, but dragonflies all share the characteristics described above and damselflies have their own set of characteristics.

I’ll end with a word about gills in odonates.  All odonate nymphs rely on gills to some extent.  The gills are obvious in damselflies, but where are they located in dragonflies?  Dragonflies actually have their gills INSIDE their bodies!  They have a specially modified rectal chamber within their abdomen and the gills line that chamber.  The dragonfly nymphs then pump water into and out of their rectal chamber to aerate their gills and absorb oxygen from the water.  This actually allows dragonflies to do one other cool behavior, but that is a story for another time.

Next time, I’ll discuss the differences between dragonfly and damselfly adults.  Most people probably encounter the adults more often than the nymphs, but few people seem to know the difference even in the adults.  It’s easy, so tune in next time!

8 thoughts on “Dragonflies and damselflies – What’s the difference? (Nymphs)”