This is a dragonfly: 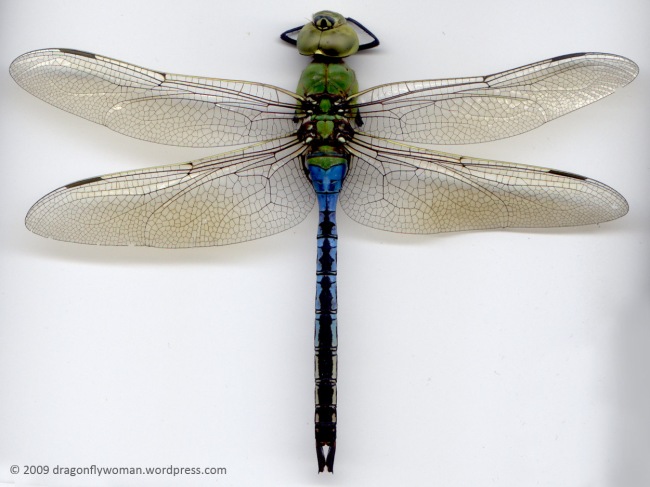 A few thing to notice about the dragonfly:

1) The eyes are broadly rounded and lie mostly flat against the head
2) The thorax (the green part the wings are attached to in the picture above) ismore broad than the abdomen (the blue part in this dragonfly)
3) The forewings and hindwings are different shapes
4) Body is quite large (The dragonfly in the picture, a green darner, is about 3 inches long!), though there is a lot of variation in size

All dragonflies share these characteristics.  Also, if you saw this dragonfly sitting on a plant or on the ground, it’s wings would be held in the same position you see in the picture, spread out flat and to the sides of its body.

Now compare the dragonfly picture to this picture of a damselfly:

Look for these things in the damselfly:

1) The eyes are largely spherical and protrude off the sides of the head
2) The thorax (the segment where the wings are attached) is narrow, about the same width as the abdomen
3) The forewings and hindwings are very similar in size and shape
4) Usually fairly small (at least compared to the dragonflies)

If you saw a damselfly resting at a pond, it’s wing would look different from a dragonfly’s.  Rather than holding it’s wings flat and to the sides of it’s body, it holds its wings straight up, pressed together over the top of its thorax.  This is what you would see in the field if you saw one from the side:

Ultimately, if you’re at a pond or river, the easiest way to tell whether an odonate you’re looking at is a dragonfly or damselfly is to look at how it holds it’s wings while resting.  If they’re lying flat, parallel to the ground, you are looking at a dragonfly.  If the wings are pressed together, held over the bug’s back, you’ve got a damselfly.  So what happens if the odonate you’re looking at doesn’t ever stop flying?  Let’s think back to the difference between perchers and fliers from my last post.  Fliers are almost always dragonflies and damselflies are almost always perchers.  If it doesn’t stop to rest every few minutes, it’s probably a dragonfly.

Okay.  Now imagine you have two pinned odonate specimens, one dragonfly and one damselfly, rather than seeing them in the field.  The wings are spread apart on both.  Can you tell the two insects apart?  We know you should look at the shape and location of the eyes, the width of the thorax, whether the forewings look like the hind wings, and the size of the body.  See if you can tell which one is which in this picture:

A dragonfly and a damselfly - can you tell them apart?

The answers are listed below so you can’t cheat!  Scroll down to check your answers.  Hopefully you got them right!

If you have problems remembering the difference when you don’t have a list of their characteristics sitting right in front of you, here’s a good way to remember them.  Think of the names of these insects, dragonflies and damselflies.  What sorts of images do these names conjure in your mind?  I personally think of medieval stories about dragons holding damsels in distress hostage to use as bait for daring knights.  Think of dragonflies as you would the dragon in this image: robust, strong, powerful, and really big.  The damselfly is more like the damsel in the dragon and the damsel image.  They are smaller, softer, and weaker than the dragon.

One final note about dragonflies and damselflies as I finish this up.  The odonates have become very popular with non-scientists recently and dragonfly watching has become a sort of sport similar to bird watching.  With the publication of several excellent field guides which contain all of the species in a region or the country, it is easy for people who are not familiar with insects to identify the dragonflies and damselflies they see without specialized training or equipment.  All you need is a good field guide and a pair of binoculars!  If this is something that interests you, I have two field guides that I haul around with me when I’m out camping, bug collecting, on class field trips, etc, that I would like to recommend.  The first is Dragonflies Through Binoculars by Sidney Dunkle.  The book is about $30 retail (less on Amazon.com) and covers all of the dragonflies in the U.S.  The book contains excellent distribution maps and flight season information, color photos of every species, the common and scientific names for every species, and multiple pictures for species where the males and females (and sometimes the younger males) are different colors.  The descriptions for each species highlights the distinctive characteristics you should look for to tell them apart from other similar species.  It’s a really excellent book.  The downside: no damselflies!  I recently acquired a book that covers dragonflies AND damselflies in the western U.S., Dragonflies and Damselflies of the West by Dennis Paulson, so that I have a field guide for the damselflies too.  It has many of the same features as Dunkle’s book and costs about the same, but includes both dragonflies and damselflies.  The downside to this book: the book doesn’t cover the whole country, so you need another book if you’re going somewhere east of Kansas or Nebraska.  Still, it gets the job done in my area and I find it very useful.  Dragonfly watching is a fun activity and I hope you will give it a try!  There’s nothing quite like the feeling of checking another dragonfly, one you’ve never seen before, off your checklist.

36 thoughts on “Dragonflies and Damselflies – What’s the difference? (Adults)”