I’ve already posted twice about the dragonfly swarm my friend and I came across last week on the lake where we work, Lakeside Lake in Tucson.  While we watched the swarm, we also collected some of the dragonflies to add to our insect collections.  Because dragonflies tend to lose their colors VERY quickly in collections, it has become common practice for dragonfly enthusiasts of all levels of expertise to scan their specimens on standard flatbed scanners to preserve the colors as they are in life.  If you would like more information how to make your own dragonfly scans or would like to see some amazing images made using this process, I recommend taking a look at the website Digital Dragonflies.  (This is a great website to consult if you want to try to identify a dragonfly you’ve seen and you don’t have a field guide.)  Or check out the book written by the Digital Dragonfly creators, A Dazzle of Dragonflies. This book is absolutely gorgeous and I recommend it to anyone with even a passing interest in dragonflies, even if you only look at the pictures.

We found 4 species of dragonfly in the swarm, all of which are common in the Tucson area.  We’ve seen all of these at Lakeside many times, just not in the numbers we saw in the swarm.  I only managed to catch three of the four species (and if you know anything about catching dragonflies, especially these particular species, you know that’s pretty good!), so I’ll only go through the ones I have images for.  First, let’s meet the wandering glider, Pantala flavescens: 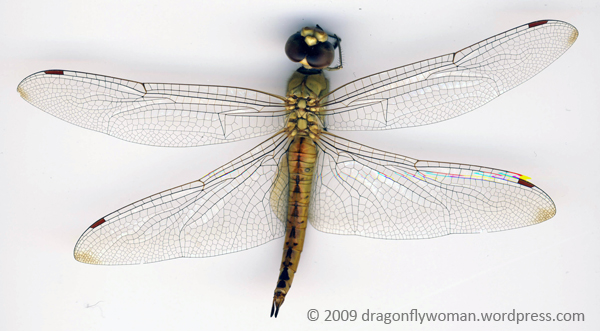 This handsome dragonfly is my favorite of all the dragonflies.  (If I ever get a tattoo, this is what I’m getting!)  This is a fairly common dragonfly in the Tucson area, though I find they’re much more abundant during the monsoons than at other times of the year.  This might have to do with a behavior they exhibit – they sometimes travel very long distances in front of storms!  I’ll post more about Pantala flavescens in a future post, but for now just know they’re amazing insects.  For a relatively boring looking dragonfly, it’s certainly got some fantastic behaviors.

How can I tell this is a wandering glider?  There are several ways.  This is a fairly big dragonfly with a wingspan of about 2 inches.  When they fly, they tend to appear brightly yellow-orange. There aren’t  many dragonflies with this sort of coloration, so it’s distinctive.  They are also fliers and rarely perch.  When they do perch, they tend to rest vertically (perpendicular to the ground) instead of horizontally (parallel to the ground) like other species.  If you manage to be lucky enough to catch a male, like the one above, and look at it head on, his face will be bright orange.  His eyes, as you can see in the image above, will be reddish.  His abdomen will be yellow to orange with black spots that widen the further down the abdomen you look.  And finally, the cerci (those little pointy bits sticking off the back end) are black.  This dragonfly gets its common name of glider from the shape of its wings.  See how the hindwings are much more broad than the forewings?  This is a flight adaptation that helps make them one of the strongest fliers of all the dragonflies.  There aren’t all that many dragonflies with wing structures like this, so if you see it, you can narrow down your options quickly.

This dragonfly, the spot-winged glider (Pantala hymenaea), is closely related to the wandering glider:

Compare the wings of this dragonfly to the image of Pantala flavescens above and you’ll see they’re about the same shape.  That makes this a glider as well.  These are very easy to tell apart from their other Pantala relatives, even though they do rest vertically, are also fliers, are about the same size, and have very similar shapes.  In flight, these dragonflies will look reddish or brown instead of yellow.  The eyes are grey with a reddish spot on the top, so they’re not red all over as they are in P. flavescens.    Their faces are red instead of yellow.  The easiest way to tell this dragonfly from the previous one, however, is the dark brown, round spot at the base of the hindwings.  It’s visible in the image above and if you look closely, you will be able to see it when these dragonflies are in flight.  In fact, you can see it in one of the photos I posted in my last post.  If you see a dragonfly with very broad hind wings with a dark, rounded spot at their base, you’ve got a spot-winged glider.  However, sometimes in flight they can be difficult to tell apart from the saddlebag dragonflies, the group to which the last species I’ll discuss here belongs, at least to the untrained eye.  This dragonfly is Tramea onusta:

It’s also called the red saddlebags.  All of the saddlebags (we have 6 species of Tramea in the United States) have broad hindwings like the gliders and are likely close relatives.  However, they have dark, broad bands on their wings that run along the base of the wings from the top to the bottom.  These bands can be narrow or wide and the width will help determine which type of saddlebag you have.  For example, here in Arizona, we have four species of saddlbags.  I can tell this is a red saddlebags because the body coloration is distinctly reddish and the band on the wings is wide.  The Antillean saddlebags and striped saddlebags, though reddish, both have narrow bands.  And it’s very easy to tell this dragonfly apart from the black saddlebags, a dragonfly you commonly find in the same locations as the red saddlebags in Tucson, because the red saddlebags are red and the black saddlebags are black.  (Bet you didn’t see that coming!)  The saddlebags are pretty easy to tell apart from most other dragonflies based solely on the dark band on their hindwings.  If you see a dark stripe running along the base of the hindwings, it’s a good bet you’re looking at one of the saddlebags.

The last species we saw was the black saddlebags, Tramea lacerata.  They’re the only black saddlebag species, so they’re very easy to tell apart from the others!

Since I wrote about the swarm last week, I’ve received several comments and e mails about swarms that other people have seen.  The four species we saw in this swarm are known to do this swarming behavior and it’s common for them to swarm in mixed groups like the one we observed.  I’ve been hearing reports of many other dragonfly species forming swarms though.  If you see a swarm, it might include these speices (and hopefully you can identify them now if it does!), but it could include other speices as well.  Regardless, if you happen to see one of these swarms, consider yourself lucky!  It’s an amazing thing to see so many dragonflies flying around together at one time.

I’ve been on a big dragonfly kick recently, but next time I’ll be shifting gears to my own research.  I’m making a trip up to Phoenix next week to do some research in a lab at Arizona State University, so it’s time to introduce you to my research study subjects, the amazing giant water bugs!

4 thoughts on “Dragonflies from the swarm”