Okay, okay.  I know I said I’d talk about the giant water bugs next, but I just had to stick in this quick little post first.  Ants have been on my mind quite a bit recently, so I thought I’d share something fun I observed the other day.

Every summer since I’ve lived in my current home, we’ve ended up with a lot of ants in our house.  Mostly, they’ve stayed in the kitchen and in the soil of one potted plant, but they’ve spread out a lot this year and are now in the living room and the bathroom too.  They’re pretty annoying actually because they get on everything – dishes that aren’t absolutely clean, any crumbs on the counter or floor, and they seem to really, really love the metal sink and faucets.  They’re tiny little ants that belong to the genus Brachymyrmex.  (At least I’m pretty sure they are Brachymyrmex.  I have several friends who are serious ant people and if they say my house ants are Brachymyrmex, I don’t question them.)

Ants generally fall into two categories: ants that make and follow trails and ants that do not.  When I teach insect behavior, my students do a lab where they look at two different types of ants and determine which of the two is the trail maker.  Pretty fun activity really, but not when they’re making trails in your kitchen.  My house ants are definitely trail makers.  You can see long lines of them running along the counter and can follow the trail back to the place they are getting into the house.  This makes it easy to watch them because they’re all moving through the same areas in large numbers and make themselves very conspicuous.  This trait was beneficial one day when the ants attacked a dying pinacate beetle (often known as a stink bug – the black beetles that stick their butts up in the air!) that somehow got into my kitchen cabinet.  I could smell the beetle all day (they’re called stink bugs for a reaason!), but I couldn’t find it until I noticed a line of ants flowing into a cabinet that contained only canned foods.  There wasn’t any food available in there, so I popped the door open to see what they were doing.  There was the pinacate beetle, being devoured alive by ants.  It’s the one time I was actually happy the little buggers were in my kitchen.  That beetle smelled really bad!

Last week, my fiancee left an empty birch beer bottle on the kitchen counter.  The ants, being able to find food anywhere (I marvel at their ability to find food in the most random places), ended up discovering the tiny layer of sugary fluid at the bottom of the bottle and were happily sucking it down.  I wouldn’t have noticed they were in the bottle at all except I saw this: 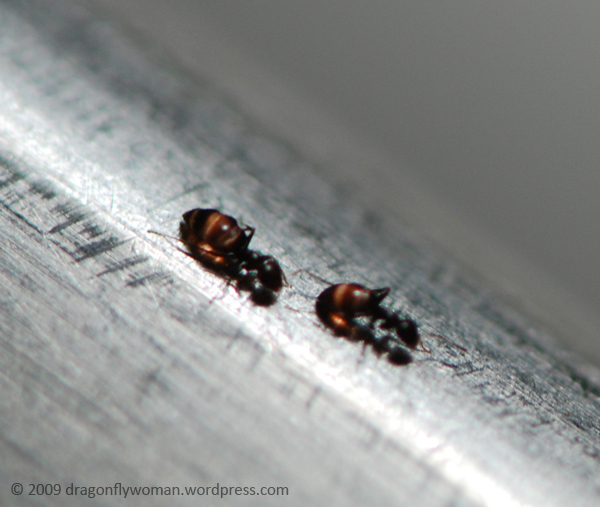 I know the photo’s a little blurry – the ants were moving REALLY fast, so it was hard to get a good picture – but do you see how swollen they are?  They are so full of sugary birch beer, you can see the soft connective tissue between the hard plates that make up their exoskeleton!  Those sections are stretched so tightly, you can actually see the light passing all the way through the ants and shining onto the metal of the sink below them.  These ants were going back to the nest, completely full of food.  Furthermore, they were tapping ants coming the other way with their antennae.  This was likely a form of communication between the incoming ants and the outgoing ants, one that perhaps told the outgoing ants from the nest where the food was or something about it’s quality and/or abundance.  It’s pretty common to see trail making ants doing an antennal tapping behavior, at least in the trail making ants I’ve observed.

Compare the “full” ants heading back to the nest with their bounty to these “empty” ants that were just leaving the nest: 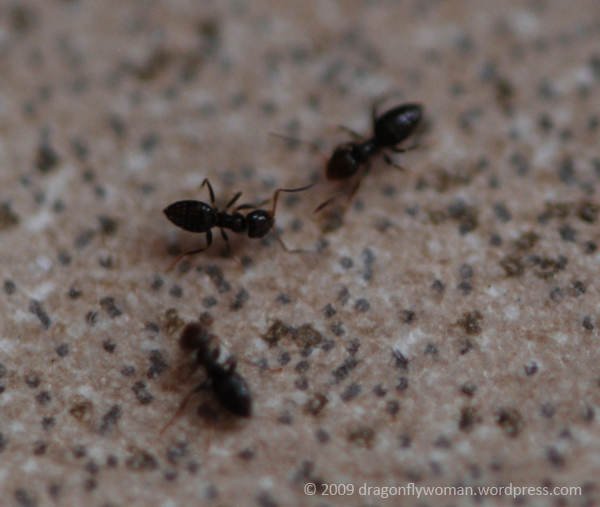 The abdomens of these ants are tighly compacted.  You can’t see the soft connective tissues between the plates of the exoskeleton, so they look solid black instead of striped and reddish like the ants in the previous photo.  These ants hadn’t gotten to the birch beer yet, so they haden’t collected food.  Had I left the bottle on the counter, they would have climbed in, drank the liquid at the bottom until they were as full as they could be, and gone back to the nest looking like the ants in the picture above.

Even though I really hate the ants in my home, I couldn’t help but enjoy spending a few minutes watching these swollen, completely stuffed ants lazily returning home after the best meal of their lives.  I don’t know – something about an ant that has eaten so much it can barely move can hold my interest for ages.  If you happen to have ants in your house, especially if you see lines of them traveling back and forth across your kitchen counters, take a look at the ones headed back toward the walls.  Chances are, if you’ve left a sugary liquid out, even only a tiny amount, the ants will find it and you will be able to observe your own entomological gluttons!