Before I get back to the water bugs, I want to continue my detour for a few posts and talk about some dragonflies I saw yesterday.  I needed to take some dragonfly photos, so my fiancee and I went to a constructed wetland in Tucson called Sweetwater to shoot.  Sweetwater is part of one of the wastewater treatment plants in Tucson and is fed entirely with reclaimed water and secondarily treated wastewater.  It can smell pretty bad at times (it IS made up of treated wastewater after all), but if you can overlook the scent it’s gorgeous and wholly worth a visit.  All those nutrients in the water do wonders for the plant life that grows in the water: 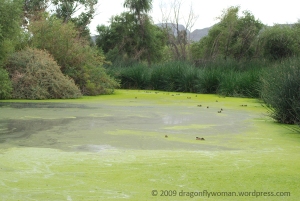 As you can see, the nutrient-rich water of the wetland is able to support a wide variety of aquatic plants.  Yesterday, the wetlands were full of cattails (the dark green bushy looking things on the right side of the picture), rushes, sedges, and duckweed.  Most of the bright green stuff floating on the water in this picture is duckweed, NOT algae, though there was definitely algae there as well.  The wetland also suports a variety of trees and shrubs and many different species of wildlife.  All those dark spots in the picture are ducks.  I’ve also seen several snakes and lizards, many other birds, and even a bobcat once!  And then there are, of course, the dragonflies.  Thousands of them.  I think Sweetwater is the best place in Tucson to see dragonflies.

We saw several dragonfly species, including green darners (Anax junius), arroyo darners (Aeshna dugesi), blue-eyed darners (Rhionaeshna multicolor),  flame skimmers (Libellula saturata), roseate skimmers (Orthemis ferruginea), blue dashers (Pachydiplax longipennis), Mexican amberwings (Perithemis intensa), variegated meadowhawks (Sympetrum corruptum), and black saddlebags (Tramea lacerata).  We also saw one species of damselfly (though we weren’t really looking hard for the damselflies either – there may have been more), the desert firetail (Telebasis salva).  Most of the dragonflies were flying above the cattails or were resting on them in various positions.  Some were even in the obelisk position, which I have talked about before in another post on dragonflies.

I got some good shots of several different species, which I’ll go over in my next post.  However, I was most thrilled with all of the large flying dragonflies, the darners.  I like taking pictures of flying dragonflies the best because they are the hardest to shoot.  This is the same reason I got interested in dragonflies in the first place – catching dragonflies for my collections for 4-H was the biggest challenge.  I have yet to get a really, really good shot of a flying dragonfly, but I keep at it, and I got some pretty decent shots today.

This is Anax junius, the green darner: 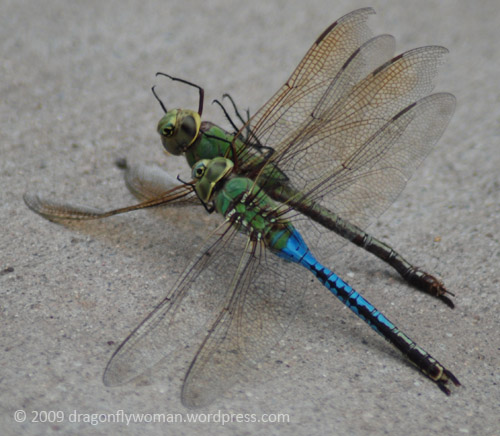 This is a mating pair.  The male, the more brightly colored one with the blue abdomen, had just grabbed his mate in preparation for mating, and then they promptly fell out of the tree onto the sidewalk, right next to me!  They sat there in this position for almost a minute while I snapped away with my camera.  Then they flew off to mate and lay eggs.  Anax junius was very abundant at Sweetwater yesterday, so I ended up getting a lot of pictures of them.  They are fliers, so they don’t land very often.  That also makes them fairly hard to photograph – they don’t sit still for very long.  So, most of the photos I got were of these insects flying, and most of them looked like this:

The little smudge in the photo at the tip of the big blue arrow is the dragonfly!   I took about 90 photos of Anax in flight, and these were the best:

What I particularly liked about these images, aside from the fact that they are actually mostly in focus, is that you can see the legs of the dragonflies folded up underneath their thoraxes.  Having the legs folded up under the body likely helps the dragonflies fly more efficiently.  If they let their legs dangle down underneath them, they are likely to slow the dragonflies down, get snagged on the vegetation when they fly low, and otherwise cause problems.  So, they fly with them tightly folded under their bodies and only stretch them out when they grab food in midair.  It’s fun to be able to see that they do this, but it would be hard to see by observing them directly because they fly so fast and so erratically.  It’s easy to see in the photos.

Like in my post on the species from the dragonfly swarm, you can clearly see from these photos that dragonflies are able to move all four of their wings independently from one another.  For example, in the top photo, you can see that the forewings are both moving down while the hindwings are moving up.  This ability to move their wings independently contributes significantly to the amazing agility that dragonflies exhibit.  If you’ve ever seen dragonflies flying, you know how fast and agile they are.  They can stop in midair, make 180 degree turns, fly backwards, hover, and do all sorts of other things that are nigh impossible for most flying animals.  They dart all over the place, which is why it’s hard to get photos of them in flight.  If you’re dealing with a flier species, such as Anax junius, they are going to be moving constantly too.  Another reason it’s hard to get good photos of dragonflies in flight is the behavior you see in this photo:

Dragonflies are highly territorial and protect their territories from other dragonflies that might be trying to steal their access to prime egg laying habitat or other valuable resources.  In flier species, the males typically patrol, or fly within the boundaries of their territories, looking out for females to mate with, food, and males who might want to try to claim the territory for themselves.  In this photo, the dragonfly at the top tried to steal the territory that belonged to the dragonfly on the bottom.  The owner of the territory, the dragonfly on the bottom, successfully chased the would-be thief out away from his territory.  In the photo, the territory holder is returning to his territory to continue patrolling while the loser is flying away to find another spot, hopefully one guarded by a wimpy male.  Because there are usually fewer territories available than dragonflies at a pond, these battles are constantly occurring.  When a male sees another male that might enter his territory, he will immediately change directions and charge the tresspasser in an attempt to protect his territory.  This means that the dragonflies are darting back and forth constantly.  You might track one dragonfly and just be ready to snap a photo when he stops, turns around, and zips off in a completely diferent direction.  It’s very hard to predict where a dragonfly is going to be at any given time, so it is difficult to get good photos of them in flight.

Next time I’ll go over how to identify some of the species that we saw at Sweetwater, then it’s back to the giant water bugs for a while!

5 thoughts on “A Trip to Sweetwater Wetlands”