I believe that almost all entomologists have at least one arthropod or other animal that they really don’t like and find disturbing on some primal level.  Several of my best entomologist friends, including one who thinks ticks are the best animals ever, think roaches are the most vile beasts on Earth.  A herpetologist friend of mine gleefully handles rattlesnakes but completely loses her nerve when faced with a scorpion.  I know several biologists who are terrified of grasshoppers and other jumping insects, and even a few who really hate moths.  I personally don’t have any problem with roaches, or most other insects for that matter.  But there is one arthropod that I find incredibly disturbing, and that animal is the centipede.

Something about a centipede screams “This is an unnatural spawn of the devil!” to me.  I really, really hate them.  REALLY hate them.  They terrify me beyond almost any other animal.  I am not a scream at the top of my lungs kind of gal, so there’s rarely girlie shrieking involved when I come across one, but serious chills do run down my spine and I always involuntarily shudder.  Just thinking about them makes me anxious!

Because I dislike them so much, it figures that I live in a place that has some of the biggest centipedes in the world.  Meet Scolopendra heros: 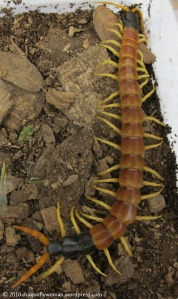 This beast is also known as the giant redheaded centipede, which is yet another example of biologists giving organisms highly descriptive (aka, uncreative) names.  As you can see, this is an arthropod with many legs, but only one pair per segment, which makes it a centipede.  This thing is about 6-8 inches long, so it’s giant.  And it has a red head, hence redheaded.  I feel like I should think this centipede is beautiful and I certainly don’t begrudge anyone who does.  The colors really are fantastic!  And the ones in Arizona have even more red on them than the individual pictured here (there are several different color variations in this species).  Still, these are things of nightmares for me.  I think the problems I have with these animals are based on the fact that they are venomous (they’re predators and use their venom to subdue their prey) and they are fast.  Very fast.

Now that you know a bit more about these centipedes, allow me to tell you a story about an encounter I had with one.  If you’ve been keeping up with my blog, you’ve probably read about my field site already.  One day a few years ago, my advisor and I were made our daily summer trip to the pond to collect water bug eggs.  I strapped my waders on and climbed out into the pond as usual.  However, the water was remarkably clear that day and I could actually see all the way down to the bottom for the first time ever.  What I saw there, however, was horrifying: a Scolopendra heros sitting on the bottom of the pond, right by one of the sticks I needed to check for eggs.  The conversation with my advisor went something like this:

Me: (Yells to advisor) Whoa!  There’s a Scolopendra on the bottom of the pond here!
Advisor: That’s great!  Pick it up and bring it over here!
Me: Oh hell no!  I’m not picking it up!
Advisor: Chris, don’t be a wimp.  Pick it up!
Me: No!  I don’t think it’s dead.  (Pokes it with a stick to see if it moves.)
Advisor: It’s not moving?
Me: No.  (Poke, poke)
Advisor: If it’s not moving and it’s on the bottom of the pond, it’s probably dead.  Just pick it up!
Me: (A bit of hysteria creeps into my voice) No!!!  I’m not picking it up, even if it IS dead!  I hate these things!  But I really don’t think it’s dead…  (Poke, poke)
Advisor: (Shakes head sadly, conveying his utter disappointment at my squeamishness.  I have clearly failed his test of entomological robustness.)

In a bout of sheer wussiness, I eventually consented to pick the thing up with a stick.  I draped it’s limp body over the very far end of the three or four foot long stick and held it as far away from my body as I could, just in case it suddenly came back to life.  I was terrified I would get stuck in the mud and fall over and I could just see the demon spawn I was carrying flying through the air and landing on my head.  But, I made it to the shore unscathed and made my advisor hold a bag open for me (which he did only after making fun of me again) so I didn’t have to get the centipede close to my unprotected hands.  I was in the process of making an insect collection for a K-12 outdoor education center and knew it would make a good addition to my collection.  My advisor handed the bag to me and I quickly tied it shut.  I carried it back to the car holding it out from my body and grabbing only the tiniest part of the corner furthest from the centipede so I could keep it as far away from me as I could.  I kept looking at it and expecting it to wake up.  I was absolutely convinced that it was still alive.  I happily tossed it in the plastic box with my waders and slammed the lid on, thankful the centipede would be riding home in the back of the truck while I was safely in the cab.

When I got home, I carefully carried my wader box inside and pulled the lid off slowly, carefully peering in and expecting to see a lifeless centipede inside.  What I saw instead was exactly what I had feared!  The centipede was indeed still alive and was now running frantically around the bag.  I imagined that it was now a very angry venomous creature trapped in a very thin film of plastic that I was sure it could find a way out of.  I had to do something and fast!  My worst nightmare was about to come true: a livid centipede bearing down upon me across my kitchen counter while I was paralyzed in fear and helpless to prevent its leaping onto my face.  (Okay, so I have a vivid imagination!)  I grabbed the corner of the bag, the one now holding a squirming, probably unhappy centipede, and tossed it into the freezer, slamming the door shut before slumping against the fridge door and sighing in utter relief.  I conquered the menace that was the evil centipede!  And I was preserving it for a good cause, thereby killing two birds with one stone.

Or I would have been killing two birds with one stone except I’ve never taken it back out of my freezer.  I’m too creeped out by it to retrieve it from it’s frigid habitat.  Knowing it’s in there still is bad enough (and I carefully avoid it when rooting around in there for food), but actually getting it out, facing it’s horribleness once again?  Well, that’s just not going to happen willingly.  The real question is, when I eventually move, will I have the courage to take the centipede out and finally add it to a collection, or will someone from the rental company be in for a very nasty surprise?  I can’t say for sure until that day comes…