I’ll admit that I am a bit A.D.D. when it comes to biological research.  I find everything interesting!  This makes it hard for me to focus on one specific thing all the time, so I have a lot of little side projects going at most times.  (And if any of you are in grad school out there, this is NOT the way to finish quickly!)  However, if I were to say I had one specialty, insect respiration (particularly respiratory behaviors) is it.  So, it’s time to dive into the science of insect respiration!  The next 3-4 major posts will focus on several different facets of insect respiration (finishing up with another From the Literature post), but today I’m going to go over the basic system of insect respiration, the one you would find in most typical terrestrial insects.

Humans have a rather complicated respiratory system.  We use our lungs to draw oxygen into our bodies through the nose and mouth.  Our lungs branch and branch and branch some more, and air travels down these branches until it reaches the alveoli, small air sacs at the very end of the lungs.  These air sacs are very thin.  The capillaries (part of the circulatory system) that run along the outside of the lungs are also very thin.  This allows oxygen to travel from inside the lungs, through the lung tissue, through the capillary tissue, and into the red blood cells inside the capillaries.  The red blood cells then carry the oxygen from the lungs to other parts of the body and deliver it to needy cells.  The human respiratory system requires both the lungs and the circulatory system to function.

Insects are much less complicated than this.  For starters, they don’t have much of a circulatory system.  They have a blood-like substance called hemolymph filling their bodies, but it tends to slosh around inside without a lot of direction.  If you don’t have a fancy circulatory system that directs blood into specific areas, you can’t depend on your blood to transport oxygen from the outside of your body to your cells.  So, insects use a different system.

A spiracle on a caterpillar. The blue arrow points to the opening.

Most people know that insects are divided into three major body sections: the head, thorax, and abdomen.  You may not know, however, that these main body segments are made up of several subsegments.  The thorax is divided into three sections called the prothorax (pro means forward), mesothorax (meso means middle), and metathorax (meta means after).  The abdomen of a typical insect is made up of 11 subsegments.  So why do we care about these subsegments?  Because most or all of these subsegments contain a pore in the insect exoskeleton that allows oxygen to enter the insect.  These pores are called spiracles.  Take a look at the caterpillar image and you’ll see several of these spiracles running down the length of its body.  Many insects have muscles associated with their spiracles that allow the insect to open and close them on command.  Other insects leave them open all the time and some don’t have spiracles at all!  But most insects do, so we’ll focus on the ones that do here. 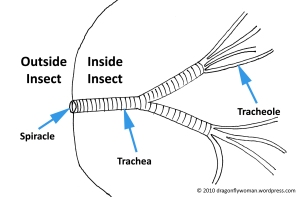 Spiracles connect the air outside the insect to the inside of the insect where it is needed by the cells.  The spiracles connect to the tracheae (plural of trachea), big, open tubes that travel from the spiracles some way into the body.  The tracheae then branch again and again into ever smaller tubes.  At some point, the diameter of the tubes gets so small the tubes become tracheoles.  Air passes to the end of the tracheoles and is delivered to a single cell or a small group of cells, where it is taken in and used for necessary cellular functions.  So, unlike the human system where air is collected in the lungs and is then transported to cells via the blood, the insect respiratory system delivers air directly to the cells!

You may be wondering how air gets into that system of tunnels in insects.  Well, many insects don’t “breathe” the way that humans do.  Humans have a muscle called the diaphragm that causes us to take breaths as it contracts and relaxes.  While some insects do use their muscles and simple air sacs to actively pull oxygen into their respiratory systems, many do not.  These insect depend entirely on a property of physics called a concentration gradient.  A gradient forms when oxygen (or another gas or a liquid or a chemical or molecules) is in a lower concentration in one location compared to another, i.e. there are fewer molecules of oxygen in one place than another.  When concentration gradients form, molecules tend to move from areas of high concentration to low concentration to restore an equilibrium between the two areas.  This happens in the insect respiratory system.  The insect cells use the oxygen that has traveled down the tracheal system, so there is less oxygen at the end of the tubes than there is outside the insect.  So, molecules of oxygen pass into the tracheal system to replace the oxygen that was used and end up at the tips of the tracheoles.  These molecules are also used by the insect’s cells, so more oxygen enters the tracheal system to compensate.  Thus, oxygen continues to flow into the respiratory system and the insect is continuously supplied with the oxygen it needs to survive.  This same system also takes the carbon dioxide the cells produce back out via the same process in reverse.

What I’ve described here is a sort of basic, generalized model of insect respiration, and a terrestrial one at that.  There are many, many variations on this theme.  Some insects use what is called ventilation and actively pull oxygen into their respiratory system, such as those insects I mentioned above that use muscles and air sacs.  Other insects use a system called discontinuous gas exchange where they hold their spiracles shut most of the time and then open them quickly every now and again, likely to conserve water.  These insects sort of hold their breath and then take in big gasps of air only when they really need to.  Aquatic insects exhibit many variations on the basic insect respiration plan that allow them to breathe more efficiently in water.  These adaptations will be the focus of my next post, so I hope you’ll stay tuned!