If you’ve been keeping up with my blog in the last few weeks, you already know about the basic insect respiratory system and how aquatic insects breathe.  As you know, aquatic insects have a wide variety of respiratory adaptations that allow them to breathe in water, adaptations that have enabled them to live in water after insects developed on land.  However, aquatic insects can improve their ability to breathe underwater (i.e. improve their respiratory efficiency) by choosing to live in areas that have more oxygen (a higher dissolved oxygen content) or by using a variety of behaviors that allow them to take more oxygen from the water.  These are the topic of today’s post! 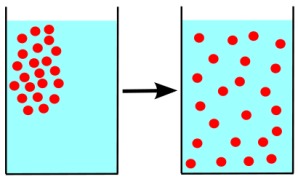 Molecules move from areas of high concentration (on the left) to areas of low concentration so that they are evenly distributed throughout (on the right). Image taken from Wikipedia.

There is a lot of physics involved in understanding how insects are able to breathe in water and you’ll need to know some of the basics.  The most important thing to remember is that molecules, in general, want to be evenly distributed.  If there are more molecules of one type in one area versus another area, a concentration gradient forms (see my post on terrestrial insect respiration for more information about concentration gradients).  Molecules then tend to move from areas of higher concentration to areas of lower concentration (see image at right).  This happens with oxygen in both air and water and is the reason why the insect respiratory system works at all.

However, oxygen moves very differently in water than it does in air.  Most importantly, oxygen moves much more slowly in water than in air – up to hundreds of thousands of times more slowly!  If you allow an open container of water that has no dissolved oxygen in it to sit, oxygen will eventually become distributed throughout the water in the container, but it will take a very long time to do so.  And even when it does become evenly distributed in the water, there is still far less oxygen in the water than there is in air.  In air, oxygen has a concentration of about 210,000 parts per million.  This means that for every million molecules of the gas mixture we call air, 210,000 of them are oxygen.  In water, a concentration of 5 parts per million oxygen is considered pretty good and oxygen concentrations max out at only about 15 parts per million.  So, oxygen takes a very long time to move through water (it diffuses from areas of high concentration to areas of low concentration) and is present in only very small amounts.

The concentration of oxygen in water (the amount of oxygen in water, the parts per million) depends on a variety of factors.  Any movement of water will increase its dissolved oxygen concentration.  Turbulence of any sort, whether caused by wind, stream flow, objects in a stream, etc, stirs the water so that oxygen from the surface is pulled further into the water more quickly than if the water was still.  Water is also able to hold more oxygen when it is cold than when it is warm.  Very cold water, close to freezing, can hold nearly the maximum concentration of oxygen, close to that 15 parts per million.  Very warm water, like what you get in Arizona during the summer, might only hold 2 or 3 parts per million oxygen at best.  Finally, in general, water that has a lot of organic pollution, algae blooms, or is otherwise compromised often has less oxygen than waters that are very clean.  Pollutants and some biological organisms consume oxygen, driving the concentration of dissolved oxygen in the water down and making less available for the everything else to use. 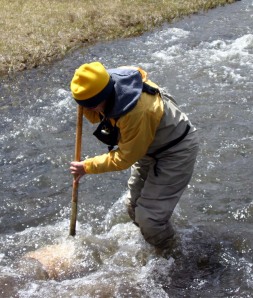 An exmaple of a fast flowing, cold water stream where stoneflies like to live. I know it doesn't look like it in the picture, but the water was really ripping! This stream is in the White Mountains of AZ.

These facts have some important implications for aquatic insect respiration.  Let’s consider the types of habitats that aquatic insects live in.  Insects that need a lot of oxygen are going to live in places that have a lot of oxygen rather than places that do not.  Stoneflies, for example, live in very high oxygen environments – at least by aquatic standards.  They are usually found in fast flowing, very cold water streams.  Many of these streams have a lot of turbulence as well.  This type of water generally has about the maximum dissolved oxygen concentration possible.  And some stoneflies have large gills, which allows them to absorb even more oxygen from the water!  You probably won’t ever see a stonefly in a warm, slow flowing, polluted stream.  However, you might find a bloodworm there!  Because bloodworms have hemoglobin, they are able to live in very low oxygen environments where many other insects are unable to live.  Their bodies are designed to attract oxygen so that they are able to draw in oxygen even when there is only a tiny amount available in the water.  In fact, in some very polluted, slow flowing or still waters (like the water you find coming out of some poorly designed wastewater treatment plants), bloodworms might be the only insects in the water at all!

A predacious diving beetle in water. The blue part at the back is the portion of the air bubble the beetle carries with it underwater that it exposes to the water. This allow the beetle to use the bubble as a physical gill.

Concentration gradients allow some other nifty things to happen for insects that carry air with them underwater, those insects that use the scuba tank style of respiration like the beetle at the right.  In my last post, I said I would explain why a giant water bug might want to expose the air bubble it carries under its wings to the water, and here’s the reason!  When an insect carries a bubble of air with it underwater, the concentration of gasses in the bubble are those found at the surface, about 21% oxygen, 78% nitrogen, and the rest a mixture of other gases including carbon dioxide.  When the insect dives underwater, it begins to consume the oxygen in the bubble.  However, the bubble wants to remain at equilibrium, it wants to keep its gas composition the same as the atmosphere at the surface.  If the insect is using oxygen from the bubble, the equilibrium is thrown off – the oxygen level is no longer at 21%.  But if the insect happens to expose its bubble to the water (see the blue air bubble at the back of the beetle in the image), oxygen will actually flow from the water into the bubble, replenishing the oxygen lost!  This works because, even though there is much less oxygen in water than in air, oxygen makes up a greater % of the gases dissolved in the water (about 35%) than in air (21%).  This sets up a concentration gradient so that oxygen flows from the area of higher concentration, the water, to the area of lower concentration, the bubble.  This type of respiration is called physical gill respiration because the insect is using the air bubble like a gill.

Now, it may seem like a physical gill would allow an insect to remain underwater indefinitely, but this is unfortunately not the case.  As the oxygen is consumed by the insect, the concentration of oxygen in the bubble decreases and the gas mixture is thrown out of equilibrium – the ratio of oxygen to nitrogen is no longer the same.  Remember how the bubble wants to remain at equilibrium?  Well, it will do whatever it needs to so that equilibrium is restored.  There are two ways to do it: increase the oxygen in the bubble or decrease the nitrogen in the bubble.  As oxygen is consumed, nitrogen starts to flow out of the bubble to restore the equilibrium.  Oxygen flowing into the bubble from the water slows the loss of nitrogen, but there is so much less oxygen available in water compared to air that consumption of oxygen often outstrips the flow of oxygen into the bubble.  So, nitrogen slowly seeps out of the bubble, making the bubble smaller and smaller until the bug must go to the surface to replace the bubble altogether.

Physical gill respiration is a really excellent adaptation for aquatic insects that rely on atmospheric air.  It considerably increases the length of time an insect may remain underwater and decreases the trips to the surface the insect must make.  However, it only works when the bubble is exposed to the water.  Insects that don’t expose their air bubbles don’t gain the benefits of physical gill respiration.   And any insect that carries lots of air with it, regardless of whether it exposes its bubble to take advantage of physical gill respiration or not, has some negative side effects.  One of these is the insect becomes very buoyant and tends to float to the surface any time it isn’t holding on to something or actively swimming.  This requires energy to do.

A water boatman, one of many aquatic insects that use ventilation to improve their respiratory efficiency.

Another downside to physical gill respiration is related to the speed at which oxygen moves through water.  Imagine an insect that carries an air bubble in still water.  As the insect consumes oxygen from the bubble and it is replaced by oxygen from the water, the oxygen close to the bubble is quickly depleted.  Because oxygen moves so slowly through water, this is problematic: if the insect doesn’t move, it will take a very long time for oxygen to move into contact with the bubble once more, likely longer than the insect can stay underwater.  This is where our friend turbulence comes into play again!  Several insects exhibit behaviors that ventilate their respiratory system, that is behaviors that bring freshly oxygenated water into contact with the bubble or other respiratory structures while pushing de-oxygenated water away.  The beetle in the image above is an excellent example of this.  It swims around through the water a lot, exposing its air bubble to the water the whole time.  The water boatman at the left uses his legs to stir the water around his air bubble.  And some insects that use physical gill respiration live in flowing water so oxygenated water is almost always flowing by them.

All this boils down to a simple concept: many aquatic insects exhibit adaptations, either structural or behavioral, that allow them to remain underwater as long as possible.  They actually have some control over how much oxygen they are able to take in while underwater!  Next time, it’s another From the Literature post.  I’ll be going over a recent paper on a structural adaptation in some beetles that allows them to breathe in water.  I think it’s amazing, so I hope you’ll check back soon!