I wrote my last three posts on insect respiration specifically because I wanted to talk about a paper that was published in the Journal of Morphology in November 2009 that deals with aquatic insect respiration.  Since this is my personal area of expertise, I find this paper fascinating!  I hope you find it as interesting as I did.

One of the most common insects you’ll see in many freshwater systems is the predaceous diving beetle (Order: Coleoptera, Family: Dytiscidae).  As the name implies, these are beetles that live in water (hence “diving”) and they are fierce predators (hence “predaceous”).  They’re pretty amazing insects in many different ways and many of them are absolutely gorgeous to boot.  However, today I wanted to focus on one really interesting respiratory structure that a pair of researchers in Germany discovered.

Predacious diving beetles are generally atmospheric breathers and must go to the surface periodically to collect oxygen (see my posts on aquatic insect respiration and breathing more efficiently in water for more information).  They then carry air under their elytra while underwater.  Several species expose part of their air bubble to the water to allow them to take advantage of physical gill respiration as they swim around their environment.  However, some predaceous diving beetles are known to stay underwater a much longer time than would be expected if they relied solely on a physical gill.  Some of these beetles have been observed to have little air bubbles attached to their elytra, prompting some researchers to suggest that they might actually be breathing through their shells.

German researchers Siegfried Kehl and Konrad Dettner of the University of Beyreuth were interested in this observation.  They wondered whether certain species of predaceous diving beetles were able to use their elytra as a respiratory organ and set up a simple study to test the idea.  The team was interested in two things.  First, they wanted to know whether the elytra of the predaceous diving beetle Deronectes aubei were able to take up oxygen, that is whether they contributed to the respiration of these insects.  If so, they wanted to examine the structures on the surface of the elytra to determine which structures were contributing to respiration and how oxygen would be transferred from these structures to the rest of the body. 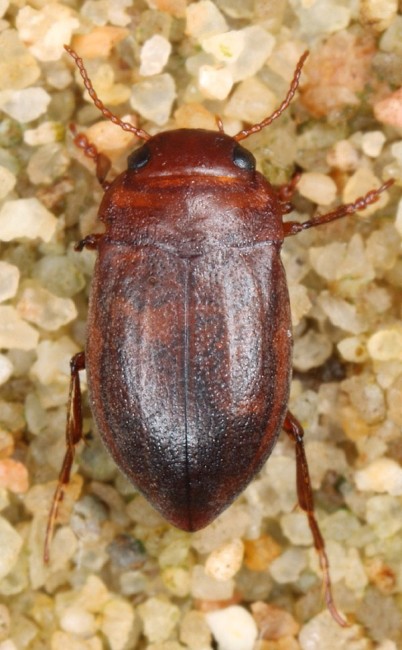 This is one of the smaller predaceous diving beetles and is just over 1/8″ in length.  This particular species is European and found in Germany, so Kehl and Dettner were able to observe them in their lab.  They discovered that this species is capable of remaining submerged without any access to atmospheric oxygen for over six weeks!  Because these beetles live at the bottom of very fast flowing water, anything they can do to increase their submersion time will help prevent their bring washed downstream and/or damage to their bodies.  Being able to breathe through their elytra and absorb more oxygen from the water would be an excellent adaptation for living in this environment.

First Kehl and Dettner determined whether D. aubei was able to take up oxygen via their elytra using a technique called respirometry.  Respirometry is rather complicated to do and there is a ton of math involved, but the concept is simple.  First, you measure the oxygen content of air or water entering a chamber where an organism is housed, in this case a beetle or group of beetles.  Then you measure the oxygen content of the air or water after it has been exposed to the organism for some length of time.  The difference between the two measurements is the amount of oxygen that the organism used.

Both types of respirometry provided the same results: beetles exhibited a significantly larger oxygen uptake when their elytra were exposed to the water than when the elytra were coated with resin and not allowed contact with the water.  These results mean that the beetles are taking up oxygen via the elytra and are using them as a respiratory structure.  The team also found that blocking the physical gill (that air bubble they expose to the water) did not significantly decrease the oxygen consumption of the beetles.  This told them that the beetles are getting most of their air through their elytra and that the air bubble they carry isn’t that important. 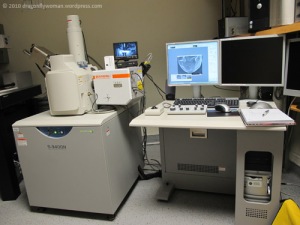 The scanning electron microscope I use for my work. The sample goes into the chamber on the left and the image pops up on the computer screen on the right. The electron gun is the cylindrical part sticking up above the sample chamber.

Kehl and Dettner conclusively showed that the beetles were capable of taking oxygen in via their elytra, so the next step was to determine how exactly the elytra are used as a respiratory organ.  To do this, the team examined the structure of the elytra using electron microscopy.  Electron microscopy, like respirometry,  is rather complicated, but for now just know that there are two different types.  Scanning electron microscopy (SEM) is used to look at the surface features of an object and the samples can be pretty big, as large as the sample chamber will allow.  An electron gun is aimed at the object, they bounce off the sample, and sensors collect them to create an image of the object on a screen.  In contrast, transmission electron microscopy (TEM) is usually used to look at the internal structures of an organism, but you can only look at very small portions of the object of interest at a time.  An electron gun is aimed at a very, very thin slice of the thing to be examined and a sensor below the sample collects the electrons that pass through the sample to create an image on a screen.

Kehl and Dettner used both types of electron microscopy in their study.  First they used SEM to look at the surface structure of the elytra of D. aubei.  They discovered that there are three different types of hairs present on the beetles.  One is a simple hair that is found in deep pits.  Another is a hair that is found in shallow pits.  The third is a spoon-shaped hair with an enlarged base that is also found in pits.  Hairs are used for a lot of different things in insects including sensation (smelling and/or feeling the environment around them) and proprioception (determining which body parts are positioned where), so the team used TEM to see which specific hairs were involved in respiration.  They found that the spoon-shaped hairs contained tracheoles that traveled down cylindrical channels in the elytra.  These tracheoles then connected to one of four big tracheae inside the elytra that carried oxygen to other parts of the insect.  This meant that the spoon-shaped hairs were the respiratory structures of the elytra, the areas where oxygen was being taken into the elytra to be used by the insect.

What all of this means is that these beetles have tiny gills littering their elytra that they use to absorb oxygen from the water!  Kehl and Dettner call them setal tracheal gills.  These gills likely significantly increase the surface area through which the beetles can absorb oxygen, allowing them to remain underwater much longer than they could without them.  Because the beetles live in fast flowing, cold water, they live in an ideal aquatic oxygen environment.  These gills allow the beetles to make the most of the abundant oxygen.  The beetles also live in a high risk environment for moving around, so the longer they can stay underwater the better.  Kehl and Dettner suggest that other beetles that either live in very fast flowing waters or that live far under the substrate in streams likely have similar structures as well.  It is common for organisms that live in similar habitats to exhibit similar structural and/or behavioral features that suit the environment, even if they are widely disparate species.  The team predicts that many beetles living under gravel in fast flowing streams might have the same respiratory structures as D. aubei.

I believe that this study is a particularly good one.  Aside from my personal interest in the subject, Kehl and Dettner simply did a great job in creating an elegant study.  First they determined conclusively that the beetles were able to use their elytra to take up oxygen by comparing the oxygen consumption of beetles that were allowed to use their elytral structures to the same beetles when they could not use their elytra for respiration.  Then they used SEM to identify potential respiratory structurs on the elytra.  Finally, they used TEM to determine how the structures on the surface were connected with the internal respiratory system of the beetles, identifying the specific structures involved in respiration and the pathway oxygen takes to get into the beetle’s respiratory tract.  They showed both that the beetles were using their elytra as a respiratory structure and how they were able to do so.  Then they finished off their paper by suggesting the conditions in which this sort of respiration might be particularly well suited and made predictions that could extend to several other species.  It’s an example of a very neat, tidy experiment that uses simple experiments to discover new things with broad implications, which is what ever researcher hopes to achieve with his or her writing.

This concludes my series on insect respiration and aquatic respiration in insects!  If you have any questions or would like more information, please feel free to leave a comment.  Until next time!

9 thoughts on “From the Literature: Beetles that breathe through their shells!”