I get a lot of questions about insects when people learn that I’m an entomologist.  These frequently sound something like, “I saw this little brown beetle in my house the other day – what is it?”  Most of the time, I have a hard time identifying an insect based on a description like this.  You often need to see an insect to properly identify it.  At the very least you need a photo.  There are, after all, close to a million known species of insects and there may be over 10,000,000 insect species in all!  One person can’t possibly know all of the species of insects, no matter how great their memory is.  However, there are some things that I can identify based entirely on a quick and dirty description.  One of the easiest is the difference between a damselfly and an antlion.  They look very similar so I completely understand why people have a hard time telling them apart, but there are some obvious distinctions if you know what to look for.

First, let’s take a look at a damselfly:

This is a member of the family Coenagrionidae, so it is one of the very common little blue damselflies you’ll see around ponds.  What do you notice about the structure of this insect?  Look closely at the wings.  Click on the image to enlarge it if you need to.  How many wing veins and cells in the wings do you see?  The wing veins are the lines on the wings while the cells are the little open square parts between the wing veins.  The color on damselflies is often distinctive.  They fade badly once they are dead, but this damselfly used to be a brilliant blue.  Now look at the head.  Do you see any antennae?  Probably not.  They’re visible (there’s one sticking off the right side of the head right above the right eye, looks like a little hair or a piece of dust), but they’re small, bristly things that most people wouldn’t even notice.  They’re definitely shorter than the length of the head.

Now look at the antlion: 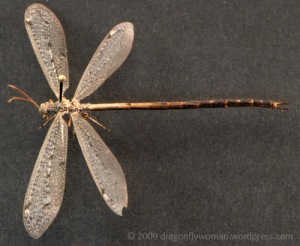 Can you see why people get these two insects mixed up?  Even some beginning entomologists have a hard time telling the two of these apart!  Look closely at this insect like you did with the damselfly.  First, you should note the color.  This insect is brown, as are almost all antlions.  While some damseflies are brown (especially females), there are many that are brightly colored.  If you have a brightly colored individual with this shape, it’s a damselfly, not an antlion.  Next, look at the wings and observe how many cells there are.  How many do you see?  Antlions belong to the order Neuroptera, the net-winged insects.  Antlions, like other neuropterans, have tiny cells in their wings and a whole lot of them, many more than you’d ever see in a damselfly.  If you see an insect with this shape with tons of little cells instead of 100 or so large, open cells, you’re looking at an antlion.  But the easiest way to tell them apart is by looking at the head.  What do the antennae look like on this insect?  They’re very long, much longer than then length of the head, and thick.  In other words, they’re quite conspicuous, very unlike the tiny, bristly antennae you can barely see in the damselflies.  If you see an insect with this shape that has long, luxurious antennae, it’s antlion.  If it has antennae that are barely visible, it’s a damselfly.  Easy, right?

Of course, there’s one other obvious distinction.  Damseflies are diurnal, which means that they are active during the day.  Antlions are nocturnal, so they are active at night.  You might occasionally find an antlion out during the day, but it’s very unlikely to see a damselfly at night.  Most of the time it’s easy to tell these two insects apart based solely on when you see them!  But, it’s always good to check the length of the antennae and the number of wing veins to be sure.

Now that you know the difference between an antlion and a damselfly, you might start noticing how often these two insects are mixed up.  There is a tank top that I would dearly love to have that depicts an antlion.  The people selling it have it labeled as a dragonfly (not even a damselfly!).  Rubber stamps, especially ones based on old engravings from the 1800’s or early 1900’s, often erroneously depict antlions when they’re supposed to be damselflies.  And all sorts of people feel the need to put antennae on dragonfly and damselfly images.  I don’t know why this is so common, but you will see dragonflies and damselflies with long curly antennae everywhere you look.  This is actually my single biggest pet peeve as an entomologist.  I couldn’t care less about using the word bug when you should use insect, but stick antennae on my favorite insects and you and I are going to have words!

Next time I’ll likely post about how to tell damselfly nymphs apart from stone fly and mayfly nymphs.  They’re easy too, so I hope you’ll check in again soon!

10 thoughts on “Damselflies and Antlions – What’s the Difference?”