Evidence for Overland Dispersal in a Flightless Aquatic Insect

Hello again from the NABS/ASLO 2010 meeting!  Today I’m focusing on Day 2 of the conference and my favorite talk of the day.  But first, two things I learned:

— Some aquatic insects are capable of moving a very long distance to get to new or better habitats.
— The person who designed the layout of the Tuesday poster session should be tarred and feathered for coming up with the absolute worst possible layout.  While I feel like my poster went over fairly well (I even had 2 judges tell me that it was very well done , giving me some miniscule glimmer of hope that I might win one of the tiny number of awards at NABS this year), it was a physically miserable experience.  The posters were arranged like this: 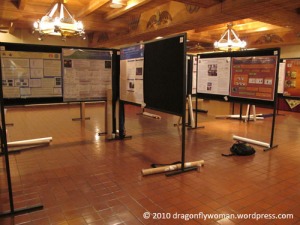 The space was about 8 feet long and about 8 feet wide and each of these little alcoves held 6 posters each.  You could comfortably fit maybe 5 people in this space.  And THIS is what it looked like with 8 people: 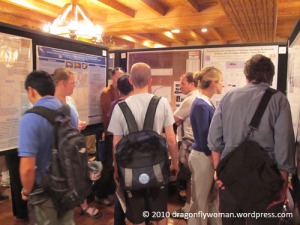 The alcove in which my poster was located during the poster session.

I was forced to stand out in the aisle because I didn’t fit.  Wow that’s bad design!  Still, my scientific experience during the session was great once I got past the bad lighting, the inability of the AC unit to keep up (it was probably 85 or 90 degrees in the room – hotter than outside!), and the cramped quarters.  I got a lot of good feedback.  Considering this poster was the entire reason I came to the meeting, this is a good thing.

But back to my favorite talk of the day.  The title of my Day 2 favorite talk is at the top of the page and is probably easier to understand than yesterday’s if you’re not a scientist.  The talk was given by Kate Boersma, a Ph.D. student in Dr. Dave Lytle’s lab at Oregon State University.  The Lytle lab does some excellent research and Dave has been a star in the aquatics world since he was granted his professorship at OSU, so it’s no surprise that I liked Kate’s talk the best of the ones I heard today.  Plus, she’s a colleague of mine, a fellow giant water bug researcher, so you can’t go wrong.  She works on one of the same water bugs I study, the lovely Abedus herberti:

Kate’s talk was about dispersal of this insect, or the movement from one habitat to another.  But before I get into the presentation, let me say a bit about dispersal in aquatic insects, especially as it pertains to insects in the arid (=dry) southwest.

Aquatic insects living in streams don’t really stay in one place.  They move around a lot, but there is a tendency for them to move downstream.  After all, simply losing your grip on whatever you’re holding onto in the water is enough to sweep you off into the current and far away from your home.  Invertebrates moving downstream by passive means (being swept along by the current), either intentionally or accidentally,  is called invertebrate drift.  Generally, moving downstream is something you want to avoid if you’re an aquatic insect.  Fish eat the insects and other organisms that make up the drift, so there is a high risk of predation for drifting insects.  Streams can also change a lot over their length, so it’s to an aquatic insect’s benefit to stay in the place that is best suited for it.  Insects CAN move upstream though.  They will crawl, or in some cases swim, upstream through the water.  Alternatively, many species with terrestrial adults are known to fly upstream to lay their eggs, thus ensuring that the population at the uppermost portions of a stream (the headwaters) remain stable.  Any movement of an organism from one area to another is called dispersal.

If an area becomes unsuitable for any reason, the insects need to move to another area if they are to survive.  This means dispersing.  This happens frequently in the arid southwest, but how insects move between habitats, the cues they use to signal that a move is necessary, and whether dispersal is limited strictly to up and downstream movements are still poorly understood.  Kate hopes to explain how Abedus herberti chooses to move to a new habitat, how far they can move, and in what direction.  And this brings us to the subject of her talk.

First she described the conditions in the area in which I also do my research.  We have a lot of streams, but many of them are dry most of the year (these are called ephemeral streams because they water only flows for a short time).  Even streams that flow most of the year can mostly dry out during the summer, leaving behind isolated pools of water into which the entire invertebrate population of the stream must go.  As these pools get smaller and smaller, it becomes stressful for the organisms living in them.  Abedus herberti is also flightless, so if the pool dris completely and they can’t find a new source of water, they die.  If they are able to instead move to another habitat nearby by crawling across the land, they might be able to avoid death and prevent the local extinction of populations within the area.  There is some genetic evidence that suggests this is possible, but Kate is the first person to really look into it.

Kate has been interested in which environmental conditions, which cues, prompt A. herberti to move from one habitat in search of a better one.  In her talk, she described a study she did recently.  She expected that pool drying would prompt a water bug to move from one habitat to another, so she set up an experiment.  She set up several opaque tubs filled with water that held smaller tubs inside them.  These inner tubs were assigned one of two treatments: either they were left dry or they were filled with water.  She then placed bugs inside the inner tubs, left them for a period of time (honestly, I didn’t get the time frame down, but it was something on the order of overnight or a week), and then compared the number of bugs that she found in the water-filled outer tubs in each treatment.  She discovered that more bugs moved from a dry tub to the wet outer tub than from a wet tub to the wet outer tub.  This suggests that the insects use pool drying as an excuse to leave the poor quality habitat in search of a better environment.

Kate also presented data on the distance that these bugs are able to move overland, though she did not collect the data herself.  Her labmates collected water bugs from several different pools, marked them, released them back into the pools, and then came back much later and recorded the location of the marked bugs they found.  They discovered that A. herberti prefers to stay in the same area, if not the same pool, in which they were found originally.  However, some had moved.  Of these, the females were found to have moved about 20 meters (just under 65 feet) while the males moved only 12 meters (about 39 feet).  The bugs clearly don’t move very far if they don’t have to.

However, Kate also showed a video that she happened to get through pure serendipity: a rather crispy looking male giant water bug who had left his aquatic habitat, had climbed into a dry streambed, and was hurrying downstream.  This was visual evidence that the bugs are able to move over land if conditions warrant the behavior.  She was also able to calculate a land speed for the bugs of about 4.6 meters (15 feet) per minute.  This is pretty fast for a one inch long animal!  She further calculated the maximum distance the bugs might be able to travel based on some data I had given her regarding they length of time the bugs can remain out of water.  Her calculations suggest that these bugs might be able to move as much as 6624 meters (4.12 miles) before they dry out and die!

So, Kate showed that overland dispersal can occur in Abedus herberti, that they use pool drying as a cue to disperse, and that while the bugs prefer to stay in one place, they occasionally travel across land for some distance in search of a better home.  Pretty neat, eh?  I thought so.  :)

Tune in tomorrow for another edition of Notes from NABS!