The Biosphere 2 Science and Society Fellows lunch was held in May, so my time as a B2 fellow is officially over and a new cohort will begin in the fall.  The fellowship was a great experience in general, though I am particularly pleased with my blogging experience.  Thanks to everyone who’s been keeping up with my blog for the support and encouragement!  I’m going to keep blogging and hope to make this a permanent part of my scientific life.

I had a chance to check on the pond I built to attract aquatic insects at B2 during the tour of fellows’ projects we made before the lunch.  As promised, this post will be a report on the success of my pond a month after the installation.  It’s terribly overdue as I’m easily distracted by interesting things and kept putting it off, but it’s time to get to it!  If you missed the earlier posts and want to read about the planning and installation of the pond, there are links to all of the pond posts at the bottom of the page.

First, a photo of the condition of the pond the last time I saw it, in mid-May: 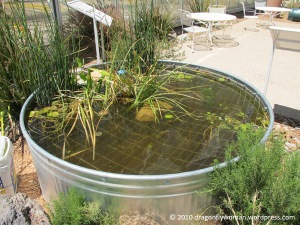 My pond, a month after installation.

Admittedly, there were a few problems with the pond.  The water ended up becoming murkier than I’d hoped.  It may eventually require the installation of a filter to clear the water up because it was hard to see to the bottom of the pond.  It could have been worse though and a month in the hot sun of southern Arizona is enough to cause some major algae problems that my pond didn’t appear to be having.  So, the pond water was pretty good, but could have been better.

The main problem the pond was having was the wind.  During the installation of the pond, the Biosphere 2 courtyard where it is located was quite lovely.  Three weeks later when I went to check on it and again at the fellows lunch, the wind was absolutely ripping through the courtyard.  That courtyard gets a lot of very strong winds apparently.  I’m not sure that the cattails I planted myself had been in the pond long enough to establish a strong root system and the majority of them had been ripped out and were lying across the top of the pond.  I can’t do anything to keep the wind down in the area, but I did replant the cattails that still looked healthy and supported their bases with a lot of rocks.  I’ll have to go back to check on it one more time to see if it worked or whether they fell over again.

The wind was also causing problems for my identification guides.  They were getting whipped around on their hangers and were spread across the courtyard both times I went to check up on the pond.  The ring was entirely missing from one of the guides as well.  I’m going to need to figure out a way to shelter the guides from the wind so that they’re not being strewn all over the area and they’re in a place visitors can actually find them.  Stupid wind!  It’s amazing how much wind that courtyard gets. 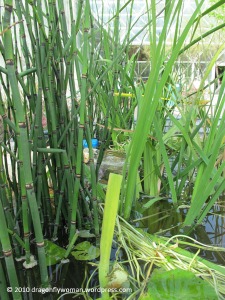 Plants in the pond.

In spite of these rather minor hiccups, here were several things that made me very happy about the pond too.  First, most of the plants seemed to be doing pretty well.  The submerged plants were still looking good and the horsetails, irises, and reeds remained green and were standing upright in the pond.  This suggests that they rooted sufficiently to withstand the wind.  The floating plants weren’t quite as abundant as they were originally and some had clearly died, but there were several still living in the pond and those all looked bright and healthy.  Overall, the plant situation looked promising.  I’ll want to go back after the winter and see how many plants avoided freezing during the winter, but I think the plants will make it until the first freeze at least.

There were insects in the pond!  There weren’t as many species as I had hoped (the seclusion of the courtyard and/or the wind may have had something to do with it), but there were some beetles and some fly larvae in the pond.  Considering the goal was to attract insects to the pond, this was what I had hoped to see.  I expect the pond likely has more insects in it now as the warm weather prompts many aquatic insects to disperse to new habitats and the monsoons are coming up soon too.  Lots of insects move around once the monsoon rains begin.

Much to my great happiness, there was one insect type missing entirely from the pond: mosquitoes!  There had been many at my house by the time I checked on the pond, so I was very worried that there would be tons of them breeding in the water.  I looked really hard and I didn’t see a single one!  The flow of the water appears to be sufficient to control the mosquitoes, though I’ll definitely want to go check up on that again this summer just to be sure.  Mosquitoes are definitely something I want to avoid.

And finally, the water levels and the flow were both looking good.  The automatic filling system seemed to be doing its job well and the water was still flowing at a good clip.  Hopefully these will continue to work well long into the future.

Overall, I think the pond was looking pretty good the last time I visited it.  I want to go back sometime after the monsoon rains start to check on it again, but the conditions of the pond a month after installation were promising.  The goal of the project was ultimately to create a permanent educational display and so far the pond seems to be holding its own and going strong.  Yay!  My first successful pond!  Now I’m itching to build one in my yard…  :)

Posts in this series: