I’ve been hard at work writing papers based on my research recently, so I’ve been writing science galore!  Unfortunately, this means that I’m in scientific writing mode and I’m finding it hard to write a decent post for the blog.  I’ve started about 6 different posts, but none of them are turning out the way I want them to.  I’ll finish all of those other posts sometime, but I’m giving up for now and doing something non-scientific.  Today’s topic: how to tell if your child is likely to become an entomologist.  And I have embarrassing illustrations!  Behold this photo!: 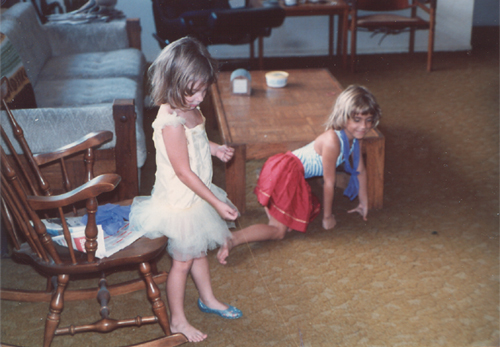 Shortly after I began grad school, this photo arrived in a package from my mom.  This pretty much sums up my childhood in Arizona, before my family moved to Colorado.  That’s me on the right in the smashing Little Red Riding Hood costume skirt/blue and white striped swimsuit/purple scarf ensemble and my sister is on the left rocking the tutu/single jellie look.  (For those of you that know me in person, yes my hair really was both straight and blonde as a kid!)  My sister and I wore these outfits often and generally looked pretty homeless.  Sadly, I still often look pretty homeless when I’m out doing field work.  While many field scientists I know buy $80 tech pants at REI, I am not about to spend that kind of money on something that will likely a) be ripped, b) become hopelessly stained, c) get acid burns, or d) all of the above within my first 3 excursions.  I buy my field clothes at Target and Goodwill thank you very much.  When I rip the whole butt out of my pants in some magnificently clumsy maneuver, I’m out maybe 10 bucks and don’t want to cry.  However, this also means I wear these horribly stained ratty clothes out in the field.  In other words, I haven’t changed my style much since I was kid.  My sister has thankfully upgraded her wardrobe and DOES buy those $80 tech pants (usually on sale), but she is a park ranger and not an entomologist.  I’m a bit harder on clothes than she is.  Park rangers also actually talk to people on a regular basis while we entomologists are prone to being somewhat reclusive.  I mean, who DOESN’T want to talk to someone who looks like a homeless person running through the park with a bug net over her head yelling, “AAAAAAAAAAHHHHHHHHH!” as she goes?  :)  You can tell from my wardrobe as a kid that I was meant to be a bug person.

I now draw your attention to that spot on the carpet I’m staring at in the photo.  And if you look really closely, maybe move your head around to change the angle, you can see that my sister is holding a string in her hands.  While the clothes are suggestive of future bug geekdom, the items at the end of the strings are an even better indication that I was doomed to study bugs for a living.  That spot on the carpet and the thing at the end of the string my sister is holding is this:

This is an appallingly bad photo of an otherwise gorgeous beetle (I recommend you check out Alex Wild’s far superior photo of this beetle) called Cotinus mutabilis, or the fig beetle.  If you grew up in Arizona like I did, you might also call this a June bug even though it isn’t a bug.  (If you’re interested in what makes a bug a bug, please check out my post on the subject for details.)  Fig beetles are about an inch long and sport a velvety matte green on top and metallic green on the bottom – they’re amazingly beautiful beetles.  They’re also very gentle beetles that fly around southern Arizona during the summer.

So what, you might be asking yourself, are my sister and I doing with them in the photo?  We’re flying them of course!  My dad would catch the beetles for us, tie threads onto one of their hind legs, and give us the other end of the threads to hold onto.  When the beetles tried to fly away, they would get to the end of the tethers and start flying in circles around our heads.  We’d fly our beetles for about a half hour, then we’d untie the threads and let them go.  It’s one of my favorite childhood memories and we did this a lot.  In the photo, both of our beetles were wandering around on the carpet rather than flying.  You can tell that I am the one who ended up becoming an entomologist rather than a park ranger because I’m the one on the floor with my beetle.  Park ranger little sis is keeping a respectable distance between her beetle and herself.

I really love this photo.  My sister and I both look absolutely terrible (and my mom wrote this lovely sarcastic note on the back after it was developed: “Playing with June bugs on strings – in particularly attractive outfits – the way they usually look!”), but it’s a reminder of an activity I dearly loved as a kid.  And once you decide to take the plunge and turn that bug obsession into a career, your family starts to send you all of these photos full of clues that you were destined to become a bug geek from the start.  I have a feeling most entomologists have photos like this.  Display them proudly, fellow entomologists!  I know I do.