Welcome to another Friday 5!  I hope to get another dragonfly swarm data post out tomorrow or Saturday, but for now enjoy a short post about an insect that most people know nothing about: webspinners! 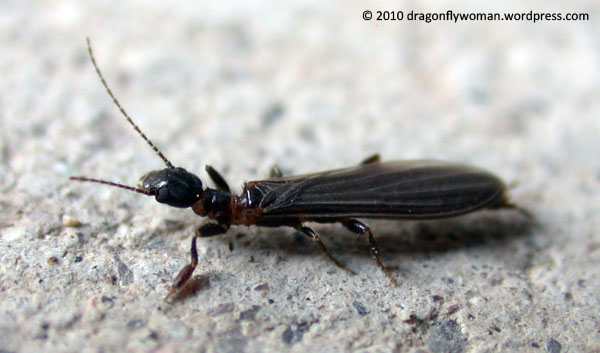 Okay, okay.  These insects aren’t that mighty.  In fact, they’re pretty soft, flexible little beasts and have a delicate structure.  Their wings are very easily damaged (more about why in a moment).  Basically, these are the 95 pound weaklings of the insect world!  But, these insect are still super interesting on many different levels and they deserve your love and respect in spite of their overall wimp factor.  Here’s why:

5. Webspinners belong to their own insect order, the Embiidina (sometimes called Embioptera).  As far as insect orders go, it’s pretty small, less than 400 species worldwide.  If you consider that one single family of beetles, the weevils, has over 40,000 described species, it really puts that number into perspective!  Most people will go through their lives without ever knowing that they exist too.

4. Webspinners aren’t very common in the US, so lots of entomologists get excited when they collect them in Arizona.  However, the most commonly collected Arizona species, Oligotoma nigra, isn’t native to the US!  It is an introduced species normally found in India and accidentally brought to the US, perhaps as early as the mid-1800’s.

3.  Webspinners are among the few insects that exhibit parental care outside of the ants, bees, wasps, and termites.  Females build nests and raise their young in them.  I’ve already written about webspinner parental care, so for more information please see my post on parental care in insects.

2.  Webspinners are sexually dimorphic.  The males have wings while the females are wingless.  (A more complete discussion of dimorphisms can be found on my post on color polymorphisms in dragonflies.)  The wings of the males are really cool too!  They are completely soft and flexible and utterly lack the rigidity of most insect wings because the wing veins are very soft.  They can fold, bend, curve, and otherwise move their wings in ways that are impossible in most other insects.  They have these soft wings for a reason: to allow them to maneuver easily in the nests of potential mates.  Webspinner nests are filled with narrow tunnels, spaces that would be difficult to navigate with stiff wings.  Most insects would become trapped within the tunnels when their wings became tangled, but the soft wings of webspinners allow them to move easily about the tight spaces.  On the other hand, such wings are completely useless in flight because they are too soft.  Never fear!  Webspinners have also evolved a means of making their wings stiff when they need to fly.  There’s a special pouch called the radial sinus along the front edge of the wings that they can fill with hemolymph.  When filled, the pouch acts like a wing vein, stiffening the wing enough for the webspinner to fly.  When he finds a nest, the male can deflate the wing pouch and make his wings floppy again before he enters the nest.  Pretty cool, eh?

1.  But the best thing about the webspinners is their web spinning abilities!  The nests they make are created from silk that is excreted from a special structure in their forelegs.  One part of the foreleg is enlarged (see it depicted here) and packed full of silk glands.  They then move their feet around, extruding silk, to create silken tubes in which to raise their young.  Now I could explain how they do this, but Sir David Attenborough is so much better at explaining these things than anyone else.  Enjoy this clip from his superb Life in the Undergrowth:

Webspinners!  They look like wimps but they have a sort of elegant charisma that few other insects possess.  And, they’re darner cute to boot!  They’re always going to be one of my favorite insects.

Next week’s Friday 5 will be a surprise!  Until next time!