Whew!  Last week ended up being really busy!  But it’s time now for another summary of the dragonfly swarm data I collected this summer on my blog.  Today’s topic: distribution of dragonfly swarms and the maps!

If you read my first summary post, you know that I learned that dragonfly swarms were very widespread across the US this year.  It actually became a sort of game for me to collect reports from all the lower 48 states as the summer went on.  I was thrilled that I got reports from nearly every state.  WAY too thrilled actually.  And, it irked me to no end that I didn’t get any reports from Louisiana.  I should have.  There were swarms in every neighboring state.  There have been dragonflies recorded flying across the Gulf of Mexico.  There should have been at least one report from LA!  Alas, the summer ended with my dream of collecting the 48 states unfulfilled.  Maybe next summer…

Part of the excitement of this project for me this summer was mapping out all of the reports I collected on Google Earth.  When I inputted the swarms on the map, it was easy to see when and where massive swarm activity was occurring.  It was also easy to see the patterns in the distribution of the swarms.  And, I learned that, though a lot of the work on migratory dragonflies has been done on the east coast, the total dragonfly swarms in the midwest vastly outnumbered the eastern swarms, nearly 20 to 1!

The best way to illustrate the distribution of the swarms is to show you my maps.  Now I could put up a ton of maps and have you scroll down through the longest blog post of all time, but I think video captures the activity much better.  As you watch the video below, you’ll see a series of maps, one for each week starting with the week of 7/4/2010 and ending in mid-October.   A few things to keep in mind as you watch:

On to the video!

I think these maps are fascinating and I’ve thought of a hundred different ways I can display the information they contain.  I’ll discuss what I think this all means in the third and final post in this series, but I think you can take away a few ideas from simply looking at the maps.

First, the swarming activity in the Great Lakes region was intense this summer!  I have a few hypotheses for why this might be that I’ll share next time, but it’s obvious that there was some major swarming happening in the north central US this year.  However, if you look at the colors of the pushpins, you’ll notice that the vast majority of the swarms in the midwest were static feeding swarms.  Some migratory swarms were reported in the midwest (most notably in Nebraska), but most of them were reported along coastal areas.

And speaking of coastal areas, there were reports of dragonfly swarms on both coasts!  Western areas do see both migratory and static feeding swarms.  But, take a look at the video again if you missed it: the dragonfly swarms reported in the western US were much fewer than in the eastern half of the country.  In fact, in most western states, I only received a single dragonfly swarm report.  Some of these were bizarre reports too.  The report from Colorado described thousands of dragonflies sleeping on a ranch until disturbed when the rancher returned in his truck at 10PM.  The dragonflies burst into frantic activity in the dark in what sounded a lot like the climax of Hitchcock’s The Birds.  So, swarms might occur in many different regions and I may have gotten to check off nearly every state on my US map, but it does look like swarms are more common in the midwest and east than they are in the west.

I feel obligated to caution readers about reading too much into these data though.  Consider the person who sends in a report.  This is a person who happened to see a swarm in his or her area, then felt interested enough in the event to look it up online, then spend a few to several minutes making a report.  However, my blog had hundreds of hits a day from people looking for information about dragonfly swarms while I maxed out at about 30 daily swarm reports.  This means that for every person who saw a swarm and was interested enough to look up more information about it (and I think most of these people had seen a swarm or they wouldn’t have thought to seek more info in the first place), there were about 20 others who didn’t submit reports.  The data is somewhat subjective because it is depends on the individual’s level of interest in the behavior and that’s going to vary a lot from person to person.  We don’t all love this subject as much as I do!

The data is also somewhat subjective based on some simple demographics of the states.  The state of Wyoming has a total state population less than that of the city I live in (about 544,000 people)!  It’s also the 10th biggest state in the country.  The lack of people and the space between them in Wyoming means that there is a huge potential for swarms to occur without human witnesses.  Swarming almost surely occurs in WY, but I didn’t receive any reports.  I think this may have occurred in many areas of the western US.  Note that there are several pins in my area in southern Arizona.  There are likely lots of reports in my area simply because I live here!  People in my entomology department tell me about how they saw this interesting dragonfly behavior and wonder if I know anything about it.  When I hear anything about dragonflies that suggests “swarm” to me, I question that person.  My friends are on the lookout for swarms – and they find them – because it’s something I’m deeply interested in!  Hence, lots of pushpins in my area, in spite of its western location.  As a result, I think western swarms may be much more widespread than the maps lead me to believe.  If we can find this many swarms in the Sonoran Desert, there are likely many more swarms in areas with more water.

Because I think it’s interesting, I want to finish this post up with an image of my final dragonfly swarm map and this year’s monarch migration map: 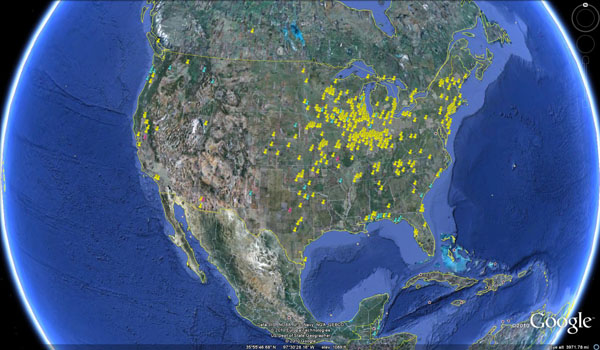 I’m not going to say too much about this because I don’t know what it means, but I would like to point out a few things:

The similarities between the two data sets surprised me, so I am putting them out there for you to make your own tentative conclusions.  I intend to continue collecting data on dragonfly swarms on my blog for several more years and think pursuing the links between the dragonfly and monarch activity could be prove very interesting.

In spite of my cautions, I still think the swarming activity in the midwest this summer was something special.  I also think that swarming is much less common in the west than in the midwest and east.  Next time, I’ll share why I think these things and make some tentative conclusions based on the data I collected.  Check back soon for the final installment!