This year, one of my good friends and I decided that we were going to avoid all of the Black Friday nonsense in our city by going on an insect collecting trip.  We were originally planning to go to Sycamore Canyon, an area we’ve both been to many times near Arizona’s border with Mexico.  However, my friend is a fish scientist (ichthyologist for those of you don’t know) and happens to have access to a protected stream where I’ve never been able to collect.  She was granted permission for us to collect from the stream in exchange for our sharing our findings with the land managers.  So, we packed up my tiny SUV bright and early on Black Friday and drove 3 hours to the eastern end of Arivaipa Creek.

Arivaipa is this wonderfully magical place that people have told me about since I arrived in Arizona.  I’m always told stories about it in hushed tones like the place is sacred.  Naturally, I’ve been dying to go.  And Arivaipa really is a special place.  For one, it has flowing water year round, uncommon for small streams in southern Arizona these days.  For another, the creek is relatively clean with minimal runoff from roads and no sewage effluent.  There may be some contamination by heavy metals from nearby mines, but the creek is largely unimpaired.  It is also home to several native fish species, an increasingly rare quality in Arizona.  Because is a sort of last-of-it’s-kind type of place, access to the canyon and the creek is restricted by the Bureau of Land Management.  You can only hike in the Canyon with a permit and you have to cross Nature Conservancy land to get there, so you have to have double permission to enter.  Only 50 people are allowed in the Canyon each day, so getting to go there is a real treat.  And getting permission to collect aquatic insects from a relatively pristine Sonoran Desert stream there is even better! 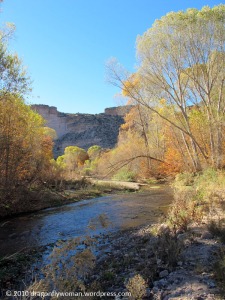 Arivaipa Creek looking toward the canyon

We couldn’t have asked for a better day!  It was supposed to be very cold in Tucson (it was supposed to get down to 26 degrees that night, which is positively frigid by Tucson standards), so we were a little worried it was going to be uncomfortably cool and we prepared for the worst.  We lucked out and stepped out of the car to a bright, perfectly warm, gorgeous day!  We both strapped on some impeccably clean waders and hauled a bunch of gear to the stream.  we were pleasantly surprised the water wasn’t as cold as we’d expected.  (Granted, I was still happy I was wearing my wool socks under my waders!)  We each strapped on some gear, grabbed our strainers (best aquatic insect  nets ever!), and waded into the stream.

We spent the next 4 hours wandering around in the stream hunched over, peering into the water and dipping our strainers into the creek in an attempt to collect as many different insects as we could.  We were surveying the stream for the land managers after all!  Due to the perfectly warm weather, there were clouds of adult mayflies swarming over the stream and I managed to catch a few of them with my strainer.  We pulled several things out of the water that I’d expected to find in in Arivaipa Creek, things I knew other people had collected there.  We didn’t get any specimens of other things that I was surprised were absent.  My friend and I both had to be back in the early evening, so we couldn’t hike too far downstream.  Thus, we missed out on some of the insects that are typically only found in Arivaipa Canyon, a 10 mile stretch of stream flowing between high, steep rock cliffs, or further downstream.  That’s where all the hellgrammites are.  Sadly we didn’t find a single specimen in the section of the stream where we were collecting.  We did collect some exciting things though!  We were feeling quite pleased with our day by the time we headed back home.  Great day!

(AND, we stopped to the The Thing on the way home.  I’ve been driving past this roadside attraction in Arizona nearly my entire life and I’ve never seen it.  Since we had some time to kill, we stopped, paid our $1, and saw The Thing.  I’ve known what it is since I was a kid, but it was high time I actually visited!)

Vials of insects collected from Arivaipa.

The following week, we sorted through all of our bugs, removed them from the debris (we “picked” them), separated the insects into groups according to genus, and identified them to the genus level.  In all, I collected 23 genera, including water bugs, water scorpions, several caddisflies, lots of beetles (including crawling water beetles – family Haliplidae – my favorite aquatic beetles), and some damselflies.  The most exciting find of the day for me was collecting two different genera of dixid flies in one stream, something I’ve never experienced before.  My friend also caught a beetle I’ve never caught on any of my many Arizona collecting trips, a marsh beetle (family Scirtidae).  Overall I think we collected about 30 different insect species.  That’s pretty good considering we only sampled a very tiny section of the stream during late fall/early winter!

My collecting trip to Arivaipa made me really happy.  Rather than sitting around at home avoiding shopping, I got outside, visited a beautiful place that I’d never been, collected a bunch of great insects, and spent most of a day talking to a good friend.  We got some really great bugs, saw The Thing.  I got to drive through the creek several times where it crossed the road.  (I have a secret dream to be a stunt driver for truck commercials, so I LOVE driving through rivers!)  Much better than spending the day hiding in the house!  Now, where to go next year…

6 thoughts on “Collecting in Arivaipa”