My post Arizona’s Amazing Beetles proved to be quite popular.  Today I’m going to do a similar post, but this time I’ll focus on some of the aquatic beetles in my state.  Arizona has some pretty impressive aquatic insects and the beetles are no exception!  A lot of Arizona’s aquatic beetles are found in other states, but they are things I associate with my home and are therefore going on my list today.  These are 5 of my favorites:

I adore whirligig beetles!  If you’ve never had an opportunity to see these beetles in action, you’re really missing out.  I recommend you go to your nearest stream, find a calm pooled area, and look for them ASAP!  Whirligigs zig and zag and spin and otherwise move frenetically across the surface of the water.  They’re also gregarious, so you usually find a whole bunch of these beetles in one place, whirling and spinning in big groups.  The behaviors are interesting, but the structure of these beetles is just as great.  The hind two pairs of legs are very short and broad and act like little oars to propel the beetle across the surface of the water or underwater when they dive.  Also, these beetles have 4 eyes, one pair looking up into the air and one pair looking down into the water!  I like this species of whirligig best partly because it’s big (close to 3/4 inch!), but also for the gorgeous iridescent green and bronze colors that you can see when the light’s right. 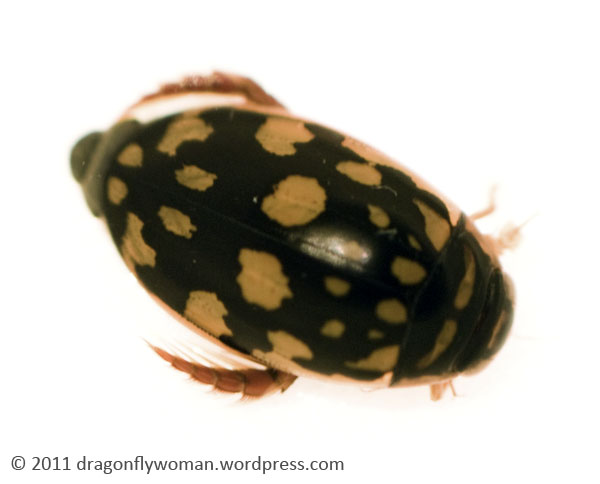 I talked about these beetles in my first Arizona beetle post, but they’re just so pretty I can’t help myself.  I could watch these beetles swim for hours.  They’re quite possibly the most graceful swimmers of any animal I’ve ever seen.  That is, until they find prey, hunt it down, and rip it to shreds with their powerful mouthparts!

I don’t know what it is exactly that makes me love these beetles so much.  They’re fairly small (1/4 inch long or less) black beetles.  They have about the coolest antennae of any insect, though they keep them tucked down into a groove in their heads so they’re hard to see.  They’re heads are normally partly embedded in their thoraxes (picture the head in the photo retracted to the back of the eyes), which gives them this funky stubby look.  The larvae of aquatic dryopid species are terrestrial, which is completely backwards for aquatic insects.  These are really cool little beetles!  I get a little giddy every time I find them.  Plus, they are a clean, flowing water species so you can find these beetles in some of the most beautiful areas of Arizona.  Look for them in riffle areas in streams.

These beetles have been right up at the top of my list of favorite insects from the moment I caught my first.  Honestly, I like them because they are funky looking little beetles.  They’re tiny, less than 1/8th inch (hence the less than perfect photo – my 105mm macro lens isn’t quite up to the task of photographing haliplids!).  They’ve got big, broad shoulders and heart-shaped elytra, but then they have these itty bitty little heads sticking off the front.  They’re miserable swimmers, so they prefer to walk and get their common name from this habit.  And if you flip them upside down, you’ll see a really cool structure.  The first segment of the hind legs, called the coxa, is enormous on these beetles!  They expand into big plates that cover nearly the entire underside of the abdomen
(check out this photo to see it).  The scrawny little hind legs then peek out from under these giant plates so that you can’t see the first few leg joints.  As I said, funky looking beetles!  Like the long toed water beetles, I find these beetles in clean, flowing water in many parts of Arizona.

These beetles are awe-inspiring.  They’re huge, over an inch long.  They’re sleek, beautiful black with just a hint of green under the right conditions.  In Arizona you find them in murky ponds, so you’ll see these large black things emerge into the light for a moment as they get air before they disappear back into the water.  They have a massive spike used for defense that runs down the center of the thorax and ends midway down the abdomen in a vicious looking point.  Their larvae are gigantic, close to 3 inches long.  They move into the muck along the shoreline when they near pupation and emerge occasionally as mud-covered monsters with massive jaws.  And for all this impressiveness, they’re herbivores as adults, contenting themselves with eating plants in vegetation-filled ponds.  Love ’em!