I work with giant water bugs in my research, but the main focus of my work is actually their eggs.  All the behaviors I observe and the physiology I measure are related to the egg stage of their development.  Today I thought I’d give a crash course in insect egg anatomy using my giant water bugs as models.

But first, a quick disclaimer!  Giant water bugs have strange eggs.  The insect developing inside the eggs require parental care and cannot survive without it in the wild (you can get them to hatch without the parents under certain laboratory conditions) and the exact locations of the structures on the eggs you’ll see here are different from many other insect species.  Still, giant water bugs have the same structures as other insect eggs and those structures do the same things for the insect developing inside the egg as they do in other species.  Just remember that parental care of eggs is rather rare in insects, and the paternal parental care of the giant water bugs barely exists outside their group. 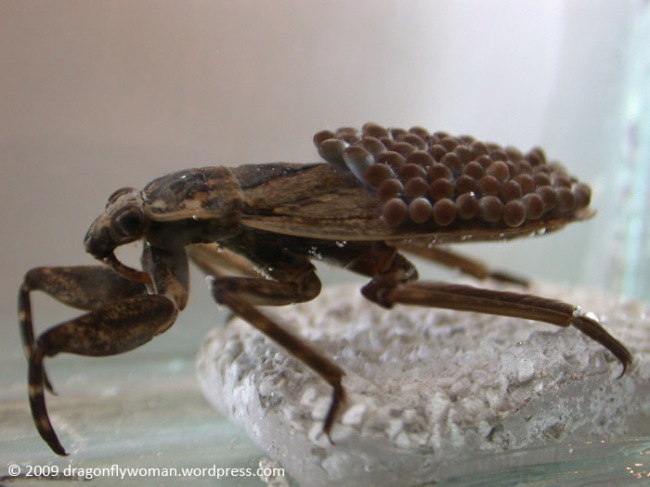 Some insects lay their eggs in clusters and others will lay them one by one and really spread them out.  Water bugs lay in clusters so you can see the cluster of eggs where it has been laid: on this male Abedus herberti’s back.

If we zoom in a bit closer, we can start to see what the eggs look like:

Abedus herberti eggs happen to change in structure about halfway down, so that’s why you can see the brown change to grey in the photo above.  Some insects do this, others do not.  Regardless, the shell of insect eggs has a special name: the chorion.  Let’s zoom in a bit more and get a good close look at the chorion on the top of the egg:

This image was taken using a scanning electron microscope (SEM) so that you can get a VERY close look at the structure of the chorion!  This egg was mounted onto an SEM stub upright so that you are looking down at the top of the egg here.  Notice the area indicated by the arrow.  That area is called the micropylar region.  If you look very closely at the image (you can click on it to make it bigger), you can see little white marks within the micropylar area.  Those lines represent the micropyles: 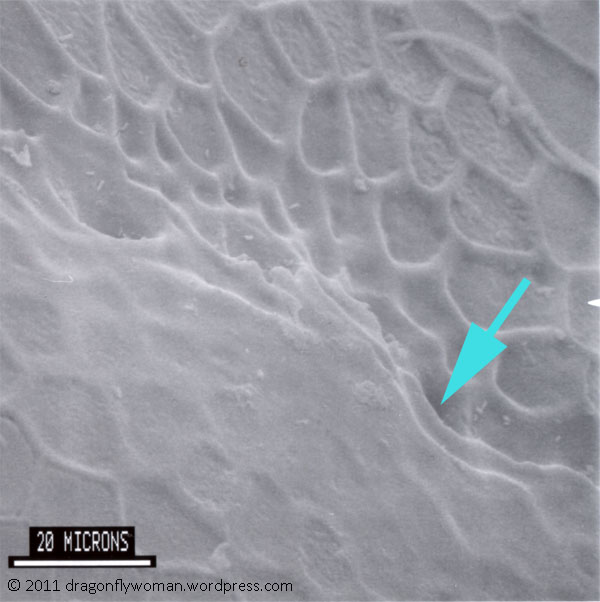 Eggshells are meant to contain the animal growing inside them and protect them from the environment.  If anything needs to get into or out of an egg, it has to go through the shell.  That’s where the micropyles come in!  Female insects produce the eggs, but the chorion is deposited before the eggs are fertilized.  Sperm have to get inside the eggs to fertilize them and have to go through the shell to do so.  They enter through the micropyles to pass through the chorion to the egg waiting inside.  The arrow in the photo above shows one micropyle within the micropylar region of Abedus herberti.  There is a second micropyle to the left.  This species has anywhere from 2 to 7 micropyles arranged in an arc, but other insects have different numbers and arrangements of micropyles.

Let’s zoom back out a bit and take a look at the structure of the top of the egg again:

In this image you can see the fine structure of the chorion and see all the little polygons that cover the surface of the egg.  Many insect eggs exhibit raised polygons similar to the ones you see in the Abedus herberti egg.  These are an artifact of the chorion production process in females.  I’m not going into it now because the process by which insects produce eggs is long and involved and better suited to a series of posts (I wrote 19 single spaced pages on this subject as part of the written part of my Ph.D. comprehensive exams!), but those polygons represent the shape of cells that are involved in building the chorion and they’re visible on many insect eggs.

The embryos developing inside the egg need oxygen to survive, but they have to get it from the atmosphere outside the eggshell.  That means the oxygen has to cross the eggshell before the embryos can make use of it.  Sperm enters the egg through micropyles.  Oxygen enters through aeropyles.  The arrow in the image above points to an aeropyle on the chorion of Abedus herberti and you can see several of them dotting the surface of the egg.  I think they look rather like lunar craters!  Let’s take a closer look at an aeropyle:

The two holes in the center of the image are aeropyles, little holes in the chorion that allow the embryo inside to get the oxygen it requires.  The exact path oxygen takes from the atmosphere to the developing insect is a little complicated and probably varies from species to species, but the aeropyles are where the path begins.  The number and arrangement of the aeropyles varies across species quite a bit.  Some insects have them distributed across the entire chorion.  Others keep them localized in specific areas (Google “pentatomid eggs” for some good examples).  Many aquatic insect eggs don’t have aeropyles at all and depend on oxygen flowing directly through the shell.  Some aeropyles have sieve-like covers over the opening and others are just big gaping holes like the ones you see in the image above.  There’s a lot of variation, but they all share a common goal: allowing oxygen to enter the egg.

Did you notice that the area within the polygons near the aeropyles looks kinda spongy in the image above?  That’s because the eggs in this species have a structure called a plastron network.  Plastron networks are meshworks made up of many tiny projections of the chorion.  This meshwork is thought to trap air against eggs when they are underwater so that they don’t drown.  Many terrestrial eggs have these plastron networks and this structure may allow them to survive accidental submersion for some time.  Water bugs also usually have plastron networks that may be responsible for their survival while they are underwater.  Lots of other aquatic insects that lay their eggs in water don’t have these structures at all.

The structures I mentioned above are the typical structures you find on most insect eggs.  However, you can find other structures depending on the species.  Giant water bugs absorb water from the environment and the water passes through a structure at the base of the chorion called the hydropyle.  A few other insects have hydropyles.  Other species will have structures to keep their eggs in place once they’ve been laid.  Still others might have horns or other structures that allow them to respire more efficiently.  Just like the animals growing inside them, insect eggs show a lot of variation in color, structure, and arrangement of the structures and can differ a lot from species to species.

I’m still taking entries for my contest for a few more days!  If you want to win the mug, be sure to leave a comment here for your chance.  The winner will be announced Wednesday.

16 thoughts on “The Anatomy of Insect Eggs”