In the Insect Discovery program I am a part of this semester, we split whole classes into four groups and rotate everyone through four stations.  At each station, the kids learn about scientific concepts through hands-on activities with insects.  After all 30 or so kids have worked through all four activities, we get everyone together for one final activity: a drawing.  It’s a very simple activity where we ask the kids to draw an insect, either real or imaginary.  When they finish with their drawings, we have them write or tell us where their insect lives, what their insect eats, and how it protects itself.  We then give them each a blank sheet of paper, distribute markers throughout the room, and set them loose.  The kids LOVE this activity!  And, when they’re done, they’re given the choice of keeping their drawing or donating it to Insect Discovery so we can use their art to decorate the room the following year.  We have a really big pile of drawings already, even though we’re only a third of the way through the semester and most of the best drawings end up going home with the artists!

Today I thought I’d share some of my favorite drawings the kids have done so far this semester.  Narrowing it down to 5 was actually quite hard and I had to develop criteria for deciding which pictures were worthy of making my “top 5” list.  I eventually settled on creativity, those drawings that I thought were particularly well thought out or so bizarre that they made me laugh.  So, without further ado, I give you my favorite 5 insect drawings done by 7 year olds: 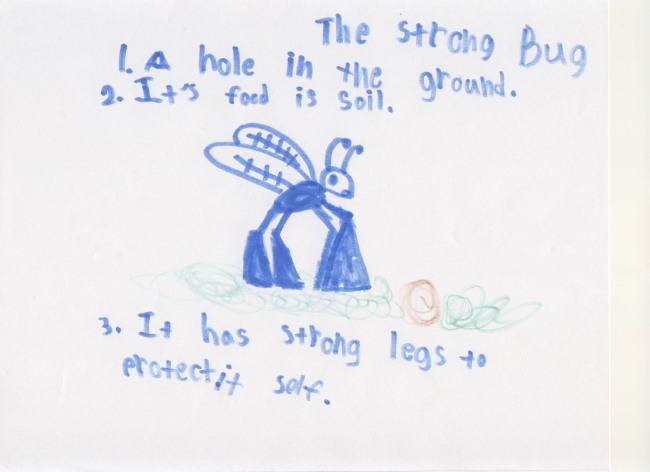 As you can see, Strong Bug lives in a hole in the ground, eats dirt (not terribly nutritious, but hey – to each his own!), and uses his super strong legs to protect himself.  However, I also imagine that this bug also stomps a lot of other bugs, maybe the ones he doesn’t like or that annoy him.  Or maybe he uses his giant body builder style legs to stomp the people who teased him as a kid for having scrawny chicken legs.  Remember that Gary Larson cartoon with the ant child wearing shoes in the house and stomping his siblings?  This bug reminds me of that, a scourge of smaller bugs that get in his way.  Love it!

The Rocket Bug is a continental Italian omnivore that dines on ants with a light salad on the side.  When she is disturbed, the rocket bug fires up her rocket and blasts herself into the sky to get away from predators.  Rocket bug flies super fast when she needs to.  Pretty cool, huh?  Perhaps she’s powered by formic acid…

The Acid/Lightning Bug is really amazing!  He lives in the desert and has a hard shell to protect himself.  But that’s not all!  Oh no.  This bug is also capable of shooting not only acid out of its butt, but lightning bolts as well.  Predators beware the butt lightning!  Did I mention he’s also invisible?  Probably makes him great for sneaking up on the things he likes to eat, though I’m not exactly sure what his favorite foods are.  The kid who drew this didn’t ever tell me what this bug eats.  Still, don’t you wish you were an invisible, acid-and-lightning-shooting bug with an impenetrable shell?  Acid/Lightning Bug rocks!

The kid that drew this picture was about the most annoying second grader I’ve ever encountered, but that doesn’t stop me from loving his drawing!  Thankfully, he told me all about it because he didn’t record its natural history in writing.  This is the Smoke Bug.  He protects himself by waving those three tendrils coming off his head, giving the predator the impression that the bug is actually a small fire that’s giving off smoke.  Most things don’t like fire and will leave the bug alone.  But say a predator isn’t fooled by the miniature, rather improbable fire it encounters.  Never fear!  Smoke Bug has a backup plan!  See those eyes on each tendril?  They help smoke bug see, but when threatened they turn into laser shooters that fire lasers at the predator.  Don’t f*** with Smoke Bug!  He be shooting lasers out of his eyes!

Eater of Loved Ones 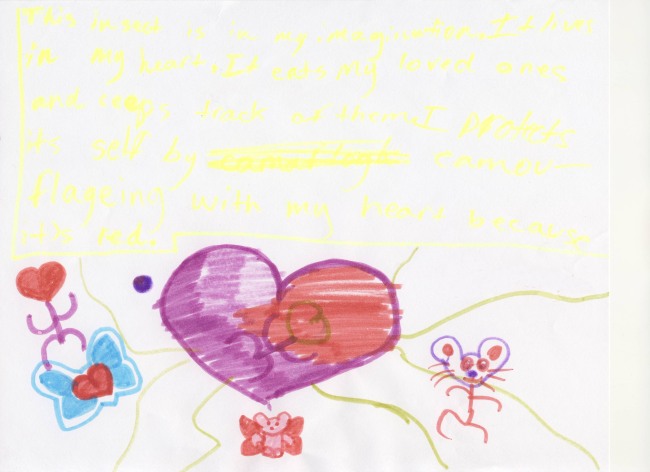 The Eater of Loved Ones

I nearly shot the water I was drinking out of my nose when I came across this one!  The description, written in that horrible nearly invisible yellow writing, really says it all:

“This insect is in my imagination.  It lives in my heart.  It eats my loved ones and ceeps track of them.  I protects its self by camouflaging with my heart because it’s red.”

I hope that this child didn’t mean that this bug eats her loved ones.  Maybe the bug is supposed to watch over her loved ones instead?  I’m also convinced that she didn’t think things through enough when she decided to make her cute little bug (though let’s not forget that this insect is a vicious man-eater!) a parasite of her heart.  I have this horrible picture in my mind of this bug that eats her relatives and then burrows into her chest to hide next to her heart…  Of course, I’m not exactly sure which part of the drawing is the insect.  I think it’s the stick person with the heart for a head that’s happily embedded in the heart.  Disturbing on so many levels, but you have to appreciate the creativity!

Aren’t these drawings fabulous!  I just love the thought that went into them.  It’s great working with children because they don’t see anything wrong with a bug that literally lives in their hearts or pretends it’s smoke to avoid being eaten by a predator.  I love looking through the drawings!  I’m thinking of posting some more of them on Flickr.  If you’re interested in seeing more, leave a comment below so I know if it’s worth the effort to scan/upload them!