A lot of insects have moved into my house over the past few years.  They’re kind of annoying and some of them are kind of destructive.  I put up with them mostly because I can’t stomach the idea of inviting a pest control company (i.e. Terminix, the dreaded Terminix, because my landlord has a contract with them and we can’t use anyone else…) into my home and having them tell me that they need to fumigate.  Fumigating isn’t a trivial matter.  I live in half of a duplex and judging from the three other duplexes in the complex that have been fumigated over the last two years, they can’t just fumigate half of the building.   That means moving out five people (including 2 kids next door), three dogs, and some live insects that need to stay alive while they tent our entire building and pump it full of chemicals overnight.  Bleagh…  Unfortunately, this is probably going to happen thanks to my recent discovery of this: 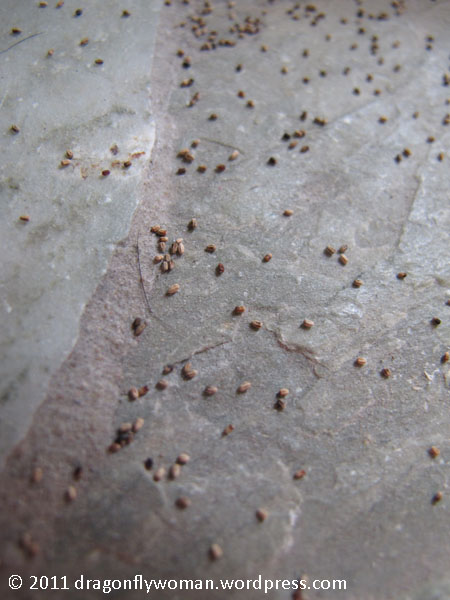 Termites!  That’s the one thing I can’t get away with “forgetting” to tell the landlord about because they will damage the building itself.  I have an appointment with Terminix coming up so they can tell me what I already know: I have dry wood termites in the beam above my front window.  The little pebbles in the photo are clearly not the termites themselves, but they are evidence that the termites are chewing their way through the beam.  They’re frass pellets, or termite poop.   They’re all over the table below the beam, but there are also little piles of pellets under the suspiciously round holes in the beam.  Stupid termites!  Why did they have to chew on MY beam?!  Their eating the wood of the one person in the entire complex that dreads the arrival of Terminix the way children dread booster shots.  Grrr…

On the other hand, if Terminix recommends fumigating, we will get rid of some of the other insects that have made mi casa their casa.  I’ve already mentioned these:

Booklice at home on my paper flower bouquet.

The booklice disappeared from my paper flowers for a while, but then they came back, so I’ve got a nice big colony of them going on top of one of my bookshelves.  I find booklice all over my home, but I don’t even care that they’re there.  If they’ve infested something really badly, I just chuck it into the trash can out front where they are sure to die a hot, stinky death in the Arizona sun.

These guys are a little more annoying:

Most of the silverfish live behind my couch somewhere and have a bad habit of walking across my face while I’m stretched out watching TV.  Scares the bejeezus out of me every time!  I just brush them off and move on, but they really bother my husband.  He has been known to squeal like a girl when they emerge from their dark happy place behind the couch and crawl onto his bare skin.  Mr.  Dragonfly is not amused by silverfish!

My personal least favorite insects (other than the Terminix-inducing termites of course) are these:

Ants on my kitchen counter.

We have at least 4 different species of ants living in our house now.  I find them living in strange places.  One nest lives under the carpet along the wall in the dining area.  Several live in the wall between the bathroom and the kitchen.  Still others live in the pots my plants are growing in.  The strangest place I’ve found an ant nest in my house: inside one of the cups of a bra in my underwear drawer!  And they weren’t just under the bra – they’d actually burrowed down inside the fabric.  I froze the bra (I know, I know – it sounds like a bad slumber party prank!) and then tried to extract the ants, but I couldn’t get them out and had to chuck it.  Sigh…  The ants bother me because they like to sting me (not the ones in the photo, but some of the others).  I have been known to occasionally lose it when they’re out in force in my kitchen and get so frustrated that I squish a couple hundred of them, laughing maniacally as I do so.  And check out Well-Nigh Wordless Wednesday (as I’m now calling it) next week for photographic evidence of what happens when indoor ant colonies meet the monsoon!

This is the most recent addition to my home’s insect fauna: 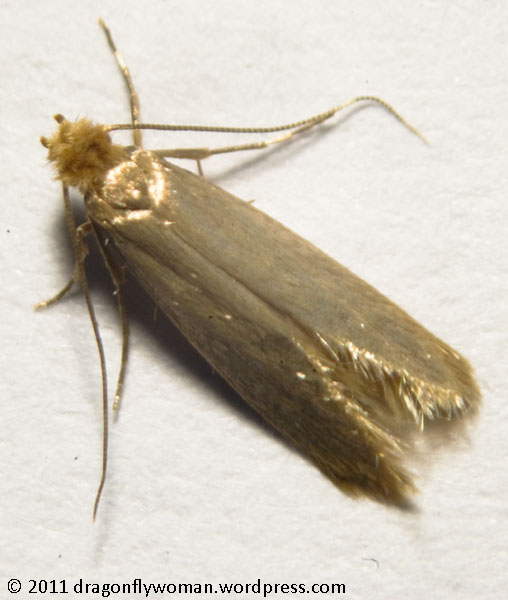 I’m not entirely sure what these are (they fall into the LBM – little brown moth – category and I’m hopeless when it comes to IDing them), but I have a sneaking suspicion that they’re happily living in a closet somewhere and helping themselves to some delicious pieces of rarely worn clothing.  They seem to be concentrated in the bedroom, which supports this hypothesis, but I find them in other rooms now and then too.  If anyone happens to know whether this little 5mm long, nondescript brown moth is actually a clothes moth, I’d love to hear from you!  But until I figure out what they’re destroying, I couldn’t care less about these little guys.  They flutter around my lamp at night occasionally and sometimes get in my face, but they’re just kinda there otherwise.  And honestly, the damage my dog does to my clothes when he decides to pull a piece of my clothing out of the laundry basket and chew his rawhide on it is WAY worse than anything some little weenie moths are going to manage.

Five different types of insects living in my house!  I was a little shocked when I came up with the idea for this post that I actually had five to talk about.  If I count the little tiny spiders that seem to love our baseboards and windowsills (don’t know what they are) and all the ant species separately, we’ve got 9 species living in our house with us.  If I’m wrong about having brought the 3 brown banded cockroaches I’ve found in the house  over the past 3 years home with me from work (not just wishful thinking, I swear!), that brings the number up to 10!  And that doesn’t even take into account the things that live just outside the front and back doors that make their way into the house every few days…  But my insects are lucky.  They live with one of the very few people in the city who will tolerate their presence and hates the Terminix man more than she hates her bugs.