The spring semester is officially over for me!  It was a really great semester too.  I worked on finishing my Ph.D. by writing part of my dissertation and did one of the best teaching assistantships I’ve ever had.  Insect Discovery was fabulous!  Absolutely loved it.  For this week’s Friday 5, I thought I’d celebrate (and mourn just a little) a great semester by sharing 5 of the invertebrates I’ve been working with.  Some of these are used only in the Insect Discovery classroom and I cart others to schools all over town.  I’ve gotten really attached to these guys, so I’m going to miss them! 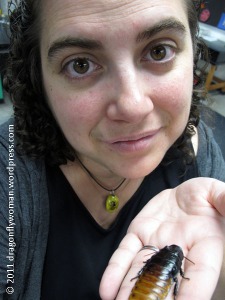 Me and my best roach pal, Jeffrey

I already wrote about my favorite Madagascar hissing roaches.  I spent a lot of time watching them over the semester and learned some interesting things about how they behave, at least in captivity.  One of my favorite things happened with my own pet roaches just a few days ago.  I was in the middle of a presentation at a school when I heard several kids go, “Whoa!” and suddenly the whole class was up off the floor and running over to my roach cage.  My super gigantic dominant male (Mr. Darcy) was upset the small subordinate male (Mr. Knightly) was up on top of the log near the big male’s girls, Elizabeth and Emma.  They’d gotten into a massive fight.  I’ve never had hissers move and hiss so much!  It was impressive.  I think the fight overloaded the kids’ brains because they could think and talk of nothing else for the last 10 minutes.  It was pretty darned cool though… 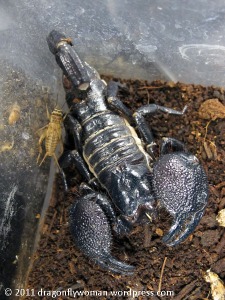 We had three emperor scorpions we used for a station on adaptations.  My favorite scorpion was the one I featured in the video earlier this week.  He was quite active compared to the other two and a lot of fun to show off to the kids.  Just in case you were wondering, these animals have several adaptations.  They’ve got the big claws to help them grasp food (they crush crickets quite easily) and dig their burrows, they’re dark so they’re hard to see when they’re out at night, they live underground where it’s cool and relatively safe, and they have that big stinger.  I’ve never seen an emperor scorpion actually use its stinger, but maybe crickets aren’t worth bothering with.  Even though emperor scorpions are the largest scorpions in the world, their sting isn’t supposed to be that bad.  I’d prefer not to test that though.

The millipedes. So hard to get a shot of these little buggers...

I don’t know what species of millipede these are, but they sure were popular with the kids!  I used them in two different ways.  First, they were part of the decomposer station, so they were in a big plastic box full of soil that the kids would dig through to find the decomposers.  There were three millipedes per box and the kids wouldn’t rest until they found them all!  I also used the millipedes when I went to classrooms, the animal I brought as an example of an animal that wasn’t an insect.  Boy did they love it!  I’d say about 95% of all the nearly 2000 kids I worked with held the millipede, even if they didn’t hold the roach.  I found that surprising, but it always made me smile.

Who doesn’t love butterflies?  Okay, I don’t particularly love butterflies, but I liked these guys.  We used painted ladies, a native butterfly that I think is very pretty.  These butterflies were a little crazy though.  I don’t know if it was the long trip across the country as pupae that made them nuts or what but most of them either flew/flitted around in a total panic or barely moved at all.  The kids didn’t care.  They’d sit inside the butterfly cage and watch them fly around as part of one of their stations.  We’d give every kid a butterfly to hold on his or her hand for a few minutes while they were inside.  Most kids are told that butterflies will die if they’re held (not true), so it was a really special experience for them.  We’d find butterflies in some strange places every now and again too.  One mom found one flying around the bathroom down the hall and the prof with the office around the corner had one fly into his office one day.  I’m sure we didn’t hear about them all!

Ah, the bess beetles.  I used these the whole semester and I fell in love with them.  They are gorgeous shiny black (they’re also called patent leather beetles), but I like them because they are pissy little beetles that make this great squeaky noise to let you know.  The kids really liked them.  We were told that the beetles don’t bite, so I cavalierly handed them around to hundreds of kids all semester.  Then I was in this really, really awful classroom of 4th and 5th graders that were being mean to one of my beetles.  Rather than venting his anger on his tormentors before I took him away, the beetle waited until I was just about to put him back in his cage to sink his jaws into my finger.  It was surprisingly painful!  It didn’t draw blood, but I had two little dents in my skin for part of the day.  Didn’t stop me from getting the beetles out at the next classroom visit though.  I am a little more careful about letting the kids hold them now, but nothing’s changed otherwise.

Yep, I’m going to miss the bugs.  But here’s to a great, and hopefully final, semester!  Now, if only I was done with my dissertation…

6 thoughts on “Friday 5: Invertebrates I’ve Been Using While Teaching”