I’ve had a lot of time to think during my trip out of town for a family emergency (it’s going to have a happy ending, but does mean all recycled photos today) and I spent some of it thinking about what insects-and-water-quality post I should do next.  I had several ideas about what I might write about.  Perhaps I should talk about diversity and water quality or the metrics and bioassessment tools that are used by state and federal water quality managers.  Suddenly it occurred to me that I haven’t ever discussed one of the most important topics!  I’ve never explained WHY insects are such great indicators of water quality and why using them in this manner is so popular with researchers and water quality managers.  Today I’m going to do just that!  Really should have done this post ages ago, but sometimes inspiration doesn’t hit at convenient times.

There are several reasons why using insects as bioindicators of water quality is so popular.  One of the most important is that aquatic macroinvertebrates are found in nearly every body of inland (non-marine) water, so they are ubiquitous.  A little puddle of water in a rock the desert?  Yep, there are bugs in there.  A huge river in the Amazon?  Lots of bugs there!  A stream with a pH of 2 (highly acidic for those of you unfamiliar with the pH scale)?  Even there  – and I’ll talk about the insects I found in just such a stream in a future post.  There are insects that can live in pools of petroleum, hot springs that would boil a human alive, and water that’s hundreds or thousands of times saltier than the ocean.  All in all, there are very few biological organisms that you can find in so many different aquatic habitats.  As a result, insects and other macroinvertebrates are the darlings of water quality researchers while many other aquatic plants and animals are completely ignored.

Macroinvertebrates are also useful as indicators because they are abundant.  If there are insects in a body of water, there are usually lots of insects in that body of water, even in highly polluted water.  This means that you can get a decent sample without severely impacting their populations in most places.  This isn’t always the case with some of the bigger animals like fish.

Sometimes you need a tissue sample to see how water quality is impacting aquatic wildlife, such as an analysis of the amount of lead being absorbed by the wildlife in a stream.  You often need fairly large tissue samples to run these sorts of tests, so the bigger the animal the better.  Fish are perfect, but they’re not found in every body of water.  Microorganisms such as algae, bacteria, and protozoans abound in many types of water, but they’re very small.  If you need even a small tissue sample the size of, say, a bloodworm, imagine how many bacteria you need to collect from the water to create a big enough sample!  Not only are insects abundant and ubiquitous, but they’re a lot bigger than most other abundant and ubiquitous organisms.  This makes them more useful as indicators. 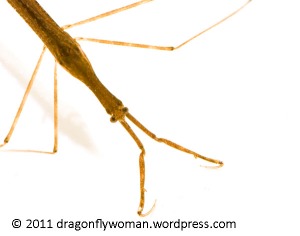 Insects are easy to collect compared to a lot of other things too.  Consider how difficult it is to sample fish!  You can use a rod and reel and spend days collecting 10 or 12 fish, carry a massively heavy electroshocking unit with its associated risk of electrocution if something goes wrong, or poison all the fish in an area with a chemical like rotenone (which can also kill insects and amphibians).  You could always just sample the water directly, but the last thing you want to do in a remote location is carry gallons of water to your vehicle.  Insect samples are easy!  One aquatic insect net and a decent sized bottle containing alcohol is enough to collect the sample and get it back to the car.  Lightweight, portable sampling equipment is preferable to heavy gear, particularly if you have to hump it into remote locations on foot, and sampling insects is one of the lightest choices.

Water quality analyses of any sort are very expensive.  While it might seem like the easiest way to determine whether a body of water is polluted, analyzing the water itself is particularly spendy.  There are so many man-made and naturally occurring compounds that could be in water that you can run hundreds of tests on a single sample looking for every possible pollutant.  Even running a very simple set of analyses looking at nitrogen, phosphorous, and carbon compounds, biological oxygen demand, and a few other parameters can cost nearly $1000.  Insect samples are also expensive to process and analyze, but they’re not as expensive as water analysis, maybe $300 per sample as opposed to $500-$1000 or more.  For any given budget, you can collect more insect samples than you can water samples, so insect sampling is often preferred. 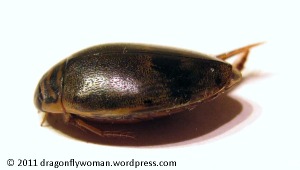 Finally, one of the things that makes aquatic insects and other macroinvertebrates such great indicators is that they live in the water all the time and are reasonably long-lived.  Pollution can and sometimes does occur steadily over time (imagine a wastewater treatment plant outfall or a paper mill dumping waste into a river), but a single event can cause massive problems in a body of water.  Sometimes, every trace of the pollutant has disappeared from the water by the time a researcher can collect a water sample from the stream.  However, many of the insects were in the stream during the pollution event!  This means that, even if you can no longer find the pollutant in the water, or never even knew a pollution event occurred, the organisms in the stream can show you that something is wrong.  You might not be able to figure out exactly what caused the problem, but you can at least see that there was a problem and start looking for possible sources.

All in all, I think it makes sense to use aquatic macroinvertebrates to assess water quality!  They make fantastic indicator species for so many reasons that they have become one of the best tools researchers have for determining water quality.  They’ve proven themselves in countless studies and their use has become a standard part of sampling protocols for many state and federal water quality agencies.  They’ve become very important to a lot of people.  As an aquatic insect lover, it makes me happy that my favorite bugs matter.  And really, who doesn’t love an aquatic insect?  :)