I’ve been so wrapped up in family and work related things recently that I’ve barely had any time to get into nature and experience the world outside.  But I’ve been dreaming about going oding too.  Oding, or odonate watching, has become a popular pastime for a wide variety of people  over the last few years.  Similar to birding, people who participate in oding (calling them “oders” just doesn’t sound right…) visit wild or man-made water bodies, usually toting binoculars or cameras, and see how many different types of odonates they can find.  Many people are keeping life lists of dragonfly species they’ve seen, just like birders.  If the wealth of recently published odonate field guides is any indication, more and more people are joining in on the fun and I expect that the activity will become increasingly popular over the next several years.

Because I have not been able to go oding myself, I thought I would highlight the places I would go if I had the time.  The following are my 5 favorite oding spots in or around Tucson, AZ:

The Sweetwater Wetlands is a huge constructed wetland on the west side of Tucson.  Wetlands are phenomenally good at filtering nasty stuff out of water and many constructed wetlands are built with the intention of improving water quality.  The Sweetwater Wetlands are no exception and was designed to filter some of the wastewater from the nearby wastewater treatment plant.  While the water smells a little funky (as you might expect in a wetland designed to treat wastewater), the wetlands support a ton of wildlife!  As you can see in the photo, there is a lot of green stuff around the ponds.  There are also a ton of dragonflies and damselflies!  While the diversity of the odonates at Sweetwater is not as high as in some other locations in my area, the sheer number of them at this site is astounding.  I love going to Sweetwater to take photos of odonates because you are bound to get many good shots.  I rarely get to check anything off my life list when I visit, but who can resist seeing thousands upon thousands of dragonflies during a 20-30 minute visit? 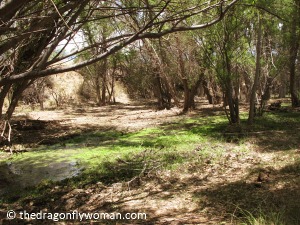 Las Cienegas is one of my favorite places to visit in southern Arizona.  It’s always about 10-15 degrees cooler than it is in Tucson, it’s got a lovely spring-fed stream that has water year-round (it’s under the green stuff in the photo – that’s watercress on top!), it’s got the best ancient old cottonwood, and there is hardly ever anyone else there.  Plus, there are dragonflies!  There might not be tons of them and there might not be all that many different species on most visits, but you see some really spectacular ones there.  Besides, few things beat getting out of town and watching dragonflies in the shade of old cottonwoods while trodding on the mint growing along the banks of the creek.  Heaven! 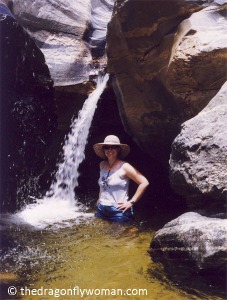 Me in Sabino Canyon. Photo by Laura Goforth.

I’ve been going to Sabino Canyon as long as I can remember.  Even when my family lived in Colorado and we only visited Tucson once a year, we always made a trip to Sabino.  It’s a gorgeous place to visit on the northeast side of Tucson and has a cool, clear creek that tumbles down off the Santa Catalina Mountains.  It’s chock full of fabulous aquatic insects (and a whole lot of invasive, awful crayfish) and there are always a lot of dragonflies flying around.  Sabino is where I saw my first giant darner (Anax walsinghami) and my first filigree skimmer (Psuedoleon superbus).  I was blown away by the beauty of each.  It’s also home to the Sabino dancer (Argia sabino), a damselfly listed on the IUCN Red list as a vulnerable species.  Sabino is nearly always crowded, but it’s such a nostalgic place for me and so pretty that I love it anyway.

Like Sabino, I’ve been visiting Madera Canyon for as long as I can remember.  It too has a lovely, clear creek flowing down the middle of it.  It too is full of aquatic insects and attracts many odonates.  Madera is a little less crowded though and has some different odonates that you don’t see in Sabino, so it’s still really exciting to go there.  It’s nice to take a camera, a soup strainer, and a lunch.  That way, you can have a picnic by the creek, snap a few photos of any odonates you see, and collect some aquatic insects.  And, you can do this all on one perfect 3 hour trip!  What a great place! 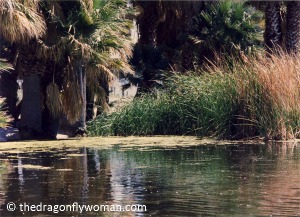 Agua Caliente is another nostalgic place I’ve visited since I was a kid, but it is different from every other place I’ve mentioned so far.  Like Las Cienegas, it is a spring-fed system, but here it fuels a natural oasis in the desert valley east of the city.  The property used to be a cattle ranch and has been significantly modified to create more cattle ponds with a little stream that runs between them, but the whole system still depends on the spring for its water.  Now it’s a county park and is known as a great place to bird (it’s got wood ducks!), but I keep going back for the odonates.  The diversity of habitats within Aqua Caliente Park results in a high diversity of species within a small area, which makes this a great place to go with a pair of binoculars and a camera and knock off several species on your life list in only an hour or two.  It’s really gorgeous too!  I love Agua Caliente!

Man, now I’m itching to get out and do some oding!  Maybe I can cram in a quick trip to Madera this weekend…

Unless otherwise stated, all text, images, and video are copyright TheDragonflyWoman.com