For last week’s Well-Nigh Wordless Wednesday, I shared a photo of a fly that a lot of people in my city think is a bee.  I can see why people think it is a bee because it’s got that bee-like coloration, but to me the insect all but screams “I’m a fly!”  Nature can be tricky sometimes, especially among the insects.  Thousands of insects look a lot like other insects, many mimicking stinging, biting, or poisonous insects for protection.  Today I’m going to go through the things you should look for to be sure an insect is actually a fly.  This is a fly:

There are several things to look for to determine whether something is a fly or not.  Let’s first consider the name of the order that the flies belong to: Diptera.  As is so frequently the case in biology, the name tells you a lot about the insects within the order.  The prefix di- means two and -ptera refers to wings.  Thus the order Diptera contains insects with two wings, the defining characteristic of the group.  Most insects (with a few non-fly exceptions, including the bizarre order Strepsiptera and some scale insects) have four wings in the winged stage.  Some insects, like the bees and some butterflies, have special structures that hold the fore and hind wings together so that they can look like they only have two wings at first glance (tricky!), but they have four if you look closely.  The flies don’t have hind wings at all!  Instead, they have these little knobby things: 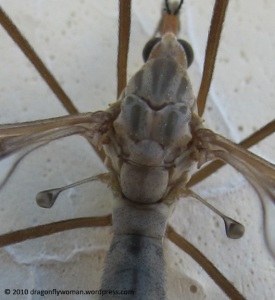 I talked about these structures, called halteres, in a previous post so I won’t say too much about them here.  Briefly, the halteres are remnants of the hind wings in flies and act as gyroscopic organs to tell flies how they are positioned in the air as they fly.  The halteres are likely the reason flies have such amazing control over their flight.  All flies have halteres, though sometimes they’re hidden under the wings and hard to see.

Not always!  Sometimes it’s hard to get a good look at the wings so that you can count them.  Luckily, the eyes can often provide a clue to whether an insect is a fly or something else.  Flies tend to have very large eyes that wrap around the front and/or sides of their heads, sometimes even meeting in the middle:

You’ve tried swatting flies, right?  It’s pretty hard to do!  Not only are flies expert fliers, but they also have those giant eyes.  They can see you coming at them with a fly swatter and move out of the way before you squish them.  Not all flies have giant eyes like the fly in the photo, but most of them do.  Bees and wasps tend to have smaller eyes than flies, which can help you distinguish the two groups.

Flies often have strange antennae too.  These are called aristate antennae:

A fly with large eyes and aristate antennae

Not all flies have aristate antennae though.  Many of them, such as the crane fly, have longer antennae.  Flies tend to have short antennae compared to other insects, however, and they are often very complex in structure.  Bees and wasps have longer, simpler antennae than flies, making the two groups easy to tell apart.

Finally, flies generally have mouthparts designed for sucking liquid food.  The variation in mouhtparts among the flies warrants its own post though, so I’m not going to go into detail here.  If you’ve ever been bitten by a mosquito or a horse fly or watched a house fly lap up food off a dirty plate, you have an idea of how some of the fly mouthparts work.

I want to end this post with a bit of trivia.  Ever wonder why a crane fly, a flesh fly, or a hover fly is considered a true fly while a mayfly, a dragonfly, or a stonefly is not?  They all fly, but they’re not all flies.  Take a close look at how I spelled those names for a hint!  According to traditional entomological naming practices, a true fly in the order Diptera has the “fly” part of its common name separated from the rest of the name while things that are not true flies have the “fly” part tacked on to the end.  Thus, a crane fly is a true fly while a dragonfly is a flying insect belonging to an order other than Diptera.  This distinction is muddled a bit these days with people changing how the names are spelled here and there, but for the most part this trend still holds.  Next time you see the word “fly” separate from the rest of a name, you can be pretty sure that the author is referring to something belonging to the order Diptera and not some random flying insect with four wings.  Consider my favorite quote from Shrek:

“You mighta seen a house fly, maybe even a superfly, but I bet you ain’t never seen a DONKEY FLY!”

If you follow the traditional entomological naming format, one would have to assume from this quote that Donkey is a true fly, NOT a donkey!  To indicate that Donkey is not a fly and is in fact some other flying creature, he should technically be a Donkeyfly.  :)

For more information about flies, I highly recommend Morgan Jackson’s wonderful blog, Biodiversity in Focus.  He takes much better fly photos than I do and his love for flies oozes out of his writing.  Be sure to check it out!