If you’ve read insect blogs recently, you’re probably aware that Bug Shot 2011 took place last weekend.  I am thrilled to say that I was there, a giddily happily part of the inaugural group of insect photography enthusiasts learning from the great Alex Wild, John Abbott, and Thomas Shahan.  If you have a chance to go next year you should because it is a wonderful experience!  I couldn’t have been happier and thought it was time and money very well spent.

I’m writing a post about Bug Shot that will go up on Monday, so you won’t get many more specifics here.  Instead, today I want to discuss something rather tangentially related to Bug Shot.  My trip to Shaw Nature Reserve in eastern Missouri was the first time I’d spent much real time outdoors in the Midwest since I was a kid.  As someone who’s lived in two arid western cities that hover right around desert rainfall levels her entire life, roaming around photographing insects in the more mesic Midwest was a bit of an adventure.  For today’s  Friday 5 I give you five things that make Missouri a very different place to photograph insects compared to my usual Arizona.

Every time I go to Missouri to visit my family, I think I’m prepared for the humidity.  Every time, I am wrong.  The humidity in Missouri is simply unimaginable when you’re a southwesterner.  I stepped off the plane in Kansas City last week and the humidity slammed into my chest like a brick.  Compared to the dry air on the plane, it feels like you’re suddenly breathing pond water!  And the humidity gives Missouri this very distinct smell too – very green with a mild musty undertone.  It was very hot the first few days of Bug Shot (Arizona hot!), but sweat doesn’t dry off your skin there.  You’d sit there steaming in your clothes with sweat pouring into your eyes, making it hard to focus the camera at times.  My camera lens even fogged up a few times, as illustrated by the big blurry spot indicated in the photo (might need to click on the image to expand to see it).  I was also constantly worried my camera was going to slip out of my hands, so I ended up holding it differently than I normally do.  Gave myself a blister!  Still, even with the heat and humidity, the trip was 100% worth it.

Allergen factory! AKA, a gorgeous grass.

I have major grass allergies.  When you live in the southwest, it’s easy to avoid grasses because there just aren’t that many.  I wear long pants to keep the grasses off my legs so I don’t get rashes and I take Claritin when I know I’m going to be out in the field, but those are my only real precautions.  The grasses at Shaw were taller than my head!  I wore long pants and long sleeves most of the trip (which contributed to the problem of #1 above) and took my Claritin, but it wasn’t enough.  My hands were exposed, so they got itchy.  My Claritin wasn’t keeping up.  Of course, it didn’t help that I loved the way the grasses look (isn’t the one above beautiful??!!) and I was getting close to take photos.  And the bugs LOVED the grasses, so you had to get down into them to get good shots.  Yep, grasses are evil.

A stonefly. At a blacklight! At 600 feet elevation!

This is another obvious one, but when you travel 1200 miles to another environment, suddenly there’s this whole new world of insects opened up to you!   In Arizona, I am ECSTATIC when I find a stonefly at a low elevation because their nymphs can’t live in the warm waters that flow through the lower elevation areas of the state.  In Missouri, even though it was hot during the day, there were large stoneflies coming to the lights at night, such as the one pictured here.  A very different experience for me!  The best insect of my trip by far was a scorpionfly I found by the light outside my cabin the last night.  We don’t have scorpionflies in Arizona and I’ve never seen a live one, so I started jumping up and down and going, “Oooh, ooh, OOOOOHHH!” before running inside to grab a vial to catch it.  I found Missouri’s mosquitoes much less annoying than Arizona’s though.  Maybe there’s a trade-off between grass allergies and the intensity of the mosquito bites I experience?

4. Leaves of three, let it be
(AKA, Poison ivy is also evil) 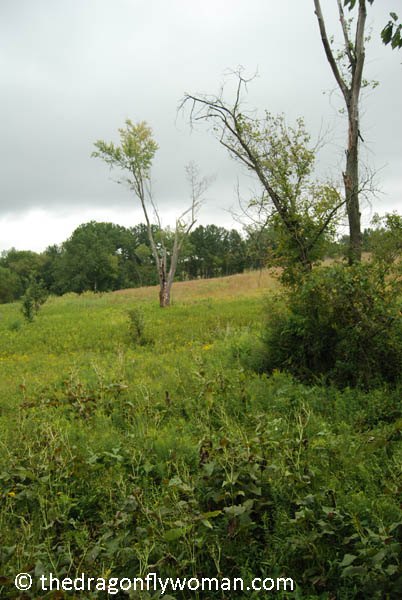 Lots and lots of plants. I'm convinced poison ivy lurks in there. It's good at lurking.

Arizona has poison ivy.  I’ve seen it!  I’ve come across about 3 total plants of it in the nearly 19 years I’ve lived in Tucson, so it is here.  Consequently, I go so long between sightings that I forget what it looks like.  I happen to be incredibly allergic to poison ivy and going anywhere I know it grows in greater abundance makes me nervous.  Shaw didn’t have too much of it and it only prevented one activity (a trip to the river to collect aquatics – and everyone aborted that trip, not just me), but there was enough scattered about Shaw that I got a little paranoid.  I mean, look at all those plants in the photo!  I was scared to walk out among the grasses because I was sure there would be poison ivy lurking in there.  I likely I missed out on some insects by sticking to the paths, but I also left Shaw without getting poison ivy.  It was worth it!  (On a related note, I also left with my 100% tick and chigger free record intact!  I don’t think they like me, but the feeling is mutual so it’s all good.)

5. The sun is a mass of incandescent gas 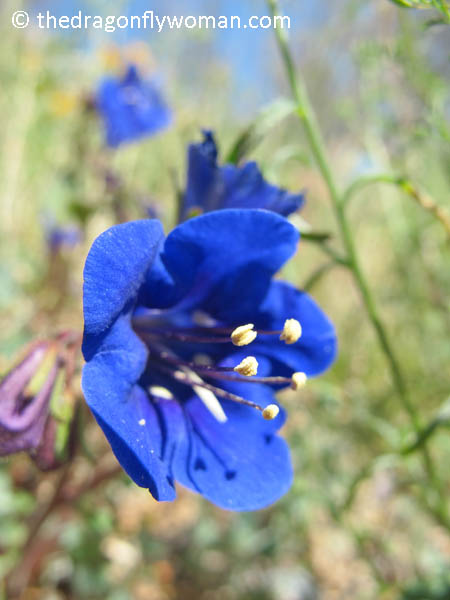 Arizona is famous for its sun.  It is incredibly intense!  You can sit outside for less than a minute in the summer and feel your skin start to cook.  Everything is insanely bright too.  I find the sun annoying, so I don’t enjoy the fact that we get over 300 days of sun a year.  Compared to Arizona, however, the sun in Missouri is downright mild.  The elevation’s lower (Tucson is about 2500 feet while I was told Shaw was right around 600 feet), but the humidity creates this sort of cloudy haze in the air that seems to block a lot of sun.  I can go outside without sunglasses in Missouri whereas I feel like I’m going instantly blind without eye protection in Arizona.  I thought the softer light made taking photos a lot easier because I didn’t have to deal with the harsh shadows that you get in Arizona, such as those in the flower pictured above.   It was great!

There may have been grass and poisonous plants, more humidity than I knew what to do with, and there was a real risk that you might encounter a brown recluse, but Bug Shot was so fabulous that these irritations did little to diminish the pleasure I got from the experience.  Stay tuned on Monday for a real post about this fabulous opportunity!

Unless otherwise stated, all text, images, and video are copyright ©TheDragonflyWoman.com