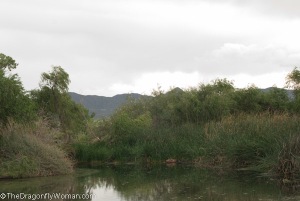 As promised last week, today’s post will feature a water treatment facility that we have in Tucson.  Like the facility I discussed last week (Gilbert Riparian Preserve – GRP), the Sweetwater Wetlands are part of Tucson’s plan to clean the water Tucsonans flush down their toilets.  Both Sweetwater and the GRP take effluent and turn it into much cleaner water.  However, there are some pretty strong difference between the two sites, and I think that makes for a very different visitor experience. 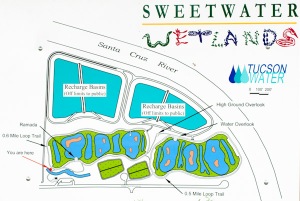 As far as I can tell, the goals of Sweetwater are similar to those at GRP.  However, it’s really obvious that the water treatment goals are more important at Sweetwater than the wildlife or educational goals.  There are some educational signs around the site, but not many.  The wetlands have created habitat for wildlife, but the facility doesn’t celebrate its animal diversity the way GRP does.  Also, there aren’t many interpretive presentations happening at the site unless you schedule a tour or school visit in advance.  The GRP advertises regular bird watching tours, interpretive walks, and events at its observatory.  Sweetwater definitely doesn’t have much of that going on.  After visiting the GRP, it seems a little sad that my city isn’t making better use of Sweetwater as an educational tool. 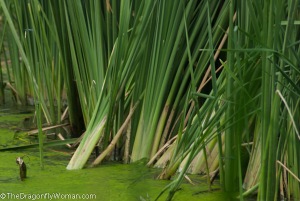 It does help clean water though.  Like the GRP, Sweetwater’s water comes from the wastewater treatment plant.  Unlike the GRP, most of this water isn’t simply treated effluent.  Some of it is, but the majority of the effluent from our wastewater treatment plants is dumped straight into the river and not the wetlands.  Instead, the water at Sweetwater is mostly water used to clean the filters at the treatment plant.  This is water that is too dirty to dump into the river, so it is diverted into Sweetwater instead.  The water at Sweetwater is pretty gross!  The whole site smells musty – and you can smell it from quite a ways away.  I don’t ever touch the water there because I’m a little worried about what will happen to me if I do.

Thankfully, the plants and the sun help clean and/or filter the water at the surface.  A lot of chemicals and contaminants are trapped on the bottom of the ponds as the water slowly flows through the facility.  The water eventually reaches retention basins and filters through the soil into the shallow aquifer 140 feet down, getting cleaner the deeper it goes.  Water from the shallow aquifer is clean enough to be used for landscaping around Tucson.  Sweetwater thus takes really nasty water and recycles it into water that is actually good for something, making it a valuable part of my city’s water treatment resources. 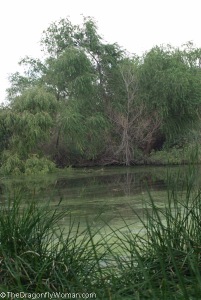 While the water at Sweetwater might be a little nasty, it really is a great place to see wildlife.  It’s fun being able to see aquatic birds in the city.  Snakes, lizards, and other reptiles abound.  There’s a resident bobcat and there are tons of birds.  In fact, lots of people go to Sweetwater specifically to look for birds.  I am not one of them, in spite of what everyone thinks as I head down the trail with my camera and binoculars.  I’m there for one reason: the dragonflies!

Sweetwater has an astonishingly large population of dragonflies.  There are few areas in Tucson that have the right combination of available water and vegetation necessary to attract large numbers of dragonflies, but Sweetwater most definitely has it!  My recent visit was on a hot, humid day and I’d expected most of the dragonflies to be resting in the shade.  Instead, there were still thousands of dragonflies flying around!  Some species were hiding in the vegetation around the ponds as expected, like the resting blue dasher: 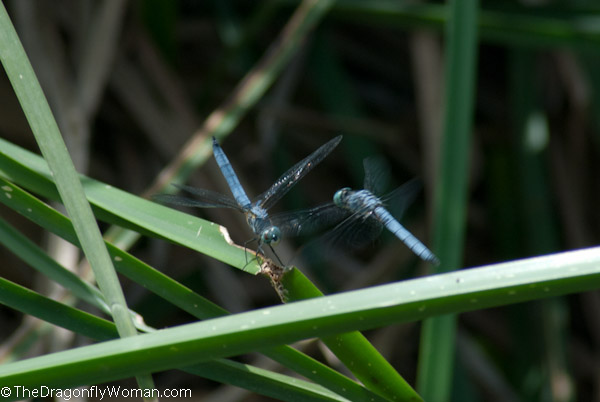 A male blue dasher (Pachydiplax longipennis) challenges another male in an effort to drive him away from his perch. The aggressor was largely ignored.

But others were flying: 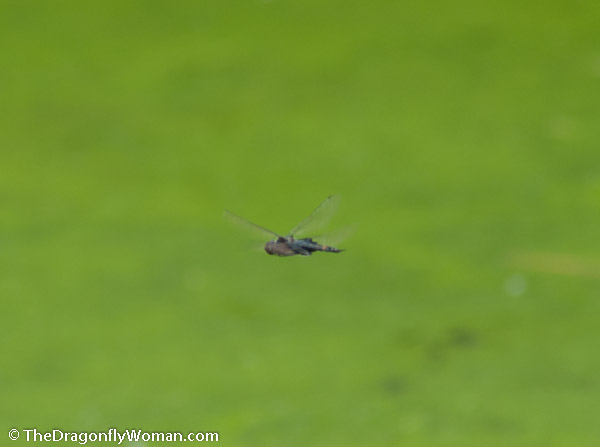 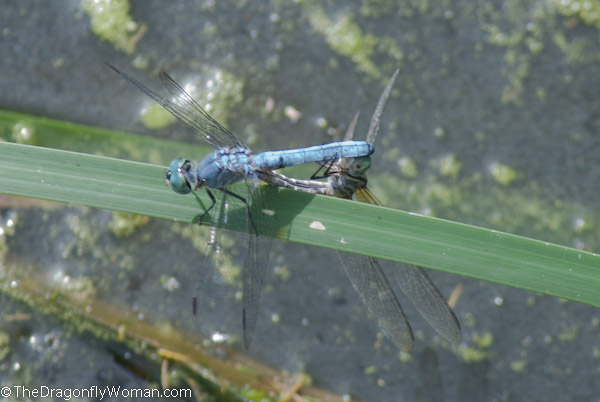 Blue dashers (Pachydiplax longipennis) mating. The blue male is on top while his female drapes her body beneath him.

… or doing other things that dragonflies normally do.

For the last three years, I have been on a quest to get a good photo of a dragonfly in flight and Sweetwater is an excellent place to pursue this goal.  There are so very many dragonflies I can pretty much point my camera in any direction and find a flying dragonfly.  But photographing them is hard!  You have to get to know their flight patterns, just sit and watch for a while, if you have any hope of getting a decent shot.  You usually have to pan as they fly by.  Focusing is an absolutely nightmare because the dragonfly changes position so rapidly that it’s hard to keep up.  I’ve taken thousands of photos of flying dragonflies at Sweetwater and I’ve gotten a handful that I’m reasonably happy with.  The black saddlebags pictured above is decent.  Could be better, but could be worse.  I’ve got a lot of photos like that.

On this last trip, however, a storm started moving in right when I was about to give up for the day and head home.  It got a little cloudy and cooled off a bit, so more dragonflies started flying.  One of the species that appeared was the gorgeous blue-eyed darner, Rhionaeschna multicolor.  As luck would have it, about 10 of them started flying a few feet from where I was standing, so I decided to snap a few more photos before leaving.  I’m so happy I did!  I got several shots that I was actually happy with, including this one: 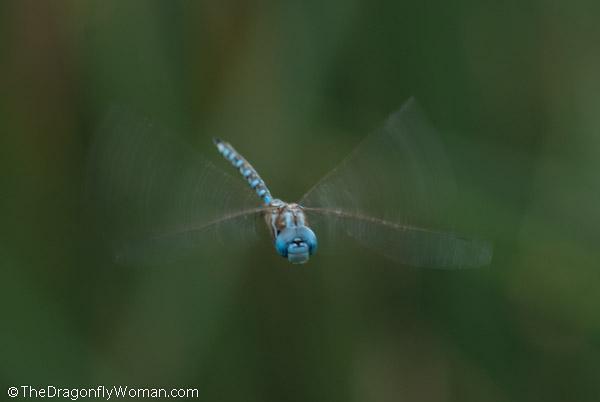 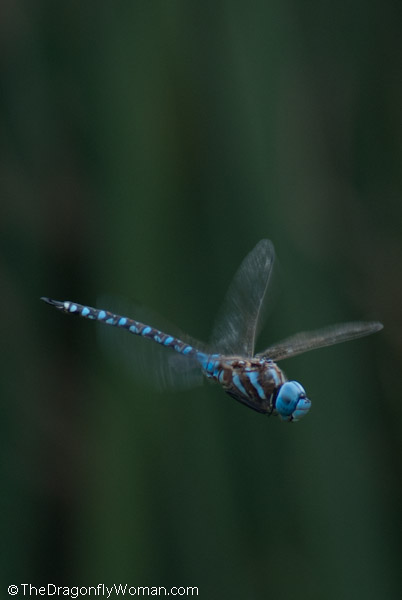 I’m happy with both photos because the dragonflies fill up most of the frame and they’re much more in focus than my usual attempts.  But this one, well…  This one made me squeal just a little because I was so incredibly happy to finally get one good shot of a dragonfly in flight: 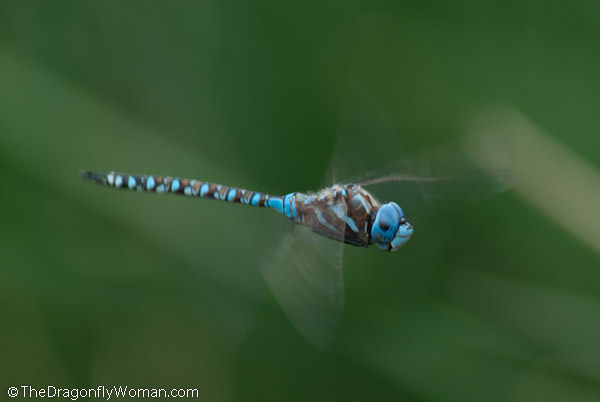 The whole head is perfectly in focus!  I was beyond thrilled to get this shot.  It’s not the best dragonfly-in-flight shot ever, but I feel like I finally got the shot I’ve been trying for.  And now that I accomplished that photographic goal, I have a new one: getting a good shot of a flying dragonfly where the wings are in focus too!

So, Sweetwater was kinda stinky (as usual) and really hot until the clouds rolled in, but I was very happy I went anyway.  Getting those darner shots was a great way to end a weekend filled with Big Bugs and the Gilbert Riparian Preserve.  As I headed out to my car, I came across one last dragonfly.  I’ll leave you with that: 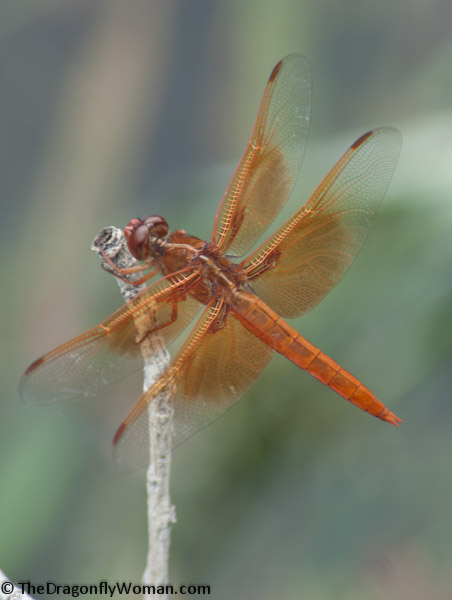 4 thoughts on “A Late Summer Visit to Sweetwater Wetlands”