I participated in a fantastic event a few weekends ago, the Arizona Insect Festival. Hosted by the Department of Entomology at the University of Arizona, the event harnessed the enthusiasm and knowledge of the many people in the Tucson area who work with insects and brought them all together to provide a fun an educational event for the public. If you read my brief post advertising the event, you know that there were 20 different booths/activities planned for the event – and something for everyone. I was really excited about the event and was thrilled that I was going to be a part of it. But it was so much better than I’d even imagined! Let me walk you through my day so you can see just how amazing the festival was.

I woke up at 5:30 the morning of the festival.  This was the worst part of the day.  I am a crazy night owl.  I’ve been staying up until 5AM recently.  I got 2 hours of sleep the night before the festival.  Still, I voluntarily dragged my butt out of bed, downed a few cups of coffee, and drove to campus.  I needed to get the aquatic insects I was contributing to the insect zoo organized before I started helping with setup at 7AM.  I somehow made it to campus without getting into a car accident and spent 20 minutes packing up my bugs before hauling them out to the festival tents.  It looked so quiet and peaceful at first:

I plopped my bugs down on the mall’s stage and then headed back inside to help.  Over the next hour, I changed into my official festival t-shirt, hung posters on the backs of the tents, and helped my fellow Insect Zoo peeps get our 2-tent display set up.  8AM arrived and everything was still a little disheveled and some things were still being set up.  But there were a fair number of people there!  People started wandering into the Insect Zoo a little before 8AM, though not very many at first:

And hour later, however, things were very different!

There were so many people!  We had a very steady stream coming into the tent – and rows and rows of people waiting to get in.  Sometimes people had to shove their way through to get to where they could see the bugs in the zoo, wading through people 10 deep just to hold a water scorpion… 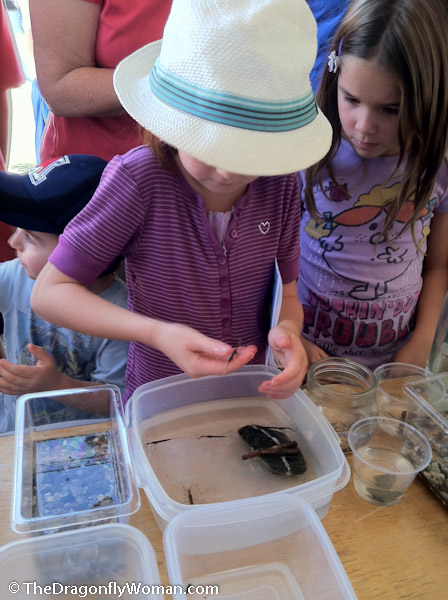 … or a horse lubber grasshopper.  The whole time, I was crammed right up against the wall of the tent in this tiny space behind the table, but people were so excited to see, hold, and learn about aquatic insects that it was worth it!  We had several different aquatics for visitors to look at before they visited a variety of terrestrial insects further down the tent.  And people kept coming and kept coming.  It was a little insane!

I talked to several hundred people.  I was also the person mostly in charge of stamping the spot for the Insect Zoo on the kids’ festival booth checklist, so I had a fairly steady stream of papers thrust at me, sometimes by people reaching their arms in over 3 or 4 people because they couldn’t get any closer to the tent.  And more people came and I talked to more people.  At 10AM, I realized that I had stood in a 2 foot by 2 foot space, smashed against the wall of the tent for two whole hours.  I was hot and uncomfortable, so I decided to tour the rest of the festival.  I escaped out the back of the tent, stretched my arms out as far as I could just because I could, and then plunged into the fray on the other side of the tables.  This is what it looked like: 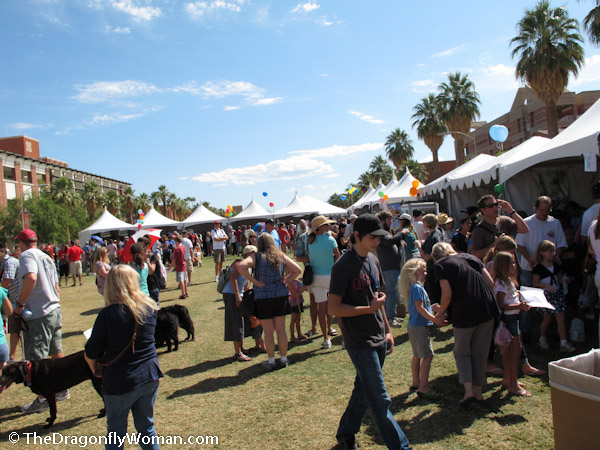 I should have known that it was going to be insanely crowded outside the tent considering what I’d seen from behind my table, but I wasn’t quite prepared for what I saw.  The place was packed!  But I was determined to see the other booths while I was out on the lam and attempted to see the social insect booth a few tents down.  No go.  There were too many people for me to get in!  Same deal with the Meet the Beetles booth and the Life in Miniature booths.  Basically, everywhere I turned there were people learning about bugs, enjoying themselves, holding live insects they might never have experienced otherwise.  I was a little sad I didn’t get to see what everyone else had come up with for their booths, but I was also so thrilled that SO many people were there and apparently really excited about what they were seeing.  The crowd was well beyond my expectations, and I think that was a good thing.

The only booth I could cram into was the decomposers booth.  It consisted of the decomposer box that we used when I TAed Insect Discovery in the spring, so I’d seen it all before, but it was great fun to see kids playing in the dirt again:

They also had the hissing cockroaches out for the kids to hold: 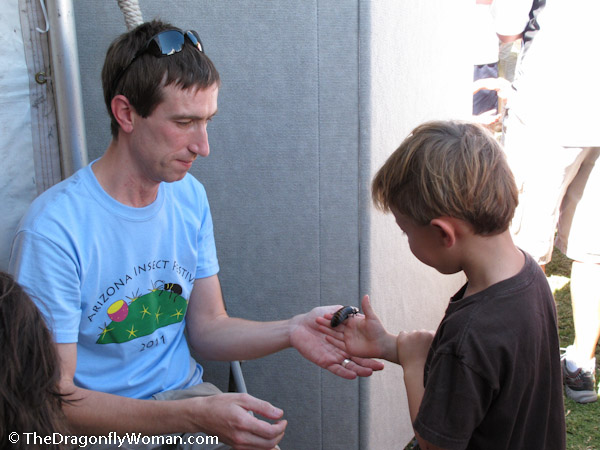 The decomposer booth was partly staffed by some of the Insect Discovery preceptors I supervised last semester, so it was nice to say hi before moving on.  I wandered around to the other booths, but was unable to get into the edible insects booth (I was actually going to try something!)…

… where kids were making their own insects out of clay, pipe cleaners, and other standard children’s craft supplies.  Because I didn’t want to push people out of the way to get into the booths myself, I made the circuit in about 30 minutes, getting just a glimpse of most tents as I held my camera high over my head in an attempt to actually see something through the crowds.  I somehow completely missed the Insect Olympics, where kids were imitating dung beetles and rolling huge “dung balls” (big blue balls) and racing hissing cockroaches.  I came across several friends in the crowd along the way, former classmates or friends who just like bugs, else it would have taken me less than 30 minutes to see what I could of the booths.  But when I got back to the Insect Zoo tent, I heard several people talking about how it was taking 2 hours to see everything – if you actually waited your turn and got to see everything.  I thought that was pretty awesome!  People were spending two whole hours learning about and interacting with bugs!

I couldn’t get back into my spot in the corner when I returned to my booth, so I helped out (less successfully) on the terrestrial insect side of things.  Lots of people were in love with the big, showy moth caterpillar:

It was fun watching people interact with the horse lubbers too:

I haven’t worked with terrestrial insects at an outreach event for so long that it was a nice change of pace.  For the last hour and a half of the festival, I talked to several hundred more people, showed off the caterpillars and mole crickets to visitors, and was filmed by a news reporter as I showed off the queen caterpillar to a kid.  And then, a mere 4 hours after it started, the festival was over!  It was time to pack up and head home!

According to the news report on TV that night (I was on it!), 5000 people attended the Arizona Insect Festival that day.  Mind you, the festival ran from 8AM till noon, so that was 5000 people in four hours!  I consider that a huge success!  I haven’t heard whether this is supposed to become an annual thing or not, but I really hope it does.  It was hugely successful, a ton of fun to participate in, and we spread the bug love to thousands of people.  And, I got a free t-shirt.  That alone was worth waking up at 5:30AM, right?  :)

If you are interested in reading more about the event, Margarethe Brummermann wrote a lovely post about the festival on her Arizona Beetles, Bugs, Birds, and More blog.  Also, the leader of the event, Dr. Wendy Moore, developed a brief narrated slideshow of the event with the help of UA News and posted a great gallery of photos taken by several people who either participated in or attended the festival.  There are some really fun photos so it’s worth a look!

Unless otherwise stated, all text, images, and video are copyright ©TheDragonflyWoman.com