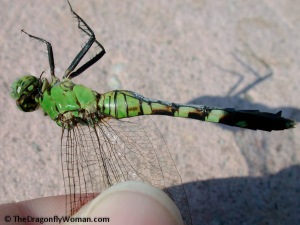 Yesterday I discussed a paper that looked into an interesting dragonfly behavior called accompanying wherein a dragonfly (or small group of dragonflies) follows a large, slow-moving animal because they stir up the little flying insects dragonflies like to eat.  Today I want to talk about something even more bizarre, a sort of extreme accompanying behavior that three people over the last year have asked me about.  I’ve never heard of this behavior before and I haven’t been able to find anything in the literature (though knowing the dragonfly literature, there might be some little nugget of information about this hidden in some completely unrelated publication), but I find it intriguing and wanted to share.  Let me lay out the three stories.

A woman in the US wrote to me last summer to ask why the dragonflies in her area were always flying toward her.  As she described it, dragonflies that were all the way across the yard would fly directly to her and hover right in front of her, even if she wasn’t moving around.  Some of the dragonflies had even come into contact with her, either flying into her face or landing on her.  It had happened so many times that her friends had started to comment about how odd it was that, even if several people were sitting on the patio together, the dragonflies would come straight to her and either hover near her or fly right into her while completely ignoring everyone else.

I thought this story was a little odd, but I couldn’t explain it.  In the back of my mind I thought that, because she didn’t like dragonflies, there was a possibility that she was mistaking a simple accompanying behavior for something more sinister.  (It happens.)  I told her about the accompanying behavior and she told me she thought her experience was something more.  So I told her I’d keep any eye out for information about what was happening and would tell her if I learned anything.  I looked around a bit for more information about this behavior and couldn’t find any, so I thought that was that.

At least it was for a while, because then I heard from person #2, another woman in the US who told me a story very similar to the first, except this woman had lots of dragonflies landing on her too.  I didn’t get as many details from the second woman, but it struck me as odd that I’d now heard two similar stories about dragonflies getting really close to specific people.  Dragonflies don’t usually come near people like that, so it was definitely a strange behavior.

And then a few months later, I heard from a third person.  This time it was a man from Canada with dragonflies coming toward him and landing on him like woman number two.  However, the dragonflies weren’t leaving after they landed and would remain attached to his shirt.  And they’d stay for a long time, becoming lethargic enough for him to actually pick them up and move them with his hands.  If he pulled his shirt off or pulled the dragonflies off his shirt, he’d later find the dragonflies dead.  This had started at a summer camp when he was young (five dragonflies became attached to his shirt and he didn’t notice them until some other people commented about his “passengers”) and has continued for several years.  Though he’s not scared of them, he now avoids going near dragonflies entirely, darting away from them as most people do when wasps come near, to avoid further incidents.  The man told me that he’d changed soaps, shampoos, laundry detergents, etc. many times over the years and didn’t think they were attracted to any cleaning products he used.

Now I’ll admit that I wasn’t sure about the first story.  After all, the woman admitted that she was scared of dragonflies, so it was reasonable to think that she might have blown a simple behavior out of proportion.  Still, I was struck by the notion that these dragonflies were actually getting close enough to touch her because that’s very unusual.  When I got the second story, I was a little less certain that the first woman was reading too much into the dragonfly behaviors she was observing and started to think there might really be something to it.  But now I’ve got three stories about people who have had dragonflies fly right up to them and land on them, three people in very different regions all experiencing a sort of ultra-accompanying behavior where the dragonflies seem to actually be attracted to these people.

Caught this damselfly when it landed on me.

I honestly have no idea what is happening, but three separate reports of similar behaviors make me think this might be some strange behavior that dragonflies very occasionally do.  But what are the dragonflies responding to?  And why do they only exhibit this behavior around a tiny handful of people?  I would have thought that maybe they were responding to soaps or some other scent, but the one man had explicitly stated that he’d changed his soaps several times over the years he’d observed the behavior.  It’s possible, though perhaps unlikely, that these people themselves are giving off some sort of unusual scent that the dragonflies are attracted to.  Alternatively, other small insects might be attracted to these people for one reason or another and those small insects might attract the dragonflies.  Mosquitoes are known to harass some people more than others based on the specific scents they give off, so it’s not outside the realm of possibilities.  But none of these seem like satisfying explanations to me  and don’t explain why the dragonflies would land on the people and sit there for any length of time.  Very strange.  Very strange indeed!

Now I’m curious about this behavior, but considering I’ve only heard three stories out of the nearly 3000 dragonfly swarms reports I’ve received, I have a feeling I’m never going to figure out the answer.  So, if you or anyone you know has ever had this sort of experience with dragonflies, please share your stories!  I’d like to figure out how widespread this behavior is and see if I can’t find some more commonalities between the people who have witnessed this behavior!  This scientist really wants an answer…

So many people have commented about this post since I first wrote it! I still don’t know what’s going on with this, but I still read all the comments. I can’t respond to every one anymore as I get so very many, but please feel free to leave your story in the comments below. That way other readers can hear your story – and I’ll still see it, even if I don’t respond. Maybe someday your stories will help me explain what’s going on!

431 thoughts on “A Bizarre Dragonfly Behavior”