Insects first evolved on land, so the first insects were adapted for terrestrial life.  Think about that for a moment, then consider the kinds of changes an insect had to undergo to transition from land to water.   The first insects to colonize freshwater were used to moving on land, finding food on land, and breathing on land, so they probably had a hard time living in water at the beginning.  Over time, these insects began to adapt to their new watery home.  They developed new ways to breathe, new ways to move, new ways to find mates, and new tastes in food.  Some of these adaptations are pretty wild, so I’m going to talk about five of them here today.

Whirligig beetles are beetles that live at the surface of water, half in the water and half out.  Because they aren’t entirely in the water nor entirely out, they have special visual needs – they have to be able to see well in water and in air to hunt and avoid predators.  Insects often have little light sensing simple eyes on the tops of their heads called ocelli, but that apparently wasn’t good enough for the whirligigs.  Instead, they split their eyes in half!  Now one set of eyes sits above the water on top of the head and the other set looks down into the water from the bottom of the head.  Four eyed beetles!  How cool is that? 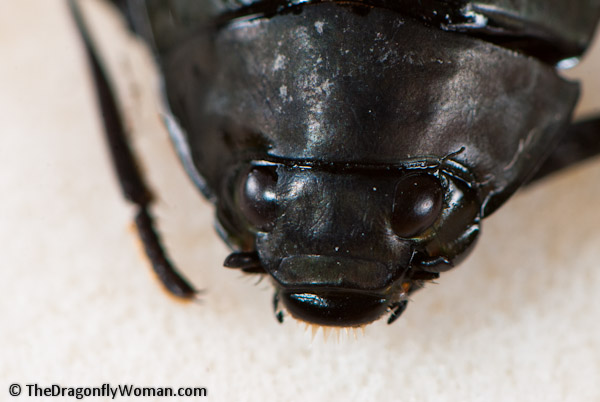 Rat tailed maggots are the aquatic larvae of a few species of hover fly.  You find them in the muck at the bottom of ponds, often in rather nasty water.  If you know much about oxygen levels in ponds, you know that the muck tends to have very low oxygen, especially when polluted waters are involved, so there’s not a whole lot available for rat tailed maggots to breathe.  Not a problem!  They developed a “rat tail,” a long, telescopic respiratory tube that sticks off their back ends.  It works rather like a snorkel so, by stretching it up to the surface, the maggots can breathe continuously in spite of living in oxygen poor environments.  It makes them look a little gross, but hey: it works.

I discussed several aquatic insects that have suction cups or suction cup-shaped bodies a while back.  Aquatic insects also have a variety of other adaptations that help them stay in one place in fast flowing streams.  Black fly larvae tend to congregate in large groups on rocks out in the high flow areas of streams, but every now and again they’re going to get knocked off their rock as an animal (sometimes a fisherman or an aquatic entomologist) wanders out into the stream.  But black flies don’t wash downstream when they’re dislodged!  Instead they float downstream a few inches and then abruptly stop, wavering about as the stream flows around them.  A few minutes later, they’re all back on the rock like nothing even happened.  They’re able to do this because black flies have developed silk tethers to anchor themselves to their rocks!  Under normal conditions, they latch the hooks on their back ends into a silk pad they attach to the rock.  When something disturbs them, they quickly release their hold on the silk pad and let out a length of silk.  When the danger passes, they retract the silk thread and return to their regular positions on the rocks.  It’s a really impressive adaptation, and an incredibly important one for these insects.

Most aquatic true bugs in the order Hemiptera are predators, feeding on other insects, various invertebrates, and sometimes even vertebrates.  The water boatmen are conspicuously vegetarian exceptions.  These insects eat algae, but it’s a little hard to do when you’re an insect with piercing-sucking mouthparts.  So, the water boatmen front legs have undergone adaptation to help: their front legs end in big, spoon-shaped scoops that they can use to scrape algae off rocks, plants, the bottom of ponds and streams, etc.  Then they can stick their beaks into the algae feast in their scoops, inject the algaes with digestive compounds, and suck up their delicious algae soups with ease! 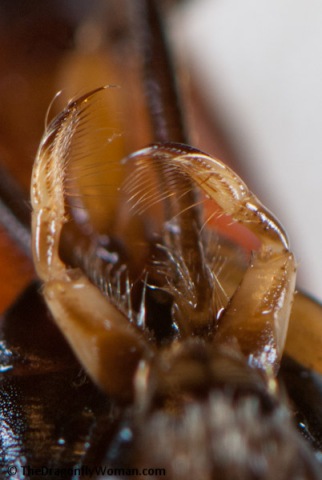 Water strider mid and hind legs. Notice that the claws are not at the very tips of the legs, but recessed back from the tip a little.