I’m taking a break in the Science Sunday posts this week to share a few late breaking dragonfly swarm tidbits.  A Swarm Sunday!  In the middle of the winter!  I’m excited.  Are you excited?  :)

First, the dragonfly swarm activity (at least based on the reports that I get from mostly English-speaking people) seems to be heaviest over Central America recently.  A few weeks after the end of the US and Canadian seasons, I started to get reports from Central America.  I can’t say for sure that the swarms that left the US mainland in October ended up in Belize, the Yucatan Peninsula, and Honduras a few weeks later, but…  There might be a connection between the two.  Mark recapture studies or radio tracker studies would be necessary to confirm this, but there are published accounts of dragonflies flying out over the water in the southern US during the migration season and other scientists have hypothesized that they are likely to end up somewhere in Central America.  It will be interesting to see if this pattern of US migration followed by a surge in dragonfly activity in Central America continues over the next few years as this is the second year I’ve observed the pattern.  Dare I hope that my data might even suggest possible places where these dragonflies are overwintering?  That would be incredibly exciting!

I wanted to highlight one recent Central American swarm.  My aunt rented a condo in Costa Rica this month and she invited nearly her whole family down to visit while she was there.  My sister went for a week, then sent me a video last weekend, out of the blue, that she’d taken of a massive dragonfly swarm that had formed right over the condo.  It had lasted three days and likely involved millions of dragonflies!  I was seriously jealous, especially considering I was the only person invited who wasn’t able to go to Costa Rica and missed out an enormous dragonfly swarm on the beach too.  But then my aunt’s brother-in-law (who’s renting a nearby condo) sent me photos of the swarm yesterday that made me swoon a little.  Check them out: 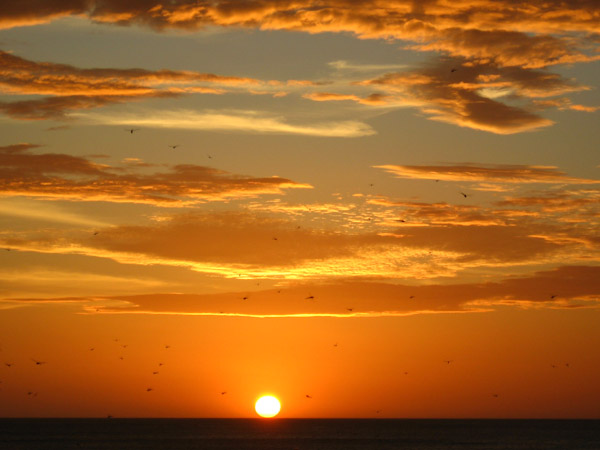 Sunset.  Beach.  Ocean.  Dragonflies!  Oh, I wish I’d been able to see this one!  Look how beautiful it was!  (Granted, if I had been there I would have spent the entire three days making scientific observations, but I’m an entomologist with an interest in natural history and behavior.  That’s what we do!)  I love these photos beyond their aesthetic appeal though.  For one, the dragonflies are so much more distinct than in most of the photos I’ve seen of this behavior – or even taken myself!  This is an incredibly difficult behavior to capture photographically because there is so much movement and so much depth.  You can only see silhouettes in these photos, but you can tell without a doubt that they’re dragonflies.  I also like that the photos are taken at sunset as that is the time of day this behavior is most commonly observed.  Most of the photos people have sent me understandably show daytime swarms.  Sunset swarms are much, much more common though, so it’s nice to see a few shots of a swarm in a more typical setting.  These photos are thus an excellent representation of the behavior.  Exciting!

The Australian swarming season should be starting up soon too.  Last year, I got several reports in February and March, so I’m hoping to get a repeat of that.  Granted, there was a ton of flooding in Australia last year, which may have led to the surge in dragonflies reported in many Australian news reports (yes, I watch Australian news reports about dragonflies.  Doesn’t everyone?) as well as the boom in swarming activity/reports.  It’s going to be interesting to see what happens this year!

It’s exciting to see data flow in even during the northern hemisphere’s winter.  Reminds me that the next US dragonfly swarming season is just 5 months away.  I can’t wait to see what happens next!