With a blog called The Dragonfly Woman, you might assume that I like odonates.  And I do!  I think they’re amazing, beautiful creatures that deserve far more attention than they actually get.  I know I’ve talked about why I think dragonflies are the best insects  before, but today I’m going to share 5 more fun facts about dragonflies to add a little spice to your Friday.

1.  Damselfly nymphs have 3 leaf-like gills at the tip of the abdomen.  These gills are one of the distinguishing characteristics of damselflies in fact.  They’re thought to help damselfly nymphs breathe more effectively underwater, but…  Scientists have removed all the gills from damselfly nymphs to see how it impacts their development and growth and… surprisingly little changes!  It’s possible that these “gills” are actually used for something else.  One hypothesis: they wave the gills around in aggressive encounters with other damselfly nymphs, so they might actually play a bigger role in conflict management than respiration.  More research might help us understand the role these structures play in greater detail.  More odonate research = fun!

2.  Odonates go through a non-reproductive maturation stage after they molt into adults.  In many insect species, newly emerged adults can get right to the important things: finding mates and getting busy making offspring.  Most odonates have to wait at least a few days, sometimes even a few weeks, before they can actually start mating.  This is called the teneral stage.  Teneral odonates are often a different color than fully mature adults, especially in males, so you can often tell whether a dragonfly or damselfly is able to produce offspring just by looking at it.  This can make identifying a dragonfly a bit more difficult as it increases the number of possible colors any one species exhibits, but it’s also nice to be able to easily determine whether a dragonfly is teneral or not.

3.  Some dragonflies use puddles or rain pools inside plants or trees to reproduce.  Dragonflies in temperate regions such as the US typically spend more of their life as nymphs than as adults, a year or two as nymphs and less than a month as adults.  The opposite is often true in tropical regions close to the equator where some species can transform from an egg to an adult in a few short weeks. Nymphal developmental times in these regions can be short enough that puddles, or even little pools of water collected in the folds of plants during rains, are great places to raise the kids.  Imagine spending your entire childhood in a single tree hole! 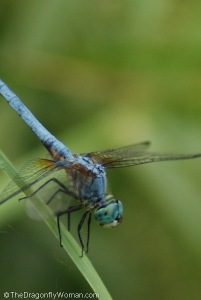 4.  Some dragonflies lay eggs in water that is saltier than the ocean.  There are very, very few insects that live in the ocean.  Several ideas have been proposed to explain why this might be (I’m going to write a post about it sometime), but one of the obvious reasons is that ocean water is salty and some insects might not be able to handle it.  That doesn’t seem to be a problem for some dragonflies though!  Some species, such as the seaside dragonlet (Erythrodiplax berenicei) can successfully produce offspring in water many times saltier than the ocean.  Reproducing in brackish water.  How cool is that?? 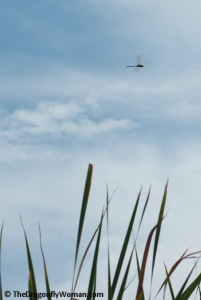 5.  There are a number of dragonfly sanctuaries in Japan that were established specifically to protect dragonflies.  Unlike most places in the world, dragonflies are an important part of Japanese culture and have a lot of positive symbolism attached to their appearance in the spring.  As such, dragonflies enjoy protections in Japan that few other countries provide.  Japan is home to several wildlife sanctuaries created solely to provide essential habitat for dragonflies so that they can continue to survive in the face of increasing urbanization.  I hope that other countries, including my own, will follow Japan’s lead in the future as water resources become more scarce and dragonfly habitats are eliminated.  Dragonflies are amazing, and they deserve some protection as far as I’m concerned!

Yep, dragonflies are really cool insects.  They have strange structures and strange behaviors and live in strange places.  They’re quite beautiful too!  I know there are people who don’t appreciate dragonflies in the world, but I don’t always understand those people.  What’s not to love?  As the sticker on the back of my car says, dragonflies rock!