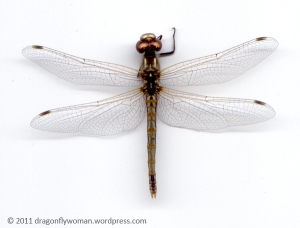 If there’s one thing that I find particularly appealing about Japan (and other Asian cultures), it’s the attitude the Japanese have toward dragonflies and damselflies.  In contrast to most Western cultures, cultures that have typically feared and hated dragonflies (look for a whole post about this soon!), the Japanese have a much more positive attitude about their odonates.  Dragonflies are seen as harbingers of life and prosperity, birth and renewal, happiness and strength.  Dragonflies inspire art, literature, textiles, and design.  They have also inspired many Japanese poets, especially those who compose haiku.  I love the neat, short little dragonfly haiku!  They are so happy and full of natural imagery that I find calming and good for the soul.  Last week was a busy one for me, so I’m going to kick off this week right by sharing some lovely dragonfly haiku.  Let’s all ease into the new work week together with a warm cup of green tea and some haiku, shall we?

But first, a few things to note about traditional Japanese haiku.  This should be obvious, but the standard form of the haiku (three lines with 5-7-5 short syllables) doesn’t always translate into the proper number of syllables in English.  That doesn’t diminish the essence of the poem as far as I’m concerned, but it explains why some Japanese haiku don’t fit the haiku form in English at all.  There were also rules regarding appropriate subject matter for haiku.  They were supposed to conjure up memories or feelings and usually featured natural subjects.  They were also supposed to include a word or phrase that indicated a season.  Dragonflies were popular subjects for haiku because they were associated with the spring and the fall and thus could act as the seasonal element in many poems.  One example seems to indicate the fall and the harvest:

This one is a lot more obvious about the season:

The beginning of autumn
decided by
the red dragonfly.
(By Shirao)

As is this one:

Dyed he is with the
Color of Autumnal days,
O red dragonfly.
(by Bakusui)

Sometimes the poems evoke the beauty and wonder of both dragonflies and nature more than a specific season.  A good example:

The dragonfly!
Distant mountains reflected
in his eyes.
(by Issa)

Other Japanese haiku say something about the dragonflies themselves.  This haiku seems to conjure up images of a species that flies at dusk (prime time for swarming and other feeding activities!):

Dance, O dragonflies,
In your world
of the setting sun.
(poet unknown)

Combat between male dragonflies is common around ponds and streams as each tries to attract mates by defending territories.  This behavior has been immortalized as haiku:

Meeting in flight,
how wonderfully do the dragonflies
glance away from each other!
(poet unknown)

Can’t you just feel the dragonflies coming together and sizing each other up before one male gives way to the stronger male?  It certainly conjures up this image for me!

Catching dragonflies has been a very popular activity for Japanese children for hundreds of years.  (A friend once sent me an article about a traditional method of capturing dragonflies with nothing but a short thread tied to two small rocks!).  The popularity of this activity and the joy it brings the participants are clear in these two poems:

Catching dragonflies!
I wonder where he
has gone today.
(by Chiyo of Kaga)

The naked child has been
catching dragonflies at the road crossing,
heedless of the noon sun!
(poet unknown)

And last, I give you an example of a haiku that shows how much haiku writers appreciate the dragonfly:

have you come
to save us haiku poets?
red dragonfly
(by Issa)

Ahhh…  What a lovely quiet celebration of dragonflies!  There’s nothing quite like a dragonfly haiku to help you appreciate the natural world.  But I think I need to contribute something original here too, so I wrote my own haiku.  Let’s see if you can figure out the behavior and season is conjures:

The subject should be quite obvious to readers who have followed my little blog here for a while!

Anyone else want to contribute a dragonfly haiku?  Or a haiku about another insect?  I’d love to hear what the rest of you can come up with, so feel free to add your haiku as comments below.  Have a great week everyone!