This is an insect blog.  Nearly every post I’ve ever done has related to insects somehow.  I do that on purpose because I like insects.  I like them a lot.  Some might even say I like them too much.  But ultimately, entomologists are biologists and biologists are scientists and most of us have interests in fields of science outside of entomology.  I have quite a few in fact, something that those of you who follow me on Twitter have probably noticed.  For today’s Friday 5, I’m going to do something a little different and share my five favorite science books that have little or nothing to do with insects.  I think these books are excellent examples of great science writing and I enthusiastically recommend any of these to people who want to read a good scientific story.  In no particular order, they are… 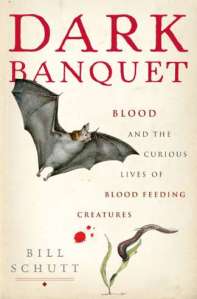 As my Tweeps have probably noticed, I have a thing for bats.  I can’t even explain why I like them so much – I just do.  Honestly, I bought this book because of the bat on the cover (I absolutely judge books by their covers and this policy has served me well!) and the fact that the author is a bona fide bat biologist.  But, oh!  It’s so much more than a book about bats!  You’ll learn all about mosquitoes and horse flies and leeches and how blood feeding animals are able to prevent being detected as they feed and how they keep blood flowing when they find a tasty animal to feed on.  This is also the only book on today’s list that’s written by an actual scientist rather than a science writer.  I read a lot of books written by scientists, but few reach the level of accessibility and entertainment that this one does.  And did I mention that there are bats?  :)

This book is partly the story of a science writer who decided that going to the Smithsonian Tropical Research Institute to write a book was a good idea, and the result is absolutely marvelous. Royte’s approach was rather unique.  She wanted to write about science and scientists, so she went to Panama’s Barro Colorado Island and offered her services as a free field hand.  Living and eating with scientists, going to their daily meetings, and working with them in the field gave her a rather unique insight into how biological research is actually done. This book describes the effort and long hours biologists put into their research, the highs and lows of biological field work, and the moments of pure elation that biologists experience, and it does so in a beautifully written, engrossing way.  The book celebrates biology in all its messy, frustrating, and thrilling glory.  Read it!

I can’t even remember why I bought this book, but I’m so happy I did!  Dava Sobel is a phenomenal science writer and it was this book that introduced me to her work.  The story tells the well-worn tale of Galileo and his groundbreaking astronomical discoveries for the thousandth time, but Sobel gives the story a unique voice: Galileo’s elder daughter, a Catholic nun.  Galileo and his daughter were very close and had a sort of symbiotic relationship throughout Galileo’s life, the father supporting his child through patronage of her convent and bringing her news of the outside world while she supported and encouraged her father’s work in astronomy.  If I didn’t know it was a true story, based on a large collection of letters found after Galileo’s death, I would have thought this was historical fiction.  And while you’re happily reading through a truly good yarn, you learn about how Galileo came up with his ideas, the work he did in astronomy, and his eventual incarceration and defamation at the hands of the Catholic church.  A fabulous tale about an extraordinary scientist who changed the world.

The Species Seekers by Richard Conniff

I am fascinated by the Victorian age and the huge influence the natural historians of that time had on our understanding of modern biology.  This book is about the early species seekers, the scientists and ordinary people who traveled the world, sometimes at great risk of death or dismemberment, to catalog, collect, and describe species in the far reaches of the globe.  It’s an engaging tale, one full of odd characters, bitter rivalries, triumphs, and disappointments (as most books about biologists should!) that sucks you in and makes you want to keep turning the page.  It’s also fascinating to read about how the discovery of the gorilla shook our understanding of what it meant to be human and how Darwin and Wallace’s evolutionary ideas changed the world.  This is a really well written book about an extraordinary time in science history, and one I think everyone should read.

The Secret Life of Lobsters by Trevor Corson

I’ve actually mentioned this book before, but I love it so much that I’m going to talk about it again.  This, to me, is one of the best examples of popular science writing on the market.  It seamlessly blends stories about lobster fishermen and the scientists who study lobster biology with stories about the lobsters themselves.  Lobsters are surprisingly interesting animals, and lobster fisherman/biologists are too.  This is a great read!  I know I’m going to sound very nerdy for saying so, but I had a hard time putting this one down.  It’s that good!

I still have many, many more science books I’d like to read in my lifetime, so I’m sure my favorites will change over time, but any of the books above make for excellent reading for anyone with an interest in biology or science in general.  Would anyone else like to recommend a popular science book?  There are so many great books out there!  I’d love to get a few more recommendations, so leave comments below!