Well, Science Sunday ended up getting pushed to Monday, but that’s okay.  It happens!  But today I’m going to share a fascinatingly simple study with you about caddisflies, so I hope it was worth the wait.

I haven’t talked about caddisflies all that much on my blog yet, but I really should.  They are incredibly interesting little insects and hugely diverse as far as aquatic insects go.  Caddisflies fly around on land as adults and look like little bland moths: 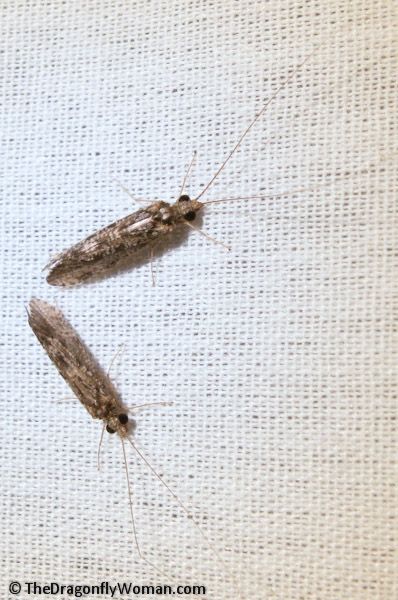 Their order name, Trichoptera, means hairy wings, and if you look closely at the wings you’ll understand why: rather than scales, as you see in their close relatives the butterflies and moths, caddisfly wings are covered in hair.  Their common name, caddisfly, is based on a peculiar structure that the aquatic larvae and pupae use, the case.  Not all caddisflies build cases, but those that do build them using silk that they produce and materials they gather from the stream such as algae, pebbles/sand, leaf bits, pine needles, small pieces of wood, etc.  There are a huge variety of cases, many of which are species specific so that you can identify the species based solely on the case.  Others are less distinct, but regardless of the structure of the case, they tend to be big, bulky, heavy things that are much larger than the larvae carrying them.

Over the years, researchers have proposed a variety of purposes for caddisfly cases.  Some are likely helping the caddisfly breathe by stirring the water around the larva, allowing it to collect oxygen from the water via gills that run along the abdomen.  Cases may protect some species from predation as fish and other aquatic predators are less likely to eat something that looks like a pile of rocks or leaves than a soft, squishy insect.  Still other caddisflies may use their cases to weigh them down, causing them to sink to the bottom so that they can move about fast flowing streams with less risk of being swept downstream.  Each species may use its case for a slightly different purpose, or even more than one.

One species of caddisfly, Dicosmoecus  gilvipes, builds a case from silk and plant bits, adding small pebbles as they get older.  The first through fourth instars also attach needles from Douglas fir to their cases (the fifth and last instar does not), attaching them near the top of the case so that they stick far out to either side: 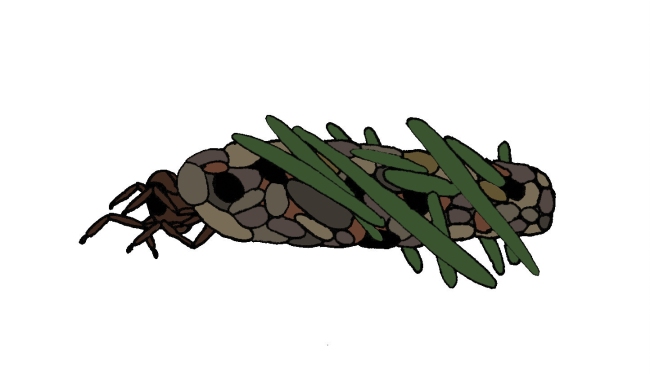 This is a rather peculiar arrangement of materials, so researchers Michael Limm and Mary Power wanted to figure out why those fir needle wings were so important.  They considered two hypotheses.  First, the wings might protect the larvae from predation.  Even if the little rocks didn’t discourage fish from eating the larvae, perhaps the pointy spikes sticking off the sides would.  Alternatively, the extensions could help stabilize the larva so that the larva would be less likely to tip over in areas of high flow in a stream.

To test these hypotheses, they did two simple experiments.  In the first, they released caddisfly larvae at the site where a stream flowed into a deep pooled area containing steelhead trout.  One person hid behind a boulder and released the larvae, which were swept into the pool.  A second person observed the fish and counted how many times each larva was approached by the fish, were “mouthed” by the fish, or eaten.  They did three treatments: caddisflies with the case intact, caddisflies with the douglas fir needles clipped off, and naked caddisflies that had been removed from the case prior to release.  In the second experiment, the researchers constructed a large rocking water tank that would roll the larvae over.  They placed a larva on the bottom of the tank and turned the machine on, then counted how many times each larvae rolled before it recovered its footing and how long this took.  They then compared the number of rolls and the time to recovery between caddisflies with cases intact and with the fir needles clipped off.  The team also measured the cases to determine how the width, length, mass, and center of mass changed with the addition of the fir needles.

The reseachers learned that the fir needles increased the width of the case by 410%, the length by 36%, and the weight by 24% and shifted the center of mass upward off the streambed.  They also learned that, while the steelhead readily consumed naked caddisflies, there was no difference in the number of approaches or the number of times the caddisflies were mouthed between the larvae with the extensions and those without.  Clearly the case alone was sufficient to prevent predation regardless of whether the extensions were present or not.

The results of the rocking tank were interesting though.  Larvae with the fir needle extensions rolled three times less than larvae without the extensions.  They also regained their footing more than three times faster with the extensions than without.  The cases might be providing other benefits to the larvae, but Limm and Power concluded that the function of the fir needles is to stabilize the larvae in areas of high flow.  Apparently it’s worth the extra effort of finding the fir needles and carrying around a much more unwieldy case if it means that you are more stable in the stream.

So, why does this matter?  According to calculations the authors did, the drag force required to tip a larva over is more than four times greater when the larva has the extensions than when it does not.  This means that the larvae can safely walk out into areas of the stream with flow up to two times faster without getting tipped over and washed downstream.  The extensions also help the larvae orient themselves so that they’re positioned parallel to the flow.  This decreases the chance of being swept away.  All of these benefits combined likely allow the larvae to wander out into areas of the stream where they would not otherwise be able to go.  Food limits the number of Dicosmoecus  gilvipes that can live in any particular stream, so by increasing their stability by the simple addition of a few Douglas fir needles, the larvae increase the area where they can forage for food in the stream, allowing more individuals to survive in any given area.  Pretty darned cool!

16 thoughts on “The Purpose of Caddisfly Case Extensions: A Case Study”