Writing my post Monday reminded me of how much I like caddisflies – and how little I write about them here on my blog.  Today I’m going to write about them again.  And because it’s Friday, it’s time for another Friday 5!

Caddisflies are incredibly important aquatic insects for many reasons.  They’re an essential part of many food webs, processing whole leaves into smaller particles that other organisms can consume, breaking down dead material, and acting as a food source for many larger aquatic animals such as fish and frogs.  From a water quality standpoint, they’re sensitive indicators of pollution and valuable when assessing the quality of streams.  They’re also a very diverse group of insects.  In some places you find several different species living together, each building its own style of case and performing various roles within the stream.  In one tiny area of a single stream, you might find big cases and little cases, cases made from leaves or wood or pine needles or rocks, sometimes even snail shells.  The variety can be quite impressive!

To demonstrate this diversity, I’d like to share 5 photos of caddisfly cases from a single river, the Little Colorado River of Arizona’s White Mountains.  These caddisflies were all collected on a single day from a small section of the river near Sheep’s Crossing, a pine wooded area (or at least until the Wallow Fire – not sure what it looks like now!) at fairly high elevation (over 9200 feet).  The water flows fast and cold, though there has been a lot of beaver activity the last few years that’s been transforming the area.  There could be even more – or different – caddisflies there now!

Many species of caddisfly make cases out of rocks.  This is one example:

Glossosomatid caddisflies are known as the saddle case making caddisflies because they make cases that are reminiscent of saddles.  The cases are constructed using silk with rocks attached.  On the top and sides, the caddisfly places large rocks from head to tail.  On the bottom, it uses smaller rocks and makes a much narrower band that wraps under the abdomen.  Think of how a saddle fits on a horse – the mental image is pretty good.  I find these out in the high flow areas of the stream, essentially glued into place on a rock.  Out in this part of the stream they can scrape the delicious algae off the rocks to their heart’s content!  There’s something about this family that I just love and they’ve become my favorite caddisfly group.

Limnephilidae is a very diverse family of caddisflies, but they tend to be rather large and often build their cases from rocks.  An example: 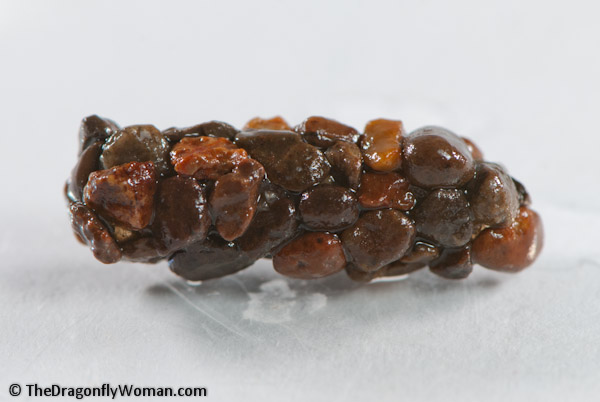 This case is sealed at both ends because the caddisfly has pupated inside.  It will dig its way out of the case when the adult emerges, and then leave the stream to spend its adult life on land.  I usually find these on the bottom of the stream in sandy or gravely areas within a few feet of the banks where they can chew up leaves and break them down into smaller pieces.  Their case is just a tube of silk with moderately sized pebbles attached.  Pretty simple really.  But some cases n this family are much more complex.  Case in point…

This case is from another limnephilid species:

Rather than using all rocks, these caddisflies build a rock case and then wrap at least the bottom half with leaves.  This is a much more complex case design as the caddisflies have to find both the right size of rocks and stitch them all together, but then they have to find a second completely different material to finish the job.  Pretty cool!  I think these look a little like a sushi handroll.  :)

Several species of caddisflies make cases that incorporate pieces of wood.  Some even make cases entirely from wood like this one:

This case is from a caddisfly in the family Lepidostomatidae, a family with only two genera in North America.  I find these larvae, often in very great numbers, near the banks where they break down stream detritus including dead leaves and dead fish.  This species is among nature’s recyclers and plays a very important role in the stream.  The fact that they wander around in fashionable wooden jackets makes them extra awesome.

Many caddisflies make their cases entirely from non-woody plant material.  One example is this brachycentrid larva:

I just love these little caddisfly neat freaks.  Check out the carefully arranged geometrical case!  Amazing.  If you hold the case with the opening toward you, those little bits of grass form a perfect little square.  These larvae tend to be tucked up in the crevices along the banks where they collect and eat little food particles floating around in the water (diatoms, bits of algae, etc).  I find a lot of them in very small sections of the bank too.  One scoop with my hand dandy soup strainer will often haul up 30 or 40 of these caddisflies!  I usually take two or three and put the rest back.  Otherwise my collection would be overrun with brachycentrids!

There are far more than 5 species in this river, but most of them make cases from these same types of materials because that’s what it available.  If you travel downstream just a mile, the beaver activity is much less and the deeper water flows faster, so you get several other species there, some that build very different cases than any of these.  I think it’s impressive that there are so many varieties of caddisfly in a single mile of river!  This is a seriously diverse group.

So, have I convinced you that caddisflies are amazing yet?  :)