I  am getting my Friday 5 post up a bit late today, but there’s a reason!  I knew I was going out today and was going to have an opportunity to take some photos, so I was hoping I’d get enough bug photos to post them here.  And I did!  My husband had surgery early last week and I’ve been trying to spend my mornings with him each day as he recovers.  He wanted to get out of the house for a while for the first time since he got home, so we went to the zoo and made our way through it very slowly.  Because we were really taking it easy, I had a lot of time to wander around and climb through bushes and whatnot looking for bugs.  Here’s some of what I came across on a beautiful, cool, spring day in southern Arizona!

I’ve seen a lot of the big, black carpenter bees that are all over Arizona, but today was the first time I’d ever seen these!  I believe this is Xylacopa varipuncta, the valley carpenter bee.  Apparently these are sexually dimorphic, with orange-brown males and black females.  That would make this one a male – and a beautiful male to boot!  Hope I see more of these in the future because I loved them.   There were 15 or 20 of them sucking nectar out of palo verde tree flowers and they were really fun to watch!

This is another thing I’ve never actually seen!  Somehow I’ve managed to miss out on some great insects in my life and this is one of them.  Lacewings belong to the order Neuroptera and have the long, pointed mouthparts typical of the larvae of the order.  They use those mouthparts to pierce prey insects, inject them with chemicals, and then eat them.  This little guy was chasing thrips, which were so small they barely seemed worth eating, but apparently they were tasty because the lacewing was actively hunting them the whole time I watched. 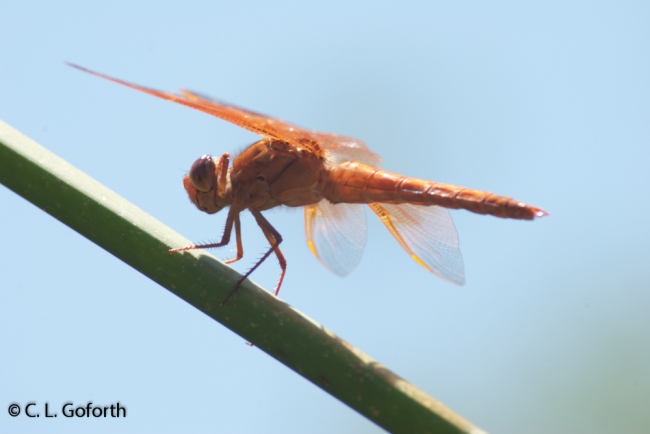 I’ve loved the same part of the zoo in my city as long as I can remember, a pond with a water wheel, lots of ducks, and flamingos.  As a kid I loved the water wheel and the grinding stones that went along with it, but now I like that area of the zoo because that’s where the dragonflies are!  Today I saw two dragonfly species and three damselflies, but I only got a good photo of the flame skimmer.  These are incredibly common in southern Arizona, but I love the colors on this species (Libellula saturata) so I never get sick of seeing them.

I saw this bee flying around and thought it looked enormous!  Thankfully moments later it landed inches from me so I was able to get a good look at it.  What I thought was a gigantic bee turned out to be a rather average bee carrying a big piece of leaf.  A leafcutter!  This bee was surely carrying this leaf fragment back to line her nest before she laid some eggs.  Adorable! 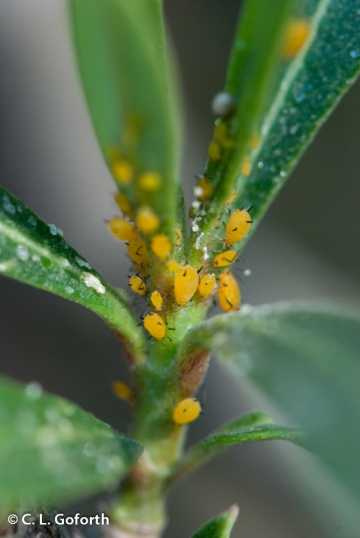 I am in love with these bright yellow aphids!  I always find them on toxic plants and these were no exception – oleander.  Apart from their incredible color, I also like them for an odd twitchy behavior they do.  I usually find them with their mouthparts inserted into the plant, but their whole bodies stick up into the air.  Then they swing their bodies in a 360° arc about their mouthparts every 10-20 seconds.  They don’t synchronize the behavior, so there’s always one or more swinging around by the mouthparts in a group.   It’s really odd, but fascinating too!  Someday I’m going to figure out why they do it.  If anyone happens to know, please leave a comment!

All in all, a great day!  Got to spend time with my husband out of the house, watched and photographed some great insects (and some of my other favorite animals such as capybaras, tapirs, and otters), and got some work done too.  Not a bad way to spend a day!