Last week NPR featured a pet store that caters to people interested in buying insects.  It happens to be in my hometown, so I was thrilled about the idea of going!  So, an entomologist friend and I made a trip there and I took a few photos.  I’m going to share some of the better ones (and mind you these were taken with my iPhone, so they’re not great) with you today to give you a sort of mini-tour of the shop for Friday 5!

I had the location of the pet store mapped out on MapQuest and knew exactly where to go to find the shop, but I’m very happy I did.  The shop was surprisingly poorly marked.  To be perfectly honest, I walked out of the shop without ever learning what the name of the place was!  My friend and I were also the only people there when we went, so it looked like it was closed.  Happily they were open, so we headed inside.

This is what you see when you walk into the store: 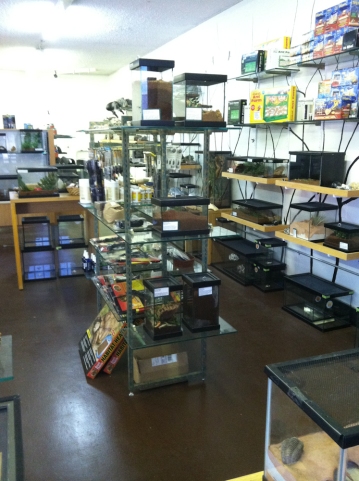 It’s pretty much exactly what they showed in the NPR story about the shop.  I got the feeling that the space was much, much larger than what you saw in the shop.  There was a big curtain that divided the storefront from the back area where I imagine a lot more things are stored (especially as the owner has a thriving online business in addition to the newer physical store), so the area we wandered though looking at the animals was not terribly large.  But there were some pretty amazing things there!  My favorite of the spiders was this one: 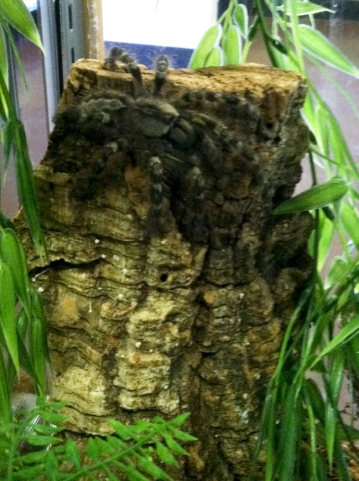 A really beautiful tarantula!  But apparently not one that you would want to hold as there was a sign on the cage saying this one has nasty venom.  I don’t hold tarantulas as the little hairs they kick off as a defensive mechanism bother my skin, but that sign would certainly deter me from ever wanting to touch this one.  It might be pretty, but certainly not a cuddly pet.

I thought this was a nice touch and gave you an idea of what you’d be getting yourself into if you bought any of the animals in the shop as pets.  I am a firm believer that people should go into pet ownership with their eyes wide open, so I really appreciated the signs.  As an entomologist, I also really liked being able to see the species name and the country where the animals are actually found.  I think that sort of thing makes them much more interesting.

One problem I had with the store, as cool as it was, was that a lot of the animals for sale were hiding in burrows so that you couldn’t see them.  Honestly, I don’t understand the point of having a pet that spends the majority of its life underground.  If I were going to buy any sort of arthropod, I would definitely choose something that was out and about in the cage like this large fellow: 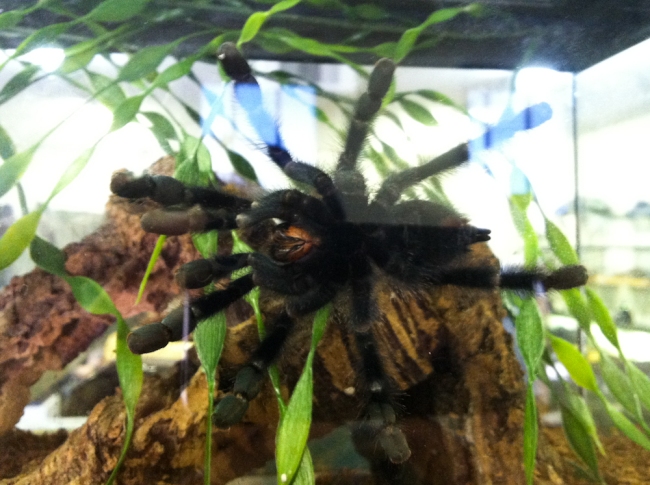 This spider was actually crawling around, and was a gorgeous creature to boot!

In addition to the spiders, scorpions, and millipedes featured in the store, there were a variety of amphibians and reptiles for sale.  My friend and I both fell in love with the baby turtles, only 2 inches long, and were each tempted to get one.  I also really loved the water monitor lizard, though its sign said it was a baby and you could tell it would end up being a pretty gigantic lizard.  It was quite active and interactive, so it was one of the most appealing animals in the store for me.  What can I say?  I’m a dog person and I like my pets to actually acknowledge and appreciate the fact that I’m there.  Spiders just don’t do it for me.

The store had a fair number of animals available, but you could also buy supplies:

The aquariums that were for sale were really nice and I was very tempted to get a new cage for Mr. Rochester, Jane, and Blanche, but I resisted the urge to upgrade my roach quarters.  They just don’t need upgrading right now.  However, there was also a selection of insects in lucite, metal insect sculptures, and hats so there were other ways to spend money that didn’t involve live animals in any way.  I thought that was nice.

Two things really frustrated me about the shop, though, and will likely keep me from going back.  The first was it was really hard to figure out how much anything cost.  According to the NPR story, the tarantulas range in price up to $700 and I went in really wanting to know what a $700 tarantula looked like.  I walked out still wanting to know what a $700 tarantula looks like!  The other issue I had was the distinct lack of insects.  For a shop owned by someone with the words “The Bug Guy” in his name, you’d think there’d be more actual insects, maybe even a bug.  We saw hissing cockroaches and crickets, but no mantids or any of the other insects that are commonly kept as pets.  Maybe they just weren’t out in the store when we went, but nearly every non-reptilian animal was an arachnid of some sort and both my friend and I were disappointed at the lack of insects.  We’d expected more from reading the NPR story, but apparently they were using “bug” the same way as you see in the little tubes full of plastic toys: insects, arachnids, reptiles, and amphibians all mixed together.

Still, it was a fun field trip!  If I were the kind of person who liked to buy spiders, scorpions, or centipedes, I’d be in heaven.  I’m really not though!  Call me crazy, but I like to be able to pick up my pets without worrying about being bitten or stung.  But even if I didn’t buy anything and might not go back, I hope the shop makes it.  It isn’t everyday you can walk into a pet store that caters to people who like the less well-loved creatures of the world, so I’m glad I had the chance to experience one first-hand!

13 thoughts on “Friday 5: A Trip to the Insect Pet Store”