That water out there… Quite inhospitable to insects! (Point Reyes, California)

Last week I mentioned some of the few truly marine insects, the water striders in the genus Halobates. I realized that I haven’t ever talked about marine insects and I think it’s time to rectify that situation! Aquatic insects make up only about 3% of the insects on the planet, but there are only a few hundred species that can be considered at all marine. The vast majority of those are found in estuaries, salt marshes, and other locations where freshwater and marine habitats come together rather than living out in the open ocean. There have been several ideas proposed for why insects have not successfully colonized the ocean, so for Friday 5 this week I give you 5 of those reasons. But first, let me talk about aquatic insects in general.

I know I’ve mentioned it in other posts, but I think it bears repeating: insects evolved on land. There are certainly other arthropods that have lived in marine habitats all along such as the crustaceans, but several million years ago some marine animals (probably crustaceans) crawled onto land and their offspring eventually evolved into insects. Only after they’d established themselves on land did insects begin to colonize water. Insects are thus built for life on land and living in water has presented several challenges that today’s aquatic insects have overcome. But very, very few insects ever colonized the ocean. There’s still a lot of debate about why, but there have been several great ideas put forth, including the following five.

Some insects spend their whole lives in water, including several beetles and true bugs. However, those that do are almost always insects that rely on surface oxygen to breathe and they can’t remain underwater indefinitely. That’s a problem.  It’s hard to be an insect living in the open ocean when you have to stay near the surface. There are lots of things that like to eat tasty little floating protein nuggets, so any insects that tried to colonize the open ocean were likely eaten or faced other problems (lack of places to lay eggs, finding mates in a gigantic ocean, etc) that prevented them from surviving in the ocean. The vast majority of marine insects live in shallow areas along shores, in mangrove swamps, in estuaries, etc, because the habitat is a lot better for them there.

This pelican would likely be happy to eat an insect hanging out near the surface!

This idea has been largely rejected at this point, but it’s been around so long I feel I have to mention it. The idea here is that insects can’t survive in salty water because they have problems regulating salt and water in their bodies in salty waters. However, there are several aquatic insects (especially dragonflies and damselflies) that live in brackish habitats that are far saltier than the ocean. Early insects may have had problems adjusting to the salt levels, but considering current insects have figured out ways to deal with it, it’s likely that the salt didn’t form a barrier for colonization of ocean habitats for insects. 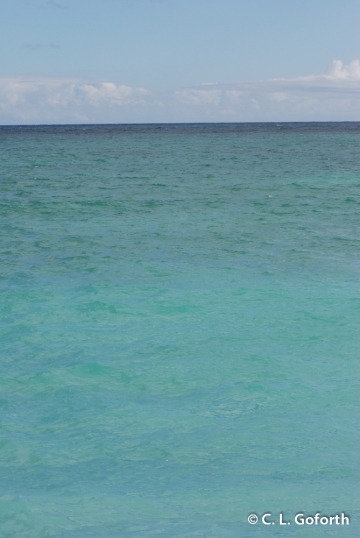 The salty Pacific Ocean at Lanakai on Oahu, Hawaii

3. The respiratory system will collapse at depths where insects can avoid Predation

As I mentioned above, fish and other predators are a problem for insects living out in the open water. In fact, there are hardly any insects that live in open water even in ponds and lakes, just one family of flies call the phantom midges (Family: Chaoboridae). Being out in the open near the light is dangerous – you might as well have a big, blinking “Eat Me!” sign attached! So, diving deep is important if you want to survive. Unfortunately, diving deep enough to put a marine insect out of reach of fish also means that the pressure is likely high enough to collapse the air-filled respiratory tract and the insect will suffocate. This is one of the issues all aquatic insects face: getting enough oxygen in aquatic habitats with a respiratory system that evolved on land. But, if getting enough air means you’re 99% certain to be eaten by a fish… Well, you might need to find somewhere else to live.

Not many places for an insect to hide if it’s floating near the surface in the ocean at San Carlos, Mexico.

4. Insects are more buoyant in salt water than in fresh

Have you ever noticed that you float more easily in the ocean or salt lakes than in freshwater? Well, the same thing happens to air-filled insects. They float very well in marine environments, which means it’s hard for them to dive into deeper waters and, once again, are very vulnerable to predation if they float up near the surface. Better for them to stay along the shores where there are more things to hold on to at the bottom! 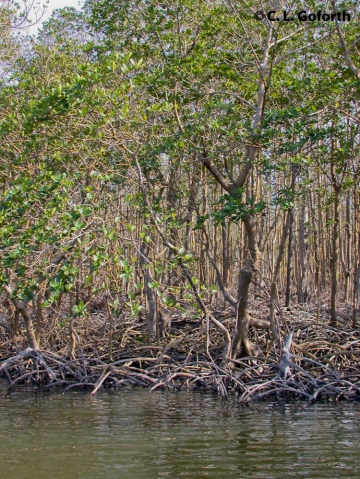 Mangroves are nice, hospitable places for marine insects compared to the open ocean

5. crustaceans fill up all the niches

Even if the insects could make it to the bottom where they’re safe from predators, they might still have a hard time finding a place to hide. Crustaceans are close relatives of insects and have lived in the ocean since before insects evolved, so crustaceans may already live in the places the insects might attempt to colonize.  But, the crustaceans have been there longer and can out-compete their land-evolved brethren. This is my favorite of the ideas about why insects haven’t colonized the ocean, but it remains mostly speculation so far.

A crustacean filling a niche an insect might use?

Though there aren’t very many of them on our planet, marine insects are super cool organisms! If you want to learn more, I recently discovered that the book on marine insects (Marine Insects, edited by the great marine entomologist Lanna Cheng) is available online and as a PDF. I encourage you to check it out! And, the next time you’re by the ocean, looking out over the water, I hope you’ll take a moment to ponder the fact that there is a massive part of our planet where the insects, undeniably one the most successful groups of organisms living on Earth, just can’t survive.  Amazing.  Really amazing.

The open ocean, as seen on a foggy day from Point Reyes, California

24 thoughts on “Friday 5: Five Reasons There Are Few Marine Insects”