The museum where I’m working has an arthropod zoo!  I finally got to spend half a day exploring the museum this week and headed straight for the arthropods.  The exhibit is absolutely beautiful and the sponsor (who I’m not going to name because I can’t say anything nice about them) clearly put a lot of money into it.  If you’re ever in the Research Triangle area, you should definitely make a trip to the North Carolina Museum of Natural Sciences and check it out!  If you do, you might catch a glimpse of the following: 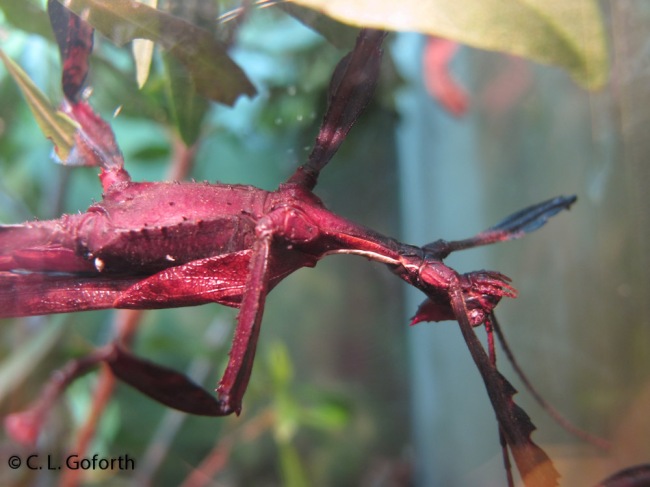 I stupidly didn’t photograph any of the signs (as usual) and forgot what the common and species names of pretty much everything was the moment I walked away from a cage (as usual).  That means I can’t tell you what kind of stick insect this is or where it’s from but they were so cool!  Look at the strange coloration, and all those little angles!  They were large too, 5 or 6 inches long I believe.  I spent about 10 minutes watching these guys to determine whether they were actually alive or not before this one moved its head a fraction of an inch.  Pretty darned stealthy insects!  Sadly, staring at non-moving insects did give me enough time to hear several people walk through the exhibit, loudly exclaiming to their companions how scary insects are and how much they hate them.  Sigh…

If you all haven’t figured it out, I kinda like roaches.  These guys were stunning!  They were quite large and blended in a bit with their environment, but look how beautiful they are!  If all roaches were this pretty, people might not have as many problems with them.

I’m just going to assume that these are the eastern Hercules beetles rather than the Grant’s Hercules beetles that I’m used to from the west, but they’re awfully similar.  Every time I see them I am reminded of how amazing beetles are.  They’re huge and anything with those kinds of horns is alright in my book!  I’ve always wondered if they can actually pinch you with those horns.  Anyone know?

Cecropia caterpillar. This will turn into a big, beautiful moth!

The curator of the Arthropod Zoo really likes cecropia moths, so it seems only fitting that they fill one of the biggest displays.  I’ve caught the moths before and have two in my collection, but I hadn’t ever seen the caterpillars.  Wow!  They’re so beautiful!  And the curator’s going to give me some eggs to rear too.  When I get them, I’ll share their progress with you all so you can see what happens right along with me!

Right next to the Arthropod Zoo is a live butterfly exhibit.  It’s quite small, but I still enjoyed it.  It had a lot of the same butterflies as the slightly larger butterfly exhibit in Tucson, including this butterfly that I photographed at both exhibits.  This exhibit has one thing that Tucson’s does not, though: a sloth!  It was way too high up for me to get a photo of it, but man was the sloth cute! The butterflies were cute too, but considering that they don’t rank very high on my list of favorite insects, I think I actually preferred the sloth…

And with that I need to get some sleep so I can get up tomorrow in time to see what came to the moth traps I helped set up this evening.  The researcher setting the traps is interested in discovering which moths are using a species of native bamboo in North Carolina and we set out two traps.  Hopefully they won’t be completely full of rainwater tomorrow so I can start to learn some of the moths of my new state!

11 thoughts on “Friday 5: Insects of the Arthropod Zoo”