I wrote about June bugs about a year ago and discussed how everyone has their own idea of what makes a June bug based on where they first learned about them.  I got a lot of responses to that post, people sharing what a June bug is to them, and I loved it!  One person even told me that their June bug was red, something completely new.  My June bug has always been a metallic green beetle, Cotinis mutabilis.  I learned that from my dad, who happened to grow up about 2 hours east of where I live now.  When he moved to the west, he latched on to the thing that most closely resembled the June bug from his childhood and taught it to my sister and me.  When I hear the words “June bug,” I automatically think of that gorgeous metallic green beetle I grew up loving.  Anywhere those beetles live will always feel like home.

Now I find myself in a new place with new bugs – and a new June beetle!  Meet Cotinis nitida, the green June beetle: 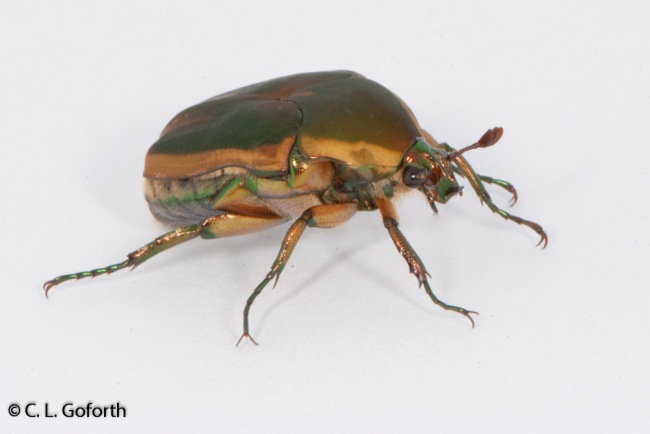 Moving cross-country meant I had to trade in my childhood June bug for this one.  However, it’s darned close to what I grew up with.  Both beetles are silky, smooth green on top and brilliant metallic green with bronze highlights on the bottom: 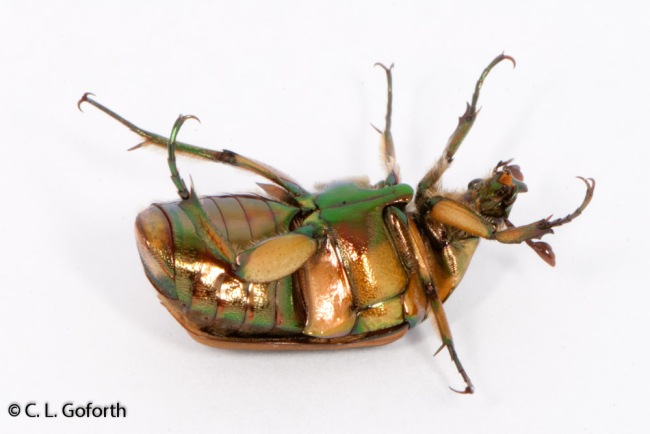 In fact, this beetle is so similar to the June bug I grew up with I might have mistaken it for the exact same beetle if I didn’t know better.  My western June beetle and this eastern one are quite closely related, and I wouldn’t be surprised if there was an area where they hybridized somewhere between their ranges.  There are some subtle differences though.  One is the color on the back.  Though there is a lot of variation in the colors of the elytra (those hardened upper wings characteristic of beetles) on the eastern species, they tend to be a bit more bronze than the western beetles: 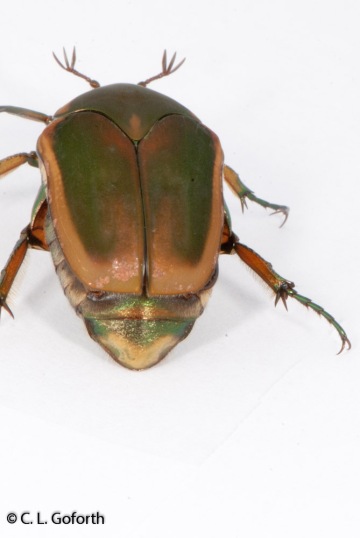 They also have little pale patches on their rumps, though these apparently vary in size quite a bit as well: 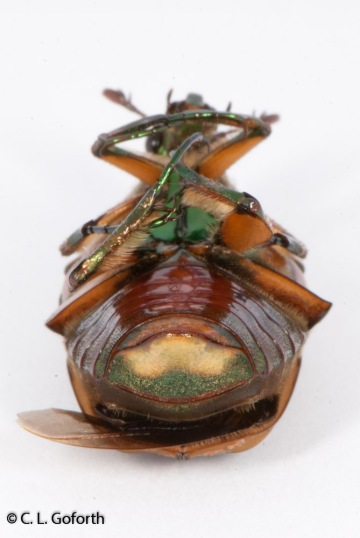 C. mutabilis in the west tends to be mostly to all green on top, lacks the pale rump, and has a slightly longer “horn” protruding off the front of the head.  Otherwise, they’re quite similar in size and shape.

One thing that seems very different to me about this new June bug is the huge number that are out at one time.  There were a few June bugs out when I arrived in North Carolina, about the same number that I was used to seeing in Arizona.  You’d see one or two a day, lazily flying about in the hot, humid air.  Then one day they were everywhere!  I’ve seen thousands and thousands of these beetles flying over the grasses where I work and around the grounds at my apartment complex.  It was like they appeared out of nowhere!  And there were so many of them the even form these little swarms around a lot of trees:

It’s possible that the June bugs in Arizona exploded onto the scene like this too, but I never saw it, and I lived in Arizona for 20 years altogether.  It was pretty amazing to see so many of these beetles flying at once, and they’re still at it!  I have no idea how long to expect them to continue, but I almost always find them swarming around the trees at work.  It’s fantastic!

So, new home = new June beetles.  I couldn’t be happier with either!