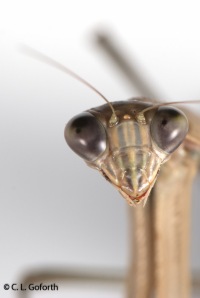 I’ve written about how I love doing outreach events several times in the past, so it should come as no surprise that I jumped at the opportunity to participate in one of the biggest insect festivals in the country.  BugFest is a gigantic celebration of insects and their arthropod relatives put on each year by the North Carolina Museum of Natural Sciences, the museum where I work.  This event is truly huge: over 30,000 people visit the museum on the day of BugFest alone.  Just imagine: 30,000+ people crammed into a museum to learn about bugs!  I absolutely loved it, so let me walk you through my experience.

I started my day with a fantastic mantid (this year’s BugFest theme insect) when I picked it up from my coworker’s house for use in the Prairie Ridge booth:

That’s Brunneria borealis, the stick mantid.  They’re native to North Carolina and are one of the coolest insects I’ve encountered here so far.  Most excitingly, they’re parthenogenetic, so there are no males in this species.  I packed this little guy (or gal) into my car with two other live mantids and the rest of the things that we needed for the Prairie Ridge exhibit at BugFest and off we all went!

Once I arrived at the museum, I quickly set up our table in the Nature Research Center (NRC – the new wing of the museum) so it would be ready when my coworker arrived and changed into my official BugFest staff t-shirt before heading up to the Arthropod Zoo.  The curator, Bill Reynolds, is a great guy and likes for his people to have the best possible day at BugFest.  We were given a lot of freedom to move around and fill in anywhere we were needed, so I spent a good part of the first hour wandering around the fourth floor of the museum talking to the other exhibitors.  I talked to the APHIS people about citizen science projects, learned that there are vet students who want to treat arthropod illnesses (imagine taking your tarantula to the vet – they’re trying to make that possible), did a mantid papercut under the direction of a local papercut artist, applauded the bookstore people for having aquatic insects in their coloring sheet collection, and viewed some live butterflies from the live butterfly exhibit across the hallway: 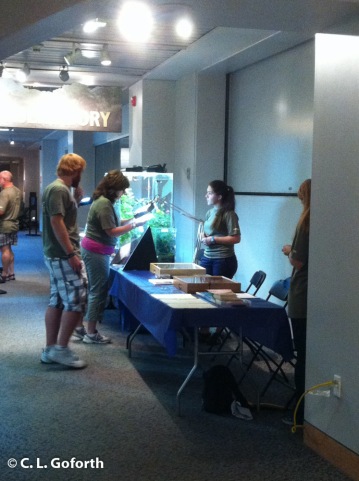 BugFest butterfly table – very early into the morning, before the big crowds started to arrive.

What a great range of things to see!  And that was just the fourth floor, the most sparsely filled space in the main museum building, too.

At that point it was time to see how my coworker was doing at our table in the NRC.  Everything was working well and people were excited about seeing the live mantids that we had on display, so I didn’t stay long.  I made a quick detour through the biodiversity lab: 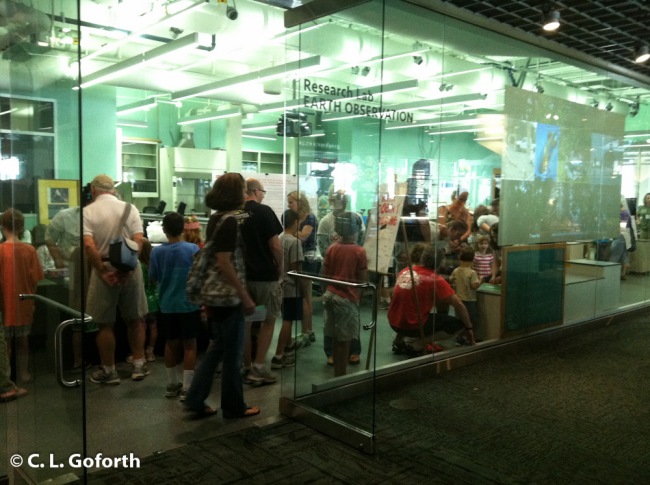 … on my way back to the Arthropod Zoo.  One of the great things about the NRC are these labs, glass enclosed research spaces where scientists go about doing their science as usual, but behind glass where everyone can see them.  For BugFest, however, the research labs were open and people were streaming through.  There’s always something interesting happening in the lab pictured during these big museum events, so it’s a great place to visit.

I planned to check in at the Arthropod Zoo to see if anything specific needed to be done before making rounds to check on exhibitors, but I got sidetracked: Art Evans was there with his friend Chris Wirth, getting a behind the scenes tour from Bill.  I had made plans to have lunch with Art that day anyway, but I was delighted to talk with the three of them for ten or fifteen minutes.  Art’s book An Inordinate Fondness for Beetles has been one of my most treasured books since I was in high school, so I couldn’t have been happier to finally meet him.

I had promised that I would man the Prairie Ridge table so everyone else could have a lunch break, so I went back to the NRC.  The crowds were getting bigger at that point:

BugFest crowds!  This was the last photo I took of the crowds – after this it was so crowded I spent all my time simply trying to get from point A to point B and didn’t stop to take photos.

… so it was more difficult to get through.  It was worth it though: I had carefully scheduled my time at the table so that I could see the one talk I didn’t want to miss, Mark Moffett’s:

The Daily Planet Theater has a 40 foot tall presentation screen and I’ve got to say that Mark Moffett fills that space beautifully!  He is a very entertaining speaker (I recommend his bot fly YouTube video as a great example of his speaking style, even though it’s quite gross) and seeing his National Geographic photos on that screen was really something.  I was lucky that the traffic to our booth was slow enough and we were close enough to the theater that I caught most of his talk.

Then it was time for lunch!  I spent the next hour chatting with Art and Chris over tasty Mediterranean food and it was an entirely pleasant hour.  I couldn’t have asked for better lunch companions!

After that, it was a whirlwind of activity.  I saw a brief talk that Bill gave on North Carolina’s insects, helped man the eastern Hercules beetle cart, chatted briefly with a friend I haven’t seen for a few years, manned the Prairie Ridge table for another hour, and packed everything up when I was done.  I helped organize a few things in the Arthropod Zoo and was headed out when BugFest’s organizer told me that one of my former Insect Behavior students had asked if I was around.  He’s a grad student in Wake Forest now, so I went to say hi before I left and was thrilled to see that he’s doing so well.  There’s nothing more gratifying than seeing one of your students (especially the good ones you really hope will go on and do something great) presenting their awesome research at something like BugFest.

What a great day!  I didn’t have a chance to see everything (and I barely even touched on the things I saw and learned here) and the crowds were absolutely insane after I got back from lunch, but I went home in a lovely euphoric state.  I learned new things, made some new professional contacts, promoted Prairie Ridge, got to play with cool bugs, talked to several people I know, and got to meet Art Evans.  My first BugFest was fantastic – and I can’t wait to do it all again next year!