I am quite possibly the worst pumpkin carver of all time.  I can only remember a handful of successfully carved pumpkins in my entire life, and I have a freakishly long memory.  Most of my best pumpkins were carved when I was very young and stuck to the simple designs.  This could have very well been the last pumpkin I did that looked halfway decent when I was done carving: 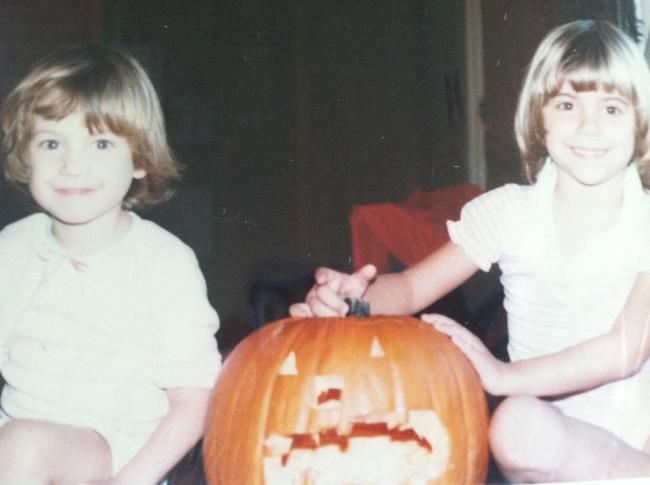 Me and my sis

You can probably tell from looking at me in the photo (I’m the one on the right) that this was not a recent photo.  I was probably 6, 7 at the very oldest, in that photo.  See, we didn’t try to do anything fancy with that pumpkin and I think that was why it was successful.  A few triangles for eyes, a square for a nose, and what looks like a fairly sorry attempt at making a toothy grin.  But hey, we were 6 and 4 (or maybe 7 and 5), so I give myself credit for not cutting myself horribly with the knife AND ending up with something that looks rather like a Jack o’ Lantern.

Since then, things have gone downhill.  When I was in junior high, they started selling those fancy pumpkin carving kits that had patterns and little plastic knives.  Disaster!  You know how hard it is to cut through a crusty old pumpkin with a plastic knife?  You can barely get a sharp kitchen knife through those!  Still, year after year I would try to carve something amazing with a 2 inch long serrated plastic monstrosity.  Without fail, I would spend an hour carving one of the patterns perfectly, then cut through the all important support piece and watch my beautiful design crumple into a steaming pile of crap.  Ah, pumpkin, my old nemesis!  I hate those little buggers, yet I keep at it year after year.

Last year I decided to go a different route.  I’d seen all those cool pumpkins that had just the surface carved rather than cutting all the way through and thought, “Hey, I can do that!”  I’ve carved wooden sculptures and kachina dolls in the past and I do linoleum block printing as a hobby.  I’ve got skills, and I was FINALLY going to make my masterpiece!  I carved and carved and had this gloriously intricate design with a dragonfly on a cattail filled pond done.  It was masterful!  So, I lit the candle inside, carefully replaced the top just so, and prepared to awe my neighbors.  Then…

Nothing!  I hadn’t carved deep enough for the light to show through the pumpkin and it wasn’t glowing at all.  I decided to shave a little off the inside of the pumpkin, thin it up a bit so it would glow, and used my handy melon baller to start scooping the back away from my design.  And then I punched a big hole right in the middle of the design.  It was toast.  I was sad.  I consoled myself with toasted pumpkin seeds, the only good thing that had ever come out of my pumpkin carving obsession.  I might not be able to carve one of them buggers, but at least I can toast a mean pumpkin seed.

A month ago, I followed the siren call to the pumpkin carving kit aisle in Target.  I’d been down that road so many times before, yet there I was, a glutton for pumpkin-induced punishment once again, looking at cruddy tools I KNEW weren’t going to work when there it was: THE SOLUTION!  It was a pumpkin carving kit that was INTENDED to be a surface only design.  You didn’t even have to cut the top off the pumpkin, just shave off the dark orange skin and reveal the lighter orange underneath.  The tool was ridiculous and looked, I kid you not, exactly like a disposable razor.  It came with 4 little interchangeable blades, one for each of four different styles of lines.  I was so excited by the possibilities that I bought the set.  Then I headed to my neighborhood grocery store, bought the two (TWO!) least horrible looking pumpkins of the five seriously deformed pumpkins they had available, and plopped down on my back patio to carve.

Not surprisingly, the little safety razor looking tool was a bust.  I’d decided to carve a tiger beetle-like beetle on the first of my pumpkins, but I relearned a lesson I’ve learned oh-so-many times before: pumpkins have REALLY thick skin.  A piece of cheap plastic with a tiny piece of minimally sharp metal just isn’t going to cut it.  I spent a good 30 minutes carving and out came a sad little tiger beetle-like beetle:

My stupid little $2 safety razor/pumpkin carver was a total bust.  What did I expect?  Given my track record with pumpkins, a $2 safety orange disposable razor wasn’t going to perform miracles.  But… I liked the concept of the surface-only carving…  And, didn’t I have a whole box of wood carving tools upstairs…?

So I grabbed my wood carving tools and started to carve a giant water bug on my second pumpkin.  I plunged the wood carver into the thick skin and it went right through!  It went almost exactly where I wanted it to!  10 short minutes later, I had the best pumpkin carving I’d ever done:

I made the legs a little too long, but look at those wing veins on the hemielytra!  Flushed with success, I quickly carved another design on the same pumpkin, a jumping spider:

I was on a roll, so I did another beetle on the pumpkin with the crappy tiger beetle-like beetle on it, just so it wasn’t a total reject pumpkin:

I was just going to do a generic predaceous diving beetle, but then I got cocky and decided to make the “Charlie brown beetle,” as my students always called Thermonectus nigrofasciatus.  I made the legs too long, but it was STILL better than the vast majority of my life’s pumpkin carving work.  Finally I added a third carving to the water bug/jumping spider pumpkin:

I decided to stop when my ant ended up with a crazy giant head and no neck.  Clearly, my success had gone to my head and it was time to put the tools away.

This year, I have enjoyed my toasted pumpkin seeds more than ever, knowing that my pumpkins are actually displayed out on my front walk.  I had to put SOMETHING out there.  I live in the ‘burbs.  My neighborhood’s Home Owner’s Association is having a Halloween decoration contest and people seem to be rabidly competing for the top prize.  It’s like the Halloween aisle of Target exploded all over my neighborhood.  Then there’s our house, which until yesterday had absolutely nothing going for it except our creepy black shutters and a sorry little maple tree that was deformed when a tornado hit it a few years ago.  But, we’re no longer the only house with no Halloween decorations.  Now we’re the people with the fashionable insect pumpkins.  Life is good.