Central North Carolina’s weather has been a bit schizophrenic recently, alternating wildly between warm and cold, seemingly at random.  I keep thinking this sort of switching will kill off the last of the insects, but I am constantly proven wrong.  Every time it gets warm, the insects reappear.  Many of the pollinators are taking advantage of the late-blooming flowers at Prairie Ridge, the aromatic asters, frost asters, and narrow-leafed sunflowers:

There are quite a few flowers in bloom right now, so I keep seeing pollinators.  There are lots of honey bees out still:

That particular shrub is no longer in bloom, but the honey bees have simply moved on to other things that provide the nectar they crave.  There are lots of other bees out too, including bumblebees (my favorites):

Bumblebees and carpenter bees look rather similar in this part of the country, but you can tell them apart pretty easily.  Fuzzy butt = bumblebee.  Smooth, shiny butt = carpenter bee.   I’m sure there are behavioral difference between the two I’ve yet to see too, but I haven’t been around them quite long enough to notice them.

There are other Hymenoptera out and about too.  I was introduced to the existence of scoliids earlier this year, and I have been shocked by how many different types of them I’ve seen in North Carolina!  I love the white patches on this one: 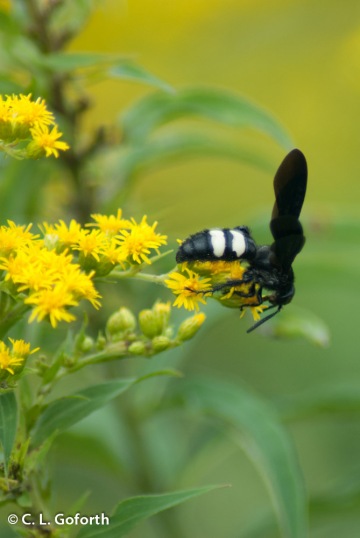 It looks almost elegant!  Scoliids, if you don’t recall, are parasites that lay their eggs on scarab larvae.  We’ve got tons of eastern green June beetles at Prairie Ridge, among other species, so there are probably a lot of scoliids around because due to our wormy bounty.  I haven’t seen many of these around recently, but every now and again I’ll come across a straggler.

I’m not entirely surprised to see bees and wasps around this late in the year, but I have been surprised by all the butterflies.  There are still quite a few sulphurs flying around:

I’ve also seen some American Ladies, a few whites, and a few skippers.  It seems odd to see them in November, but I’ve been told this isn’t completely unusual.  What seems very really odd, however, are the number of caterpillars we’re still seeing.  We’ve had a few very cold nights already, but the caterpillars keep on going on.  The monarchs were out until just a few weeks ago, but seeing as I haven’t made any sightings since then, I assume they’re done for the year.  However, one of my coworkers JUST found one of these:

There have been flies all over the flowers too, doing their part to help plants reproduce.  Flies provide valuable pollination services, though they certainly aren’t as widely beloved as the butterflies and the bees.  Although it’s not pollination, the flies are also helping another species spread its genes around: 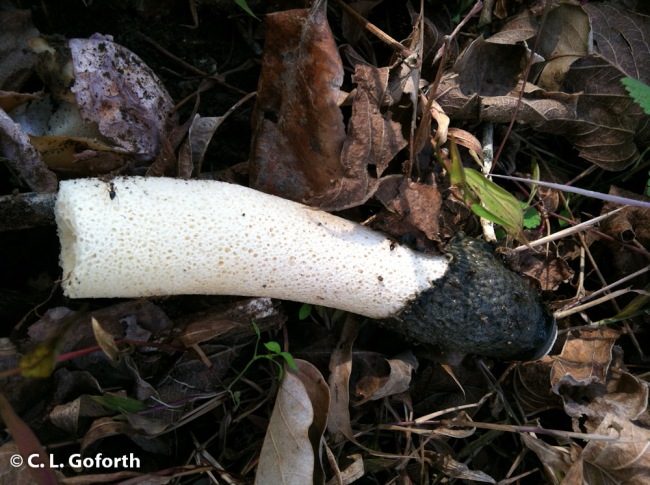 Flies are important to stinkhorn fungi and help spread fungal spores to new areas.  I’ve become very good at finding these mushrooms based on their smell and I enjoy looking to see what insects they’ve got crawling on them.  Typically I see flies, lots of flies.  Over the weekend, however, I found several stinkhorns that had ants all over them, including this one.  I wonder if the ants are helping spread fungal spores around too…

I suspect I’ll continue to see pollinators as long as there are occasional warm days and plentiful flowers.  I have no idea how much longer I should expect them to last, but in the meantime I’ll enjoy seeing all the flowers and hearing the happy buzzing sound coming from the prairie.