Yesterday I had a meeting where we were discussing citizen science ideas.  We brought up the Lost Ladybug Project to the woman we were meeting with and I assured her that even though it might not seem like she couldn’t do the project now, in January, that I had just that morning found a live ladybug outside my office.  A few minutes later, the woman spotted a ladybug crawling on the window behind me.  (If that didn’t reinforce my point, I’m not sure what would!)  I turned to the window to scoop the ladybug up and happened to notice something.  There was a huge, gorgeous, amazing (but dead) beetle in there!  After the woman left, I returned to the windowsill to retrieve the beetle.  It was spectacular!  But it wasn’t the only thing in there.  In fact, there were five different species of insects in there.  You all know what I do with 5 of any insect related things.  Friday 5!  Today, I bring you the dead insect biodiversity of that windowsill.

I have to say that even though it would have been more exciting to find this guy alive, this is one spectacular beetle!  This also had to be about the easiest beetle I’ve ever tried to ID online.  Found it in less than 30 seconds: the sculptured pine borer, Chalcophora virginiensis.  This beetle is about an inch long with a lot of great texture.  I’m going to make a block print of this one!  The texture is wonderful and it would make a fabulous graphic. 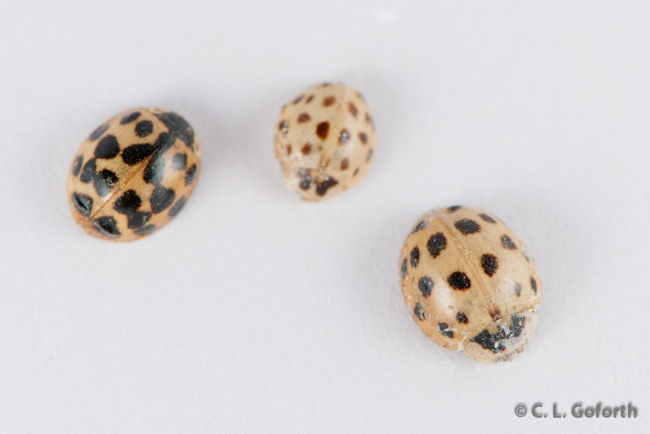 There are a lot of multicolored Asian ladybugs (Harmonia axyridis) in North Carolina.  As the name suggests, they come in a shocking array of different colors.  I believe all the ladybugs in this photo are the same species.  They’re pretty, but they’re not native to the US either. 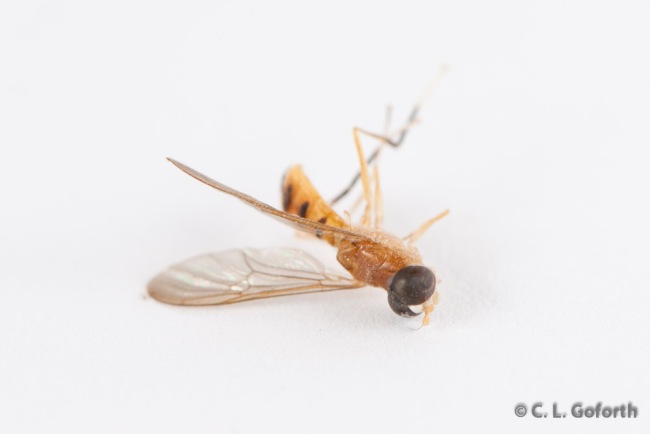 I really don’t know my flies very well, but I thought this fly was rather elegant.  It was reasonably large, about a half-inch, and skinny.  A hover fly perhaps?  Any of the fly people out there want to help me out?  I’ve got a good, clear shot of the wing veination if you need it!

(Note: Thanks to Morgan Jackson for identifying this fly as a soldier fly in the family Stratiomyidae and the genus Ptecticus.  According to Morgan, it’s typically found around compost or decaying vegetation and leaf litter.  You’re the best Morgan!)

This was, surprisingly, the only insect that was missing its head before I removed it from the windowsill.  This one was a lovely pale green on the back, and quite a pretty little bug.  I never did find its head though.  Perhaps decapitation was the cause of death? 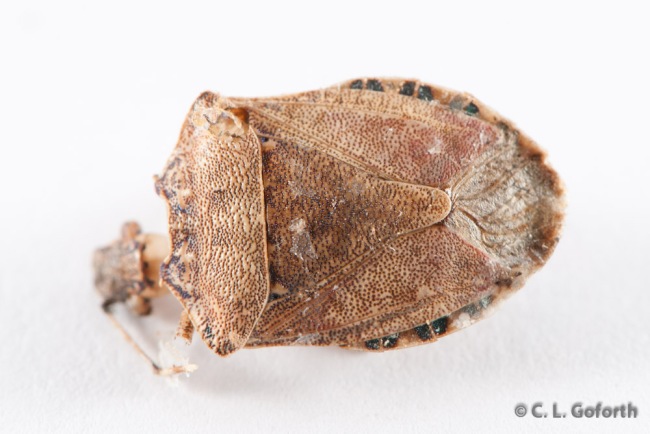 Ah, the brown marmorated stink bug, Halyomorpha halys.  We hadn’t really gotten them in Arizona yet by the time I moved, but there sure are a lot of them here!  They come into buildings during the winter and I’ve seen several live ones over the last month or so.  This one looked like it had languished in the windowsill for some time though – dry and very crispy.  You’ll notice the head is detached in this photo.  That’s my fault – knocked it right off when I was setting it up for the photograph.  Grrr…  I hate it when I do things like that!

Looking at that windowsill was more exciting than I’d expected it to be!  It prompted me to start looking in some of the other windowsills and the light fixture above my desk to see what I could find.  The latter was a goldmine!  Perhaps I’ll share those finds with you sometime too.  :)

Have a great weekend everyone!

16 thoughts on “Friday 5: Biodiversity of a Windowsill”