Last weekend I led a public program for work that focused on how people can use nature photos to help scientists by submitting them to a variety of citizen science projects.  I really love doing this program as the people who sign up tend to be REALLY excited about documenting the natural world with their cameras, just like me.  I get people with all sorts of cameras too – really cruddy cell phone cameras all the way up to pro-level photo gear – but somehow the group dynamic just works.  We do a bit of introductory stuff in the classroom and then spend a lot of time practicing our photography and learning about the flora and fauna of North Carolina.  It is a ton of fun!

Last weekend, the morning started off very foggy.  It was supposed to clear off in the afternoon and become a magnificent day, but it was still dark and gloomy only an hour before the program.  Then, all of a sudden, the fog was gone!  The sun came out.  It was 75 degrees!  Toward the end of the program, I was roasting and started stripping layers off and ended up in a tee-shirt.  It was great.  And, not surprisingly, we found several invertebrates active, taking advantage of the most beautifully perfect winter day I could imagine.  Here are some of the spineless creatures we saw!

My most recent group of photographers got really into flipping logs!  We found all sorts of things lurking under them, including this colony of ants.  We have a lot of fire ants in the south, so it was nice to flip up a log, see several hundred ants underneath, and NOT have them come after you, stingers a blazin’, for daring to disturb their nest.  These ants seemed pretty docile as close to a dozen photographers snapped shots of them and the guy holding the log didn’t get stung once.  This was one of my better ant experiences actually.  I tend to have mostly bad ant experiences of the stingy, bitey kind… 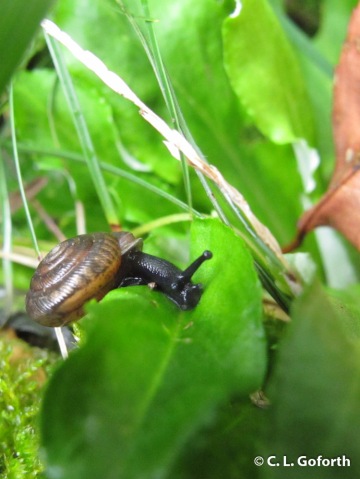 There’s something about snails that I love.  I think it’s the eye stalks.  In fact, I’m sure that it’s the eye stalks.  Those things make snails look adorable.  Of course, snails are also important herbivores and detritivores, so they play an important role in the environment that shouldn’t be overlooked.  And, because I can’t think of snails without also thinking about this, I encourage you to watch the snail animated short that Miniscule did a few years back.  You WILL fall absolutely in love with snails after watching it!

Nearly every log I’ve flipped in North Carolina so far has housed at least one millipede under it.  This particular log had a lot of them.  All those little white things…  Those are all millipedes, and there were probably about 100 of them under this one log in a big mass.  Someone’s been getting busy procreating under this log.  :)

Did you know these guys (pill bugs, sow bugs, rolly polys, etc) are actually little land crustaceans?  I’ve always wondered whether they taste like the crustaceans people like to eat, such as lobsters and crabs.  (Don’t suppose any of you out there have tasted one so you can tell me what they taste like?  Because I don’t eat crustaceans.)  Like the millipedes in the previous photo, pillbugs are decomposers and are very important in forested areas like the one where I found this one.  There, they turn dead trees into soils so more trees can grow so more pillbugs can turn them into soil so…

And finally, I present this beetle:

It never fails!  I tell a group of people that, because it’s been rather chilly the last few weeks, we’re unlikely to find many insects out and about.  Then we started flipping logs and found several insects and insect relatives.  One woman in the group was particularly interested in learning how to take better insect photos and was thus highly motivated to find as many as she could.  This was the largest insect we saw active while we were all together, a darkling beetle that was about an inch long.  It sat there and posed for quite some time as several photographers stuck their cameras right in its face to snap some shots of it.  It was even kind enough to sit on a lovely backdrop of dead leaves!  I thought it was rather beautiful, and I was glad we got to see at least one insect that wasn’t hidden under a log.

Turns out there were other things out as well, but I got wrapped up in helping people identify plants and birds and insects and answering questions about Prairie Ridge and I had to stop taking photos myself.  Sigh…  That’s what happens when you’re leading a group program though!  And it was worth it.  It was a gorgeous day and the group I spent it with a lot of fun, so it was a great day overall!

Not sure how many insects I’ll see for the next few weeks.  It finally snowed last night, so they might stay out of sight for a while as they wait out the cold.  Still, I hope I can bring more winter insects to you all soon!