It’s finally spring! Everything is turning green and there are insects everywhere again. Needless to say, I’m super excited! It’s still early in the green part of the year, so there are even better things to come, but I have to say that I’ve thoroughly enjoyed my first real spring so far.  I’ll always miss the wildflower explosion in Arizona, but wow is spring in North Carolina impressive!

The insects have been amazing recently! I’m starting to see things like this at the pond:

This is prime evidence that the dragonflies are becoming active, leftovers from the transformation from nymph (immature) to adult.  Those little white things are the lining of the last nymphal respiratory system, all of which is replaced every time an insect molts.  This dragonfly exoskeleton can only mean one thing: there are adult dragonflies out and about!  And there are lots of them.  There aren’t very many species yet, but I’ve seen green darners more than once, I just saw my first eastern pondhawks as few days ago, and there are dozens and dozens of these: 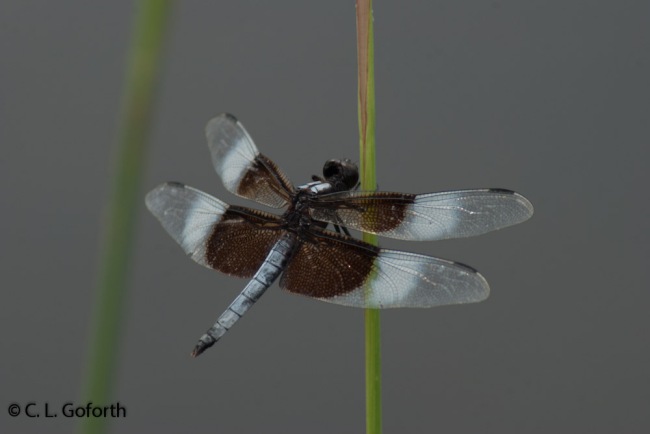 Common whitetails are, well, common at the pond at Prairie Ridge, but look how beautiful they are! What a gorgeous animal. The pattern on the wings is spectacular and the whites are currently really bright (I took this shot last summer, later in the season), so these are showy and beautiful residents at the pond. Now, if only the comet darners would come back…

There have also been a ton of these:

Can you see the eastern carpenter bee male hovering over that mess of mulch? The male carpenter bees have been defending territories around all wooden structures at Prairie Ridge recently. You can watch the females going in and out of the nests they’ve excavated vertically into beams and roofing supports.  I know they’re mildly destructive and we should probably try to discourage them from building nests in our wooden structures, but they’re just so darned charismatic!  And, you can tell the males from the females really easily and shock your friends when you pick up a large bee without being stung.  Stingers are modified egg-laying tubes (ovipositors), so only females can sting.  The bee in the photo is a male, as evident from the yellow (sometimes white) patch on his face and is incapable of stinging.  They keep finding their way into our classroom building, so I just pick them up and take them back outside.

Lots of our big butterflies are back! One of my coworkers spotted a zebra swallowtail last week and another saw a red spotted purple yesterday. Me, I’ve only seen the eastern tiger swallowtails so far: 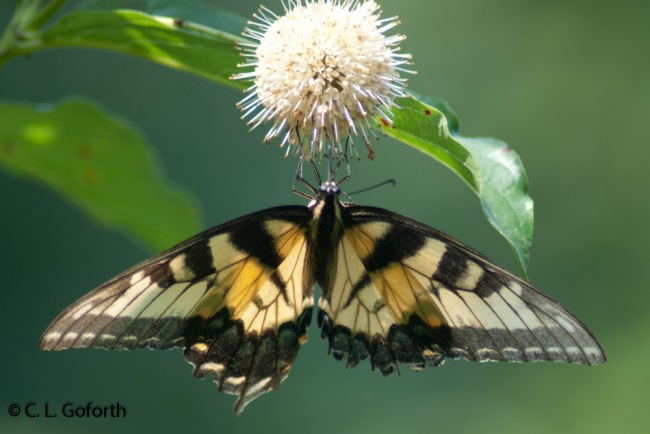 They may not be quite as exciting as the zebra swallowtails as they’re much more commonly seen, but they’re still impressive.  The larvae feed on a variety of tree species, many of which we have on the grounds at Prairie Ridge, so I see them all the time.

A friend of mine saw fireflies lighting up on a warm night recently, quite early in the year. She’s an entomologist so I am confident that she knows what she’s talking about, but it’s so early in the year that the news felt wrong when she told me. But sure enough, I found this a few days later:

Firefly! In April! Wow. That’s just cool. I’ve been keeping an eye out for flashes in the early evening, but I’ve yet to see any myself. Rest assured that I will go frolic with them when I start to see them! I have a happy little firefly dance that I’ve done just about every time I’ve ever seen fireflies. I’ve never lived in a place that had them before, so getting to see them was always a rare treat and thhey were always a source of great joy when I was a kid. I guess I never outgrew that thrilled wonder that fireflies provoke and I don’t really care what people think of me, so I still run around chasing and catching them, even as an adult.  These days I don’t keep them in jars overnight because I don’t like waking up to a pile of dead fireflies, but I have an artificial firefly in a jar that I keep on my desk at work.  It makes me smile every time I bump it and it lights up and starts “flying” around inside the jar.

Of course, there are still a ton of these out: 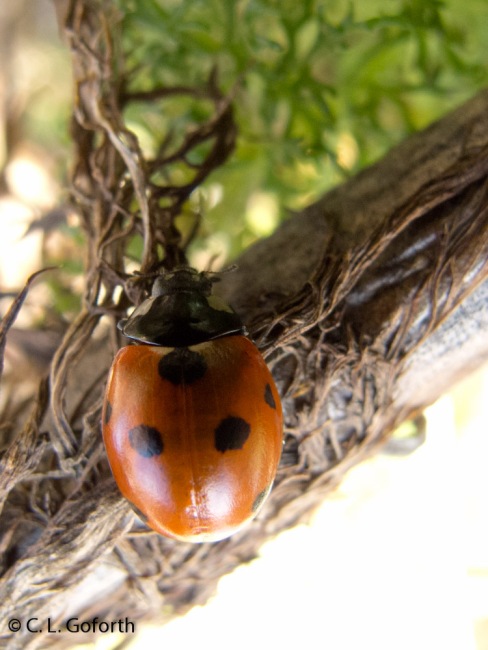 Non-native ladybugs abound in Raleigh. I have to wonder why we have SO many of them here, but I see 9 non-natives for every 10 ladybugs I see. Sigh…

You all know how much I love jumping spiders!  This species seems to love the trailer where my office is located.  I’ve seen dozens of them on the trailer over the past 10 months, so it gets me wondering why they seem to like it so well.  Whatever the reason, I’m happy that I get to see so many.  They’re adorable, so who wouldn’t want them hanging out around them?

That’s just a little taste of what’s happening in the bug world here.  I’m super excited to see how the rest of spring and summer turn out.  There are still so many new things to learn and see in North Carolina!  While I often finding myself telling people that I don’t know when asked about natural things when I lead walks, I’m getting a lot better.  I think all the new learning opportunities, the new discoveries, have been the best part of my move to the south.  While I love Arizona and miss so many things about it, it’s also great to be in a place where everything is new and exciting, where I’ve finally gotten to see a real spring so I understand what all the excitement is about. I wonder what I’ll learn next?!