Guess what? After I shared my aquatic insect photo setup on Monday, the wonderful photographer I learned it from, Steve Maxson, got in touch with me and said I could share a few of his photos with you! So, I wanted to give you a sample of the images that inspired me to start photographing aquatic insects the way I described in my post on Monday. I think you’ll be impressed, as I am!

All those little red blobby things on the bug are mites, sucking away at its blood. (Aside: for whatever reason, I see tons of mites on Lethocerus and very few on the back brooding giant water bugs, Abedus and Belostoma. Wonder why…) The mites are always kinda gross, but I can’t help but be fascinated by them. Mites. They’re pretty cool little arachnids! And did you know that Lethocerus have eyelashes? Okay, they’re not like our eyelashes, but there is a dense fringe of hair behind their eyes that certainly looks like eyelashes. You can see it in the photo!

Next up is a photo of a predaceous diving beetle larva breathing at the surface:

I think that is a fantastic photo showing a really cool larva doing a neat behavior. I love this shot! And here’s an adult predaceous diving beetle, doing essentially the same thing, without the really long tail: 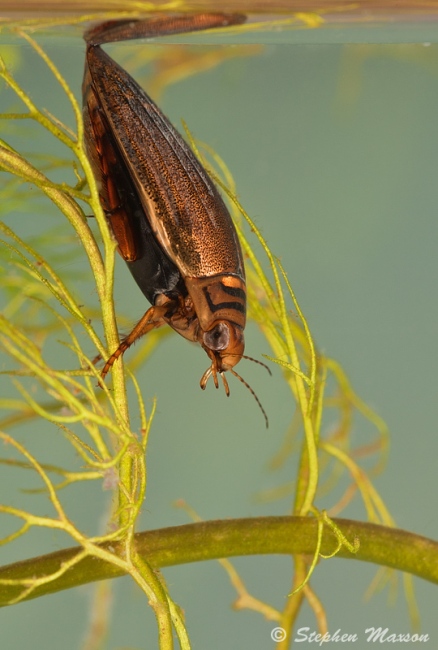 And last but not least, here’s a water boatman:

According to Steve, this image is a focus-stacked composite of 19 shots, done in Zerene Stacker. Super cool! You can see the little scoop-shaped front legs, the long, oar-like hind legs, and the air bubble that helps it breathe really well in this shot. These bugs always remind me of T. rex: itty, bitty front legs! But those legs are good at what they do too, scooping up algae and holding it near their mouthparts so they can eat. Unlike most other aquatic true bugs, there guys are vegetarians.

Steve also sent a photo of his aquatic insect photo studio setup, in case any of you are interested in seeing how his differs from mine:

He uses a bigger aquarium than I do (2.5 gallon), so he uses a piece of Plexiglass to keep the bugs close to the front of the aquarium. You can see that sticking out of the top. Also, Steve likes to have natural vegetation in his shots, so you can see the plants in the aquarium. I rarely use plants myself, but I have to admit that, looking at these shots again, they do add to the ambiance of the images quite nicely. Might need to reconsider my “no clutter” stance! Finally, you’ll notice that this is located in a garage or workroom and isn’t sitting on the dining table like it is at my house. I’ll bet my husband wished I didn’t take everything indoors! It would certainly cut down on the number of times I find escapees, like the one I shared yesterday. :)

So those are a few shots by Steve Maxson, the inspiration behind my current aquatic insect photography practices! If you’d like to see more of his photos, and I highly encourage you to do so, he’s got a whole gallery of aquatic insects that you can view on BirdPhotographers.net. You’ll have to make a Bird Photographers account to view them, but I think it’s worth it. Lots of other great aquatic insects to see!

Thanks, Steve, for letting me share some of your photos. I really appreciate it!

Update: Steve’s wife tells me that his tank is actually in their basement and they do occasionally find loose aquatic insects flying around their house. Guess I’m not the only one with this problem! :)