Last week was the busy week from hell for me at work.  It was program after program after program all week, including Saturday.  In spite of my exhaustion and the fact that I’d already taught hundreds of people many different things, I spent last Friday at a middle school in rural eastern North Carolina teaching nearly 250 6th and 7th about my experiences as a scientist working with aquatic insects.  Essentially, I talked for about 5.5 hours straight.  And when I say talked, I really mean that I yelled over the many conversations going on and the window-mounted air conditioner and was to the point I could barely even speak by the end of the day.  So, I went home, didn’t talk the rest of the night, and photographed a bunch of the bugs I shared with the kids.  Today, I give you five factoids about some of the insects I shared with those 250 rural North Carolinian middle schoolers (who knew WAY more about aquatic insects than your average urban kid) on that completely exhausting, but exhilarating, day.

1. Ever see the Alien movies?  The dragonfly nymph mouthpart is rather like that little mouth inside the alien’s mouth. 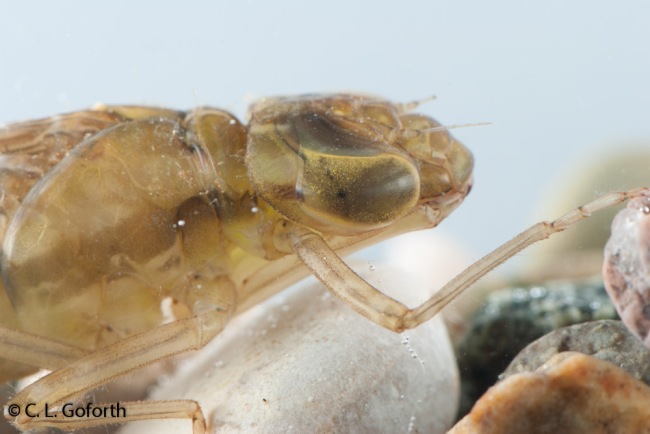 Dragonfly and damselfly nymphs have one of the coolest mouthparts ever!  It’s essentially a long, flat grabber that they keep folded up under their heads.  When they encounter something they want to eat, they squeeze a lot of blood into their heads, which causes the mouthpart (the labium) to shoot out away from the body.  (Thus, the allusion to the Alien movies!)  Hooks on the end of the labium grab the unfortunate animal and then everything is quickly retracted, bringing the still living animal into contact with the dragonfly’s chewing mouthparts so it can be eaten.  This all happens really fast.  It’s a pretty amazing, yet somewhat gruesome spectacle.

2. Dragonfly nymphs breathe through their butts. 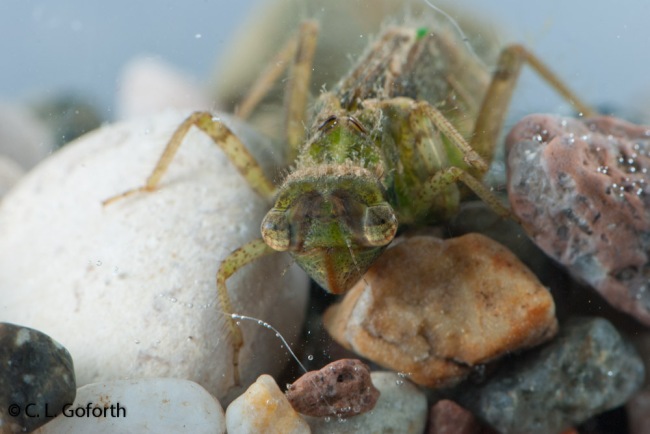 Dragonfly nymphs are gill breathers and absorb oxygen through the water via their gills, but their gills aren’t on the outside of their bodies. Instead, they are packed inside a rectal gill chamber, which is inside the body.  The nymphs pump water into and out of their back ends, moving water over the gills inside the rectal gill chambers and stirring everything around so they can breathe more efficiently.  Thus, they breathe through their butts!  Imagine a super giggly 4-year-old girl.  Now imagine a 6th or 7th grade boy sounding just like that.  You say “dragonflies breathe through their butts” and giggling ensues, every time!

3. Damselflies breathe through gills at the end of their abdomens.

While studies have shown that nymphal damselflies can live without their gills, the gills vastly increase the amount of oxygen the nymphs can absorb.  They’re quite pretty too, with a long, slender leaf-like shape.  damselflies also use those gills to help them swim, making them look a lot like fish as they dart through the water.  It’s a pretty cool movement!

4. Giant water bugs are among the tiny handful of insects that exhibit paternal parental care.

You know what’s interesting?  You ask a group of 6th or 7th graders if anyone wants to guess what “paternal parental care” is and you’re met with a bunch of blank stares.  Then you tell them that you’re going to give them a hint and ask, “Who knows what a paternity test is for?” and a dozen hands shoot up instantly!  It’s fun to watch the gears grinding in their heads as it suddenly dawns on them that they can use the meaning of one word (“paternity”) that they know to understand what another unknown word (“paternal”) means.  I love those moments!  Every single class I talked to was able to work it out without my telling them based on their surprisingly vast knowledge of what a paternity test was for.

I talked a lot about aquatic insect adaptations to water while talking with the middle schoolers, especially respiratory adaptations.  I started by asking the kids this question: if you suddenly decided that you wanted to go live underwater in a pond, what would you need to survive?  I would listen to the kids come up with ideas (take a snorkel, bring flippers so you can swim, learn how to hunt food while swimming, etc) and then tell them that insects had come up with nearly all the same ways to deal with living in water that they had suggested.  I led the students into admitting that getting enough oxygen should be their top priority.  Then we discussed ways that people can get oxygen while they’re in water, and I demonstrated each method they described with live insects that did the same thing.  There were the breath holders, the snorkelers, and the gill breathers, but the kids really loved the idea of the SCUBA divers.  Insects like the predaceous diving beetle above have a space under their wings that they use to store air, rather like a SCUBA tank, and then use that air to breathe while they’re underwater.  Just like a person with a SCUBA tank, eventually the air runs out and the beetle needs to return to the surface to refill its “tank,” but then it can dive underwater again.  It’s a pretty neat trick if you think about it!  And, when you can relate it something a human can do, I find that it’s a lot easier for kids to understand.

Ah, middle school kids.  They’re an adventure!  They have an unbelievable amount of energy and an intense need to look cool, but you can still get them excited about things if you are animated and show them amazing new things.  I really enjoyed that school visit, and as tired and hoarse as I was at the end of the day, it was a totally worthwhile and fun experience.  Might even volunteer to do it again next year!