I didn’t give you any heads up about why I haven’t blogged at all in the last few weeks, but I’ve been out of town.  If you read my blog regularly, you likely know that my father recently passed away, so my sister and I had to go to California to clean out his house.  We spent a week just cleaning out my dad’s garage.  That will likely be one of the most physically exhausting experiences of my entire life, 14+ hours a day hauling heavy boxes out and deciding what to do with the contents.  Plus, the whole garage was full of deer mice, so the risk of getting hantavirus was enough that we felt that we needed real safety gear.  Let me tell you that having sweat pooled inside a respirator is a very unpleasant experience.  And did I mention that ¼ of the things in that garage were rocks?  My dad was a mineral collector for nearly three decades and the evidence was in his garage.  The last two days we were in California were devoted entirely to sorting and hauling rocks.  They were some of the most mind bendingly beautiful minerals I’ve ever seen, so it was sort of fun, but we still moved rocks for two entire days.  If there’s anything you really don’t want to do after many very long days of hauling things, it having two whole days of hauling even heavier things at the end of it.

So what does this have to do with insects, you might be thinking?  Because all things here relate to insects somehow, right?  Allow me to change gears here for a moment.  Over the past few years, I have received a large number of e mails that contain a story about someone the sender loved who has died.  These people have told me stories about mothers, fathers, siblings, and children who have been killed or died from illnesses.  They’re sometimes heartbreaking stories of hurt and loss.  But there’s one thing that ties these stories together: they all feature dragonflies.  The stories typically go like this.  Someone in a family has passed away, often suddenly or after a long, horrible illness.  At some point after this person has died, the author of the e mail has noticed dragonflies, sometimes large numbers of them.  These might be around a grave site, at the deceased person’s home, or some other meaningful spot that’s attached to memories of the departed.  The people sharing these stories take immense comfort in the presence of the dragonflies.  They’re beautiful stories, and people share them with me for, I believe, one of two reasons, 1) because I love dragonflies and they just want to tell their story to someone who would appreciate the experience they had, or 2) because they’ve read somewhere that dragonflies are the souls of departed loved ones returned to Earth to reassure their loved ones that they’re doing okay in the afterlife.  They want to know what I think about that, whether it’s true.

As much as I really love that people choose me, of all people, to send these stories to, I can’t help but think it’s a little odd that someone would write to a stranger to ask what essentially amounts to this: has my loved one reached some sort of happy afterlife?  To ask a scientist whether dragonflies are spiritual messengers from beyond the grave seems odder still, and I hate that my answer isn’t the one that I know what they want to hear, that I do not personally believe this is true.  What can I say – I’m a scientist and my spiritual belief system is complicated, but it doesn’t include dragonflies as representatives of the afterlife.  However, I am absolutely not the type of person who would ever tell someone they’re wrong about their own spiritual beliefs.  I am not convinced that I am right and that other people are wrong, so I tell them that no, I do not believe in the idea of dragonflies as departed souls, but who knows?  The world is a strange and wonderful and terrible place and who am I to tell them that they’re wrong about something they believe?  I am probably the least qualified person to make judgments about their beliefs, so I tell them that and thank them for choosing to share their story with me.  I tell them that I’m sorry for their loss, but I am very happy that the dragonflies gave them comfort when they needed it.  Sometimes people write again to thank me for the response, sometimes not, but I respond to every one of those stories because I feel I should.  The person on the other end needs that response. 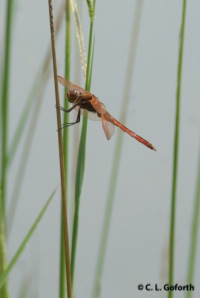 So let’s go back to that garage in California.  My sister and I had a dumpster delivered to my dad’s house because, honestly, he had a lot of junk in his garage that wasn’t fit for donation due to mouse contamination.  So, we started dumping those things in the dumpster.  I chucked my first thing into the dumpster and looked up to see a dragonfly.  It was flying around, up above the dumpster, a clubtail of some sort, while we were cleaning.  Later that day I saw a few more hovering around in the yard.  The next day I saw dozens, though they were spread out over the course of the day.  My sister even noticed a few of them, and she rarely notices insects.  There weren’t a lot of dragonflies at any given time, but the funny thing is this: I’ve been to my dad’s house several times, and I’ve NEVER seen a dragonfly there before.  Yet here they were!  Lots of them flying around as my sister and I cleaned and sorted and packed and discarded the miscellaneous flotsam and jetsam of a life recently ended.

I still don’t believe in the idea of dragonflies representing the returning souls of the dead.  I don’t think I’m ever going to.  But those dragonflies made me pause for a moment and think of all those sad and beautiful stories people have sent me over the years, the belief that so many people have about dragonflies and the afterlife.  Just for a moment, I almost believed myself.  At that moment, I wanted to believe, and I suddenly understood why so many people hold onto this idea so strongly that they would share it with a total stranger half way across the world.  But, even if those dragonflies weren’t my dad looking down as my sister and I did a physically and emotionally draining task, it made me stop and think about him. Every time one flew by, I remembered and smiled.

For that alone, I will always be grateful to those dragonflies.