A while back, I wrote about the microhabitats in the stream where I work and mentioned how the stream is missing some insects I would expect to see in this area.  Most significantly, it’s missing the swimmers.  I haven’t seen a single swimmer in the creek, and I’ve gone looking for insects dozens of times.  The absence of swimmers is curious.  To be missing things like the predaceous diving beetles and the water scavenger beetles…  Well, that just doesn’t happen!  That suggests that there is something happening in the stream that prevents those groups of insects from establishing themselves, and it presents a nice little puzzle to solve scientifically.  With the help of a group of high schoolers and a couple interns, I’ve been monitoring several characteristics of the creek.  The water quality isn’t bad, so it is unlikely to blame for the lack of swimmers.  However, there is another, more likely explanation: flooding.

The Prairie Ridge creek is small, but it drains a large part of the surrounding area.  Let’s take a look at a map for a moment: 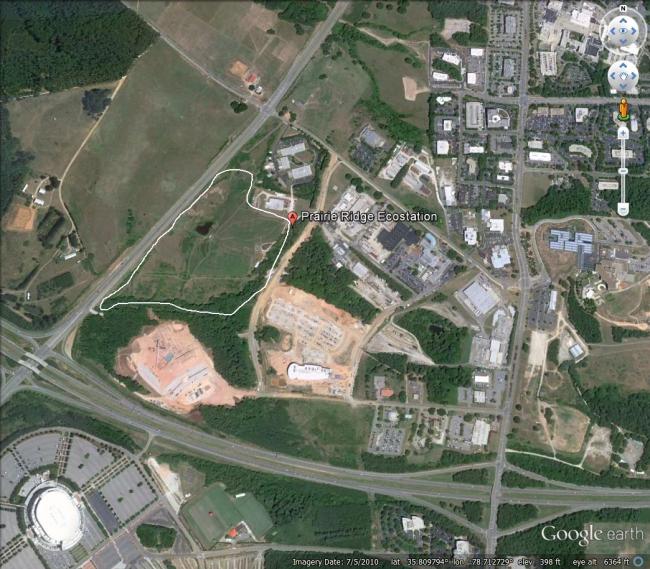 A lot of the land to the right of or below Prairie Ridge (outlined in white) on the map drains into our creek.  Everything that is dirt in the center of the map is currently covered in either asphalt or buildings, neither of which absorbs water well.  So, every time it rains, the water runs downhill and ends up in our creek.  The result: we get a big pulse of water entering the creek with every rain event.  Small rain events cause a bump in the stream flow, just enough to make everything look muddy for a few hours, maybe overnight:

Significant rain events, however, can cause the water to rise so quickly and the flow to blast downstream so hard that it carves new channels, rips banks down, pulls trees out by the roots, and washes it all downstream.  It’s impressive to watch the water in that creek during long and/or heavy rains!  It flows hard and very fast.

Now imagine a little beetle in the stream.  Heck, let’s imagine a big beetle, one of the Cybister predaceous diving beetles that are over an inch long and strong swimmers.  It’s there minding its business, swimming around a deep pool and hunting for food, when it starts to rain.  What do you think happens to that beetle when a huge pulse of water suddenly washes into the stream?  When there’s enough water to rip whole sections of the bank away?: 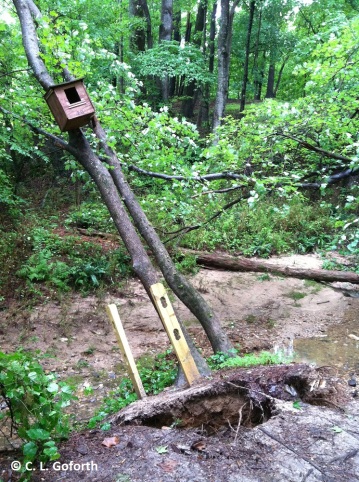 The substrate of this stream is mostly sand and small cobbles with few larger rocks.  When it rains hard and you get a big pulse of water flowing downstream, that water picks up the lightweight substrates in the stream and washes them away.  That means that not only is there water flowing downstream very quickly and powerfully, but that it’s churning up sand and rocks as it goes.  Now think about that beetle again.  It’s not built to hold on during floods.  It’s got legs adapted for swimming, not clinging, and probably couldn’t hold on if it tried.  It’s left exposed, so down the stream it goes!  It may be carried miles downstream, assuming that it manages to escape being sandblasted by the churning, roiling mix of water and sand along the way.

We do find some insects in the creek, and they tell an important story.  There are caddisflies, tightly attached to the underside of heavy rocks.  Those rocks will move if the water is flowing hard enough, but for the most part they stay in place.  If you’re a small insect in a stream, living under one of those rocks is smart.  We also have calopterygid damselflies (the jewelwings) lurking in the root mass on the upper left side of this photo:

More of those roots are exposed every time a flood moves down the creek and the tree will likely fall over one day, but for now it provides a safe haven from floods for clinging insects like damselflies.  I imagine that they hold on for dear life in floods, hoping they won’t be swept downstream.

We’ve found a few black fly larvae in our samples, insects that use silk to secure themselves to the tops of rocks.  In good black fly habitat, you might see thousands of them coating the rocks in huge mats.  Our stream is not good black fly habitat because we’ve only found a few black flies, but that’s not surprising.  Sitting on top of a rock, even a big, stable rock, isn’t necessarily the safest place to be in a flood.  Imagine standing on top of a house, or clinging to a tall tree, as a huge tornado is headed your way.  You can hold on as tightly as you can, but there’s still a good chance you’ll be knocked from your perch or mortally injured if something big hits you as the tornado engulfs you.

We find insects in the protected areas of the stream, but they are conspicuously absent from other areas.  The pooled areas are wholly devoid of insects, which leads to other interesting questions.  Are the insects colonizing the creek, only to be washed downstream in the first big rain?  Are they colonizing, then starving because there isn’t enough food available?  Or are they actively avoiding colonizing this creek altogether?  I hope someday I’ll be able to test these questions, but for now they’re merely interesting questions to ponder.

With the ease and speed with which the creek rises and falls, it’s little wonder that it’s missing a few groups of insects!  I’ll write about this project again when we have more concrete evidence to explain what’s happening in the stream, but for now I leave you with this thought: water moving downhill is an amazing, terrible, and awe-inspiring force of nature.  It carves canyons and carries with it the power of life and death.  There are few things water can’t move when there’s enough of it, so give it some respect!  You won’t be sorry you did.

5 thoughts on “The Power of Water Moving Downhill”